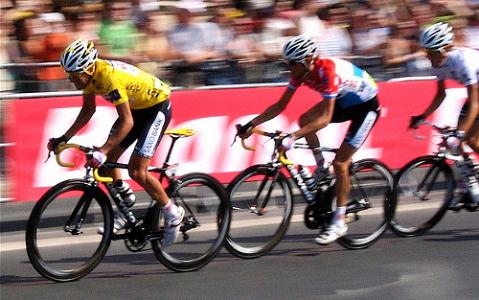 You don’t have to be a cycling fan to have heard of the Tour de France. It’s considered to be the top race in the sport, and because it occurs during one of the biggest tourist months of the year it’s possible your path will cross with the Tour even if you’re not in France just to see the race. The route changes every year, so it can be confusing to keep up with if you’re not a cycling fan, but there are some classic points which turn up repeatedly and which are well-known for being great places to watch the race.

Each year, as mentioned above, the Tour de France route is different – it’ll go through different towns, over different mountain passes, include different kinds of stages. More predictable is the overall direction which the races goes, however. Every other year it changes from moving in a general clockwise to a general counter-clockwise direction. In 2009, the route is clockwise – but don’t try to set your watch by this crazy route. I’ve only been paying attention to cycling since 1996, but it’s the wackiest Tour de France route I’ve ever seen. 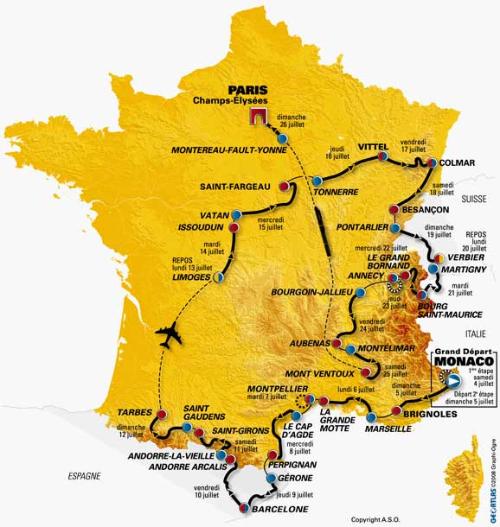 The race kicks off in the richest city-state on earth on the streets of Monaco (some of which are also used for the famous Formula 1 Grand Prix held there each year – methinks bike tires will leave much less rubber on the roads) and will wind its way gradually west along the French Riviera and into the Pyrenees (even dipping into Andorra and Spain, and heading as far south as Barcelona). Then the race pops up into the center of the country, points itself east and then south when it runs into the border. En route to the French Alps, the race crosses into Switzerland and Italy before climbing into the mountains, and then there’s a ride on the TGV for all the cyclists before the final traditional day which ends in Paris on the Champs-Elysees.

Among the things that make this route so notable are:

Although I could go on and on about how interesting I think this route is (and how much I’d love to go chasing the Tour around for the entire three weeks), I’m guessing that if you’re going to be in France for something other than the Tour you’d just like to know which ones are the most interesting stages. So, be sure to check out my suggestions for the best places to watch the 2009 Tour de France!

To get more information about the 2009 race, either to prepare for your trip or to follow the Tour, these are the websites I particularly like:

original photo at the top by: Celso Flores