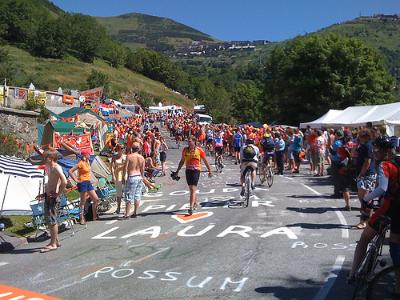 The Tour de France takes over the country each year in July, and although most French people watch the coverage on TV rather than going out of their way to see it in person I think there are definitely worse ways to spend an afternoon or even a whole day than by picnicking along the Tour’s route and waiting for the riders to go by.

If you’ve scored cheap international airfare and you’ll be in France in July 2009, you’ll want to figure out whether the race is going to be anywhere near you during your trip; and if it is, you might want to check it out up close and personal. Here, then, are my suggestions for the best places to watch the 2009 Tour de France.

Unfortunately, easily the best stage to see any Tour de France – the iconic Alpe d’Huez, which even the pro cyclists themselves recommend if you’ve only got one shot at seeing this famous race – isn’t in this year’s route. I know, I know – but there are other great stages in the 2009 route.

In general, the things to know about this or any cycling event are that while the carnival-like atmosphere is typically reserved for the starting or finishing towns of any given stage, the riders will be zipping through them (and other towns along the flat parts of any day) so quickly that you won’t get to see them much. If you want to just soak up the atmosphere, then that’s fine – but if you actually want to see the cyclists for more than a few seconds then your best bet is to pick a spot alongside one of the mountains where you can watch them in what feels like slow motion as they slog their way uphill.