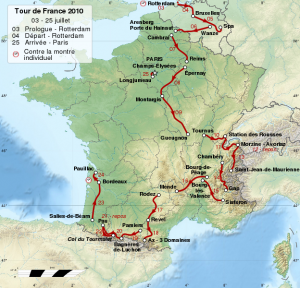 Gentlemen, start your engines! OK, OK, wrong sport – but have you seen how fast those guys can go? For the French and millions of cycling fans throughout the world, today marks the start of the highlight of the year with the 2010 Tour de France. It starts in very non-French Rotterdam, goes through kind-of French Belgium, and hits actual France on July 6 through Sunday, July 25, when the cyclists cross the finish line on the historic Champs-Elysées in Paris.
A lot of people plan vacations to France around seeing as much of the Tour as possible, choosing their itinerary to catch the (sometimes, literal) high points of the route. But if you happen to find yourself in France over the next few weeks and want to catch the action without hijacking your whole vacation, then we’re going to tell you the best places to watch the 2010 Tour de France.
>>Read about France in July, and what to wear in France in the summer.

Lance Armstrong has predicted that “there will be carnage” at this stage, on day three of the Tour de France, because of cobblestoned roads at the finish in Arenberg. I don’t know about you, but that sounds pretty awesome in an “I only watch car races for the crashes and hockey games for the fights” kind of way.
There is no direct train to Arenberg proper – it’s a tiny place – but a three-hour train ride from the Gare du Nord in Paris will get you to Wallers, the beginning of the last leg of this stage. While there is a dearth of additional sightseeing to do in this area, it’s big with fans and you can get a feel for just how insanely huge the Tour is in France, and if you’re game you can take local transit to the finish line. Soak up the atmosphere, watch the cyclists hunker down for the hell that lies ahead, and you’ll be back in Paris in time for dinner.

Again, this stage’s finish is an easy day trip from Paris’ Gare du l’Est, clocking in at two hours on the regular train and a fast 45 minutes on the TGV – but it’s in the heart of the Champagne region, as in cocktails darling, and Reims is home to one of the most spectacular cathedrals in France. Take a cellar tour at Taittinger, spend a cool hour or two inside the cathedral, walk around the pedestrian-friendly city, and then toast the cyclists as they cross the finish line in Reims with some Piper-Heidsieck or my personal favorite, Veuve-Clicquot.

There are many reasons to choose this stage of the Tour de France as the big one to watch. So many, in fact, we’re going straight to bullet points: 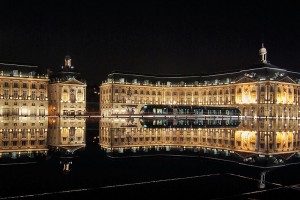 Most Tour de France stages end in one city and begin in another one entirely. In fact, from the end of stage 19 in Pauillac to the start of stage 20 in Longjumeau, the distance is so far they take a train! But every year, there are a few stages that stop and start in the same place – and this year, one of those cities is none other than Bordeaux.
The cyclists are due to arrive in Bordeaux around 5:00PM on the 23rd, and push off around 8:30AM on the 24th. What does this mean for you? Weekend in Bordeaux, baby! Visit some vineyards, see the sights in town, and party with Tour de France fans from all around the world.

The starting point for stage 20, Longjumeau, is just outside of Paris near Orly Airport. It finishes on the Champs-Elysées in Paris after an Indy-500-like eight laps from the Place de la Concorde. It’s one of those things you simply have to see in your lifetime, because it’s incredible and SO FRENCH and possibly the most exciting thing that happens on that street all year long, by far.
But, it’s crowded. And hot. And did I mention crowded? Luckily for you, though, the public transportation system of Metropolitan Paris lets you have your pick of places to watch the last stage. They’re all going to be crowded, but not nearly as much as the Champs – and you’ll still be able to catch the fevered energy of the final stretch.
Here’s what you want to do: