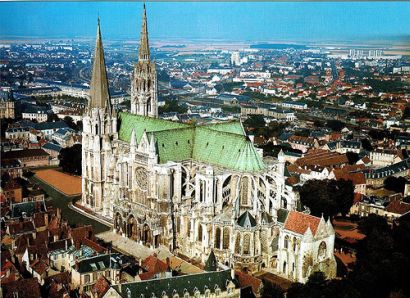 France is home to some of the world’s most spectacular cathedrals. With spires reaching toward the sky, buttresses a-flying, magnificent sculptures and colorful stained glass, cathedrals in France will leave you wondering how in the heck they were able to build such magnificent structures.
Many people are probably not aware that a cathedral is not named as such because of its size, but is technically defined as a Christian church that contains the seat of a bishop. In fact, the word cathedral comes from the Latin word cathedra, which means seat. Cathedrals serve as the center of a dioceses (an administrative region governed by a bishop) for Roman Catholic, Anglican, Orthodox and Lutheran churches.
While  a cathedral was mostly as place of worship in the community, because cathedrals symbolize both the glory of God and the power of the Church, cathedrals in France tend to be enormous, ornate feats of architecture. Cathedrals are frequently one of the oldest buildings in smaller towns, their size and splendor often confusingly out of proportion with the village that surrounds it. 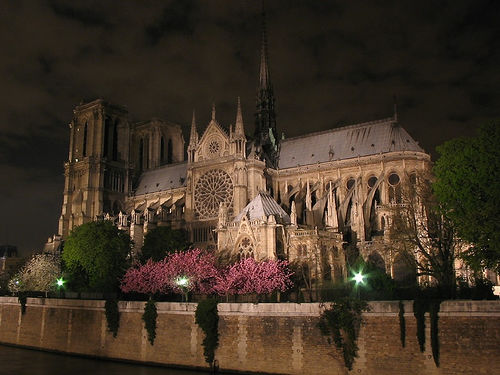 Notre Dame will certainly live up to your expectations, despite its fame. Depicted in countless books and movies (and serving as the haunt of everyone’s favorite hunchback), Notre Dame has long captured the imagination of visitors. This Gothic cathedral dates back to the 12th century and is best-known for its intricate gargoyles, which adorn the outside of the cathedral. Its position on an island in the Seine also gives you a unique opportunity to view the entire structure from afar. 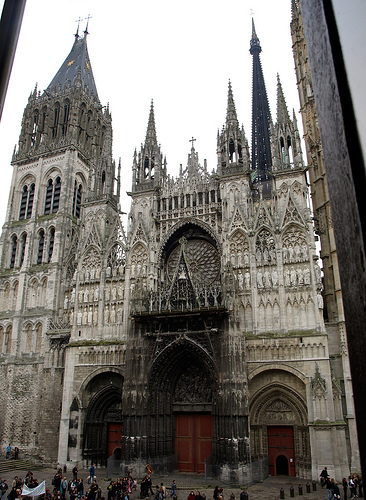 Rouen has been dubbed the “City of a Hundred Spires” for its many churches—and towering above them all is the highest spire in France, gracing the top of Cathedral Notre-Dame de Rouen. This is the cathedral immortalized by Claude Monet in a series of paintings. It was originally built in 1063 but a fire destroyed all but one spire on the cathedral; most of the present day cathedral was built in 13th century. Try to attend a Sunday mass to hear the echoing interior of this amazing cathedral.
>>Read more about the Cathedral at Rouen: The inspiration for Monet’s famous series 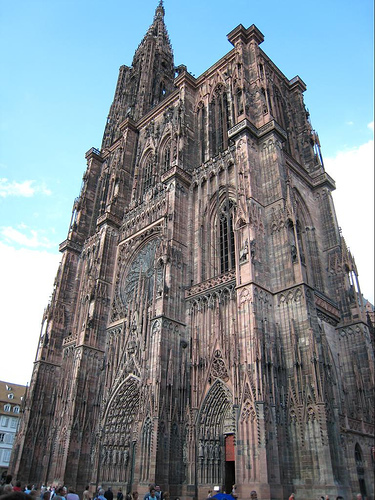 This feat of Gothic architecture in northeastern France was once described as a “pinky-red angel hovering over the city” by French poet and playwright Paul Claudel. Goethe once said that the cathedral is composed of “a thousand harmonizing details” and that the cathedral was like “like the most sublime, wide-spreading tree of God, proclaiming the glory of the Lord.” It only has one spire, although that single spire was actually the highest for four centuries. However, the Strasbourg Cathedral is probably best known for the hundreds of beautiful stained glass windows that give a particularly colorful hue to the inside of the cathedral when the sun is shining. 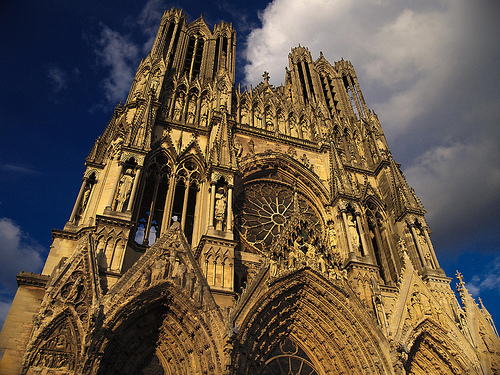 Located near the birthplace of Champagne, the cathedral at Reims stands at the site of the basilica where Clovis was baptized in the 5th century. The present cathedral was completed in the 13th century and the impressive façade was extensively renovated and repaired by the French National Assembly in the late 19th century. The front of the cathedral features three portals with many statues, and a giant rose-window framed in the central arch. The “gallery of kings” also has statues of Clovis and his successors. 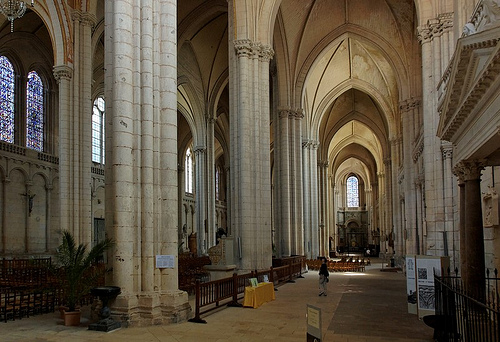 The Cathedral Saint-Pierre in Poitiers showcases a blend of Gothic and Romanesque styles. Similar to many of the major cathedrals in France, the Poitiers cathedral was built over the site of a Roman basilica, and consecrated in 1379. The most impressive feature of this cathedral is the interior’s high vaulted ceilings and the surprising amount of light. 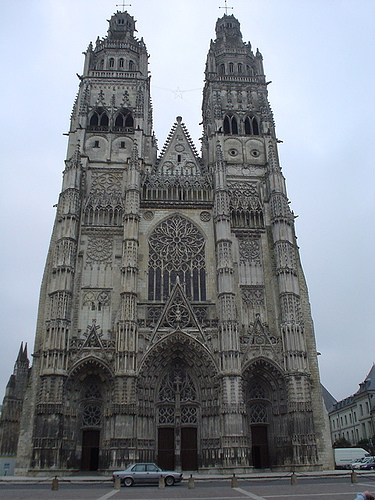 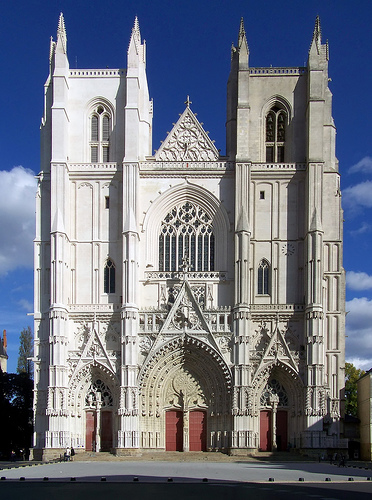 Although this cathedral took pretty much forever to complete (construction began in 1434 and didn’t finish until the 19th century), this cathedral is remarkable architecturally harmonious. Two square towers dominate the façade and give the cathedral an austere look. However, the Nantes cathedral has an airy  interior with 120-foot vaulted ceilings (higher than Notre Dame in Paris). The Nantes Cathedral is probably best known for housing the Renaissance tomb of François II (Duke of Brittany), among other notable historic figures, in the crypt. 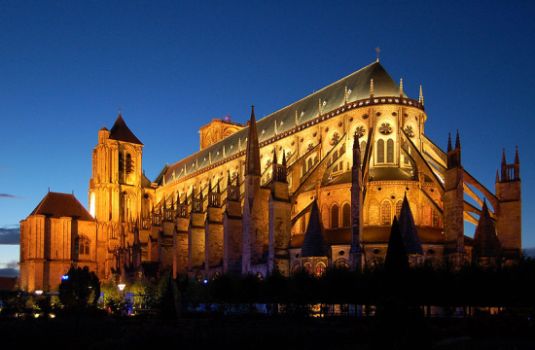 While you may be distracted by all the Castles of the Loire nearby, the Cathedral St-Etienne in Bourges is a magnificent example of early Gothic architecture. In fact, because of its unique architectural elements, the Bourges cathedral is a UNESCO World Heritage site. It has no transepts, which form the cross-shape of most churches. On the exterior, thick walls and a myriad of flying buttresses support the unbroken weight of the long nave. 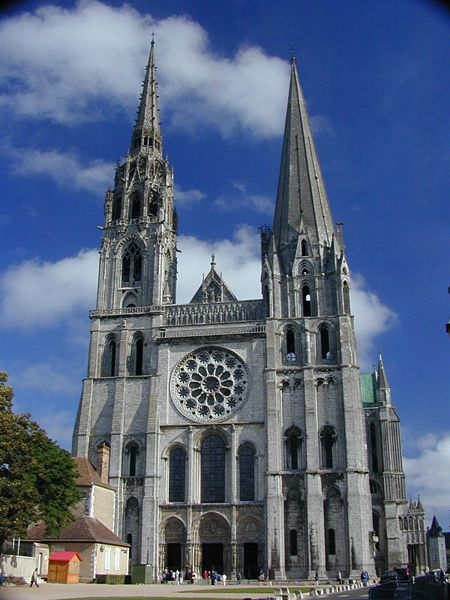 Since the cathedral was never damaged or looted during the French Revolution or two World Wars, this cathedral remains marvelously in tact and boasting original features many of the other cathedrals lack. Chartres Cathedral is also extremely well preserved; the extensive sculptures at the portals and stained glass windows are all original. This French Gothic masterpiece, just 50 miles from Paris, has been a destination for pilgrims since the Middle Ages. It also houses the Sancta Camisisa (the tunic of the Virgin Mary). 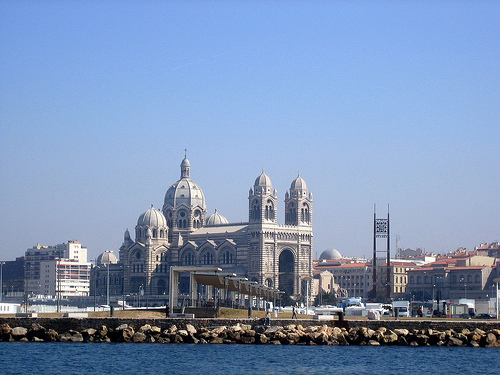 While many of France’s famous cathedrals showcase Gothic and Renaissance architecture and built many centuries ago, the Marseille Cathedral was built on an enormous scale in Byzantine-Roman style during the 19th century and has been declared a national monument in France. 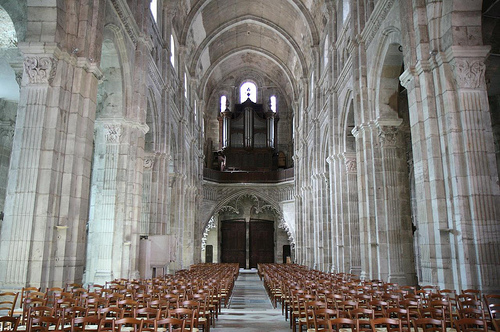 The Cathedral Saint-Lazare in Autun (in the heart of Burgundy) is one of the most important Romanesque churches in France. While later additions to the cathedral show off some Gothic architectural elements, the cathedral is most noted for its impressive Romanesque sculptures that adorn the outside. The cathedral at Autun has also been a major pilgrimage site for centuries, as the castle holds the relics of Lazarus (who, in Roman Catholicism, is the brother of Mary Magdalene). 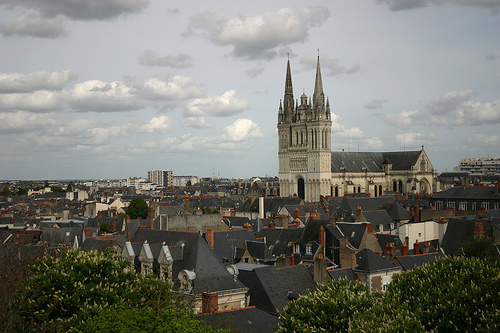 Another cathedral in the shadow of the Castles of the Loire, the Angers cathedral showcases a blend of Romanesque and Gothic architecture and was built during the 12th and 13th centuries. The Anger cathedral is probably best known for housing one of the most famous collections of Medieval tapestries in Europe, which were made especially for the church.
>>Visiting Angers from Paris? Read about Getting from Paris to the Loire Valley 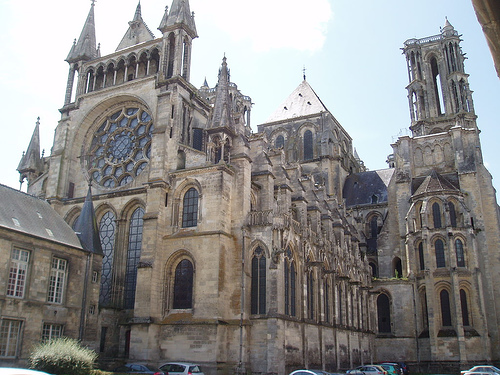 The cathedral at Laon has long been a stop on the medieval pilgrimage route to Santiago, Spain. The cathedral has six ornate towers (four of which are complete) that feature sculptures (some of oxen, which pay tribute to the animals that helped in the construction of the cathedral). The cathedral also features beautiful stained glass windows and a rhinoceros gargoyle over one of the front portals.
Photos: top photo (Chartres); Notre Dame ; Rouen ; Strasbourg; Reims; Poitiers ; Tours ; Nantes; Bourges ; Chartres; Marseille ; Autun; Angers ; Laon