The Nice Side of Cemeteries 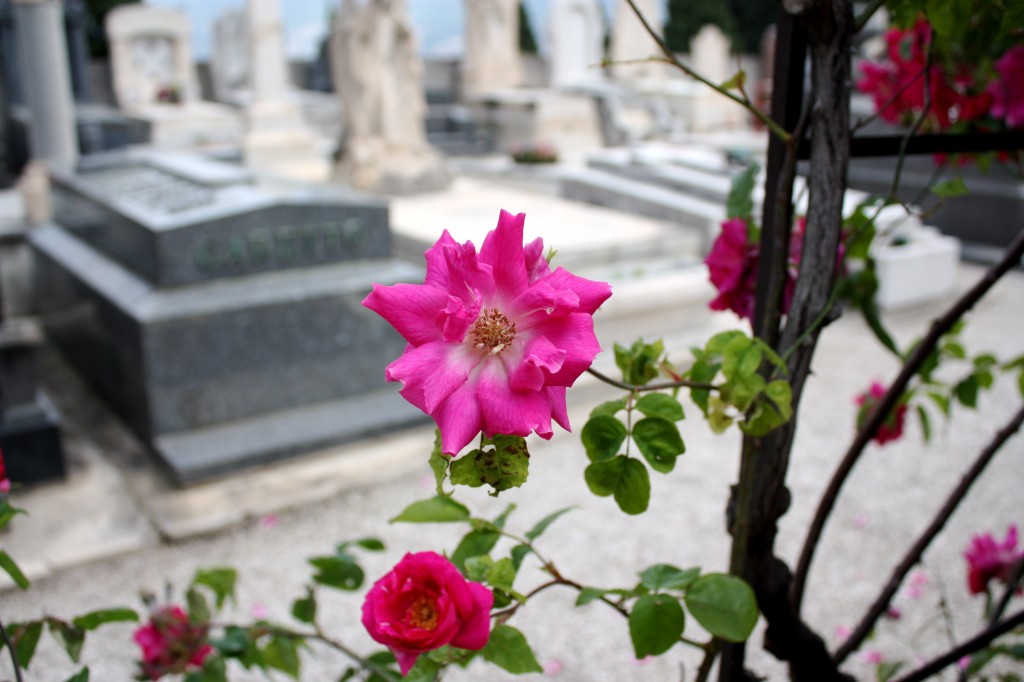 I am so excited and proud to present a guest post about the cemeteries of Nice from none other than one of my favorite France bloggers, Christine Amorose. Christine spent six months in Nice, France and blogging about life on the French Riviera at C’est Christine and tweeting @camorose. Christine’s first trip to France was at age 11, where she fell in love with pains aux chocolat, modern art and Galeries Lafayette.
Cemeteries usually aren’t at the top of any travel itinerary, particularly not one for the French Riviera. Beautiful beaches? Check. Heaps of authentic Italian food and generous portions of traditional Niçoise fare? Check. Brightly-colored shutters and winding alleyways? Check. Ancient graves and tombs? Not so much.
No doubt there is plenty to keep you busy in Nice, France and the surrounding seaside towns. Checking out les cimetières du Château de Nice, however, can give you a rare glimpse into centuries of life in Nice. The family tombs hold generations, dating back to the early 1800s. If you’re seeking a quiet refuge from the hustle and bustle of Old Nice or a break from the crowded beaches, wander through the cemetery nestled on Castle Hill. 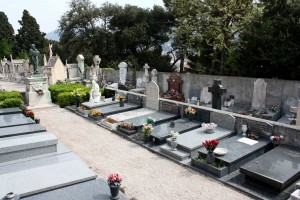 It’s worth it just for a glimpse of history that’s been lost in the tourism-driven storefronts. Graveyards can tell stories that the living can’t—and encourage you to make up your own. Reading the tombstone of a family who lost several small children in the late 1800s made me wonder about the leaps we’ve made in modern medicine. I sadly realized that many of the young men who died between 1914 and 1918 or the early 1940s were most likely victims of the World Wars. While reading tombs can be somber, it can be moving—like the tomb that held three generations of dearly loved fathers and brothers, from 1900 to 2007.
The cemetery gives you a peek into many facets of French culture, particularly religion and family. The cemetery is separated into Catholic, Protestant and Jewish sections. It’s interesting to see the differences between the large, ostentatious Catholic tombs and the simple Protestant tombs: the ideologies of both faiths are also reflected in death rituals.
All Souls Day, known as La Toussaint, is dedicated to praying for the souls of the deceased as well as cleaning and replacing flowers on graves and is still widely practiced in France. Most of the graves are extremely well cared for, with an abundance of chrysanthemums, the traditional flower of death. It’s lovely to see that the departed haven’t been abandoned, and also speaks to the generations of Niçoise that remain in Nice. 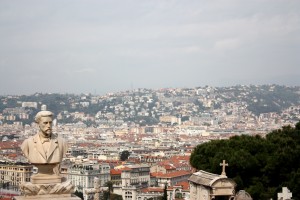 Once you’ve had your fill of the cemetery, you’re in the perfect spot to look down on the candy color hues of buildings in Old Nice and the imposing structure of the Modern Art Museum. Directly across from the cemetery is a gorgeous view of the city of Nice. Stroll through the shade to the other side of Castle Hill to check out a waterfall, beautiful gardens and mosaics, a children’s playground and an amazing panoramic view of the Mediterranean. Bring a picnic and take advantage of the sprawling grassy areas and scattered benches.
To reach the cemetery, climb up the Montée Menica Rondelly from Place Ste. Claire in Vieux Ville or wander over the from Montée du Château. The cemetery is clearly marked next to the colline du Château on a city map of Nice.