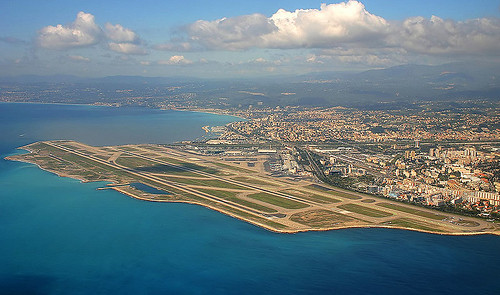 There are many reasons to book a cheap flight to Nice for your next vacation to France – and that picture above is one of them. Seriously, could you land in a more beautiful location?
Nice also provides a great base from which to explore the entire country before scampering off to other European destinations. But first, let’s go over the basics of flying into Nice from where you are now.
>>Nice not your scene? Check out the latest info on cheap flights to Paris, Lyon, Marseille and Toulouse.

The Nice Côte d’Azur Airport (NCE) is less than four miles from the city center of Nice. This is important to note, particularly if you’re arriving in Nice with one of the low-cost airlines that operate throughout Europe, like EasyJet or Ryanair. Many times, these budget carriers can offer such cheap rates because they choose an airport that’s up to an hour away from the city you’re trying to get to. That can add time and money to your vacation budget, and who wants to spend half the morning on a bus?

So, this is a good thing to keep in mind. From Nice Airport are plenty of shuttle buses, or navettes, that go not only to Nice center, but to Monaco, Aix-en-Provence, Cannes and even Marseille.
>>Gonna park it in Nice for a while? Find hotels near Promenade des Anglais in Nice – it’s the best part of the city!

Airlines That Fly to Nice

You can get to Nice from America via Delta Airlines, flying out of New York’s JFK Airport. From Canada, flights to Nice originate in Montréal-Trudeau via Air Transat. (Note that this is a seasonal flight.)
From the UK, your choices are nearly unlimited; EasyJet, Ryanair, British Airways, Flybe, Aer Lingus, Bmibaby and many others arrive in Nice from almost anywhere. Chances are, if you can get to an airport in the UK, you’ll find a flight to Nice.
>>Read more about how to get from London to the South of France.
Air France is a popular choice for flights originating elsewhere in France. Spain arrivals come via Vueling and Iberia (the latter being Spain’s major carrier, so for cheap flights to Nice check the first two). Lufthansa and Air Berlin bring visitors from Germany. And even Eastern Europe has several choices as well. There is no reason why you can’t get your butt to Nice, people!
>>Hate flying? Read tips on renting a car in France, train travel in France, bus travel in France and taking a barge in France.
If you want to travel by horse, though, you’re on your own.
If you’re feeling too fabulous for words, there is one extremely bitchy choice for arriving in Nice – a helicopter from Monaco. Heli Air Monaco is the jet-setter’s only choice for a quick jaunt from Nice to Monaco for some lunch, darlings.
*Clutches pearls*
>>Still not convinced? Check out other cheap flights to France, flights in France and airports in France.