Other than Paris, it seems like the most popular destinations in France run along its borders – Normandy, Brittany, the South of France, and the Alps. But almost smack in the middle of France is the oft-overlooked Clermont-Ferrand, nestled there in the Massif Central. Let’s take a look at this surprising city, and then promptly add it to our France vacation wish list, shall we?

As with much of France, Clermont-Ferrand has a long history – in fact, it’s one of the oldest cities in France, dating back to everyone’s favorite pillager, Julius Caesar. The First Crusade of the Middle Ages originated here. And although Montferrand historically made several attempts at extracting itself from the combined municipality, it’s been Clermont-Ferrand since 1630. It’s now a major industrial center, and a hub for traveling from Paris to other mid-France locations like Lyon and Limoges. 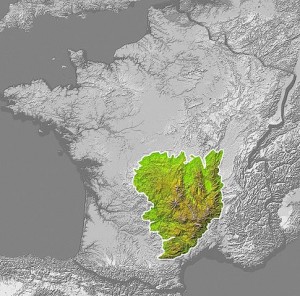 Clermont-Ferrand And The Chaîne Des Puys

The Pyrénées and the Alps get all the press, but the Chaîne des Puys is a pretty amazing mountain chain in itself. It’s the most notable geological feature of the Massif Central – and Clermont-Ferrand is the perfect base from which to experience this incredible area.

When geologist George Julius Poulett Scrope wrote about the volcanoes of the Chaîne des Puys in the early 1800s, it sparked a new age of volcanic exploration; his work remains the reference point for almost everything we know about volcanoes today. These volcanoes have also served in the building of Clermont-Ferrand – the Cathedral, the city’s fountains and many other buildings were made from the black volcanic stone of the area.

The Puy de Dôme, the highest point of the Chaîne des Puys, is visible from almost anywhere in Clermont-Ferrand, and serves as the base for the city’s television antennae towers.

The top churches to see are the massive Cathédrale Notre-Dame-de-l’Assomption, which took 700 freaking years to build, and Notre-Dame-du-Port, completed in the 12th century. The old town is, of course, a stroller’s (and shopper’s) dream. And the city hosts the International Short Film Festival and Market, which attracts some absolutely incredible and talented filmmakers.

The Puy de Dôme, of course, is the star. The views are obviously spectacular, and there is plenty to do up there as well. Paragliding is a popular activity, hikers love the GR4 paths, and history buffs follow the original Roman road that led to the Temple of Mercury (the ruins of which can be visited today). And if you’re lazy like me, there are cafes and restaurants and other places to take a load off and just stare out at the vista. (If you’re lazier than me – which I can’t imagine is possible – Parc Montjuzet on the north side of town is a good kind-of high point from which you can still get a good view.)

If it’s volcano action you want to see – well, these are dormant volcanoes. But there are plenty of volcano tours out of Clermont-Ferrand. (I don’t have any affiliation with the company at that link, but it seems like a good tour.)

There are regular trains from Paris to Clermont-Ferrand, and from there it’s a short hop to Lyon – and boom, there’s a France vacation itinerary for you!

The climate of the Massif Central means that it’s a pretty dry region, and it never gets too hot or too cold there. But make sure to dress accordingly, including something warm, if you’re hiking up the Puy de Dôme.