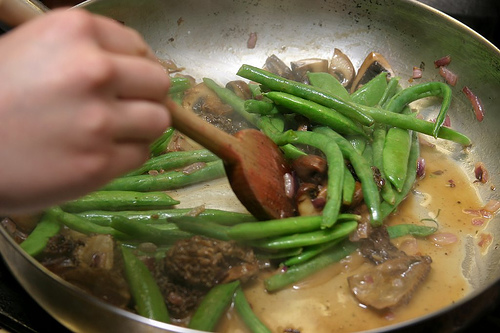 There are no less than a kabillion reasons to want to learn about cooking, food and gastronomy while on vacation in France. And for each reason, there are cooking classes in France that are holding a place for you  – RIGHT NOW. From Provence to Paris to the Perigord, from daylong meal-making to weeklong immersion, from hey-let’s-cook to holy-crap-chop-faster, you can find a French cooking class that’s perfect for your needs, desires and group size.

Rosa Jackson of Les Petits Farcis takes small groups to the famous food stalls of Vieux Nice, helps you pick out the ingredients, then it’s off to her house to prepare a four-course meal, which you all sit down and eat. She notes that her home is air-conditioned, which given Riviera summers may be the best selling point! She comes highly recommended by big names like Rick Steves. $195 per person includes everything.

La Combe has a marvelous Guest Chef series throughout 2011. The seven-night, eight-day Guest Chef program costs from €3,200 and features a truffle hunt, market tours, foie gras preparation, cooking classes and more. Check their 2011 schedule to see if it fits with your vacation plans!

Teen Cooks takes groups of kids aged 15-18 off your hands for a week, and teaches them how to cook (as well as takes them on tours of the French countryside, between historic St Jean d’Angély and Niort) – all for the low low price of £475. They also have a “Student Survival Cookery Course” for the same price, for students 18+, which also includes budgeting, kitchen hygiene and other grown-up basics.

OMG, this sounds so delightful: three days at the Institute, tours of Lyon’s Halles, lots of cocktail receptions and dinners. Vineyards and Kitchens of France also has lots of other fun weeklong vacations in France like Wining and Dining in Champagne and Alsace, Food and Wine from Provence to the Cote d’Azur and The Best of Burgundy. It makes you want to just clear your schedule and go, doesn’t it?

Five-Day Cooking Class in the Dordogne

The aptly named Cook in France lets you do just that – and they offer pretty much any type of vacation/cooking course combination under the sun. Their offerings include Christmas cooking, summer cooking, winter cooking, golf/cooking combos painting/cooking combos, corporate retreats and more. They also have one- to three-day courses. Seriously, if you can’t find a French cooking class you like from their selection, stay home.

I normally wouldn’t include this here, but David Lebovitz deserves a mention whenever he’s available to do any kind of tour whatsoever. If nothing else, it avoids the awkwardness of stalking him as he goes about his day. Included is 6 nights at a 4-star left bank hotel in Paris, most meals with wine, in-city transport, guided tastings, and all breakfasts. Space limited to 10 guests. BOOK NOW YOU GUYS.

Hub-UK offers culinary and wine vacations in a chateau just outside of Bordeaux. They seem pretty well-rounded, with cooking, gastronomy, wine, tours and free time as well for excursions or a round of golf. Their website features happy people drinking wine in a gorgeous setting, so how bad could it be?

Cooking With Friends in France is a culinary immersion program that features cooking classes; market, cheese and butcher shop tours; classes with professional chefs; lunches at a Michelin two-starred restaurant; and the once in a lifetime opportunity to cook in Julia Child’s former Provence kitchen. Where do I sign up! They also feature a winter truffle class.
Speak of truffles, there is the awesomely-named “Black Truffle Cooking Extravaganza with Patricia Wells.” Per her description, the course begins with dinner on Monday evening and ends after lunch on Friday. The fee is $5,500 and includes Monday ’s truffle dinner, truffle lunches and dinners on Tuesday and Wednesday, Thursday’s lunch, and a farewell lunch on Friday. Thursday evening is free for students to explore the region on their own. The fee does not include lodging.
And finally, check out this comprehensive list of cooking classes in France from the France Tourism Office, which categorizes the classes by region.