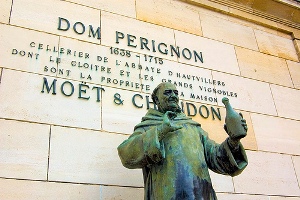 For the majority of Champagne lovers, Dom Pérignon represents the best French wine regions offer. Dom Pérignon, the Benedictine monk, has been credited with inventing champagne as we know it today, but there is more to this story.

What kind of a name is Dom Pérignon?

Pierre Pérignon was born to a clerk in about 1638 in the Champagne region of France. When he was 19, he joined the Benedictine monks, thus earning him the title “Dom,” and first served at the Abbey of Saint-Vannes in the town of Verdun. He transferred to the Abbey of Hautvilliers near the town of Épernay in 1668, where he served as a cellar master until he died in 1715.

How is Champagne made?

Wine has been produced in France before Dom Pérignon. In the era of in-bottle fermentation – which gives the champagne its sparkle – the technique gave a lot of headaches to winemakers. When the weather was cold during autumn it prevented the sugars from fermenting; but during spring they started to ferment again, which meant the bottles were literally time bombs. The dormant yeast would start to produce carbon dioxide that pushed the cork out of the bottle, or worse, made the bottle itself explode. And that’s not all: it caused chain reactions and the bottles nearby would explode as well. That was both hazardous for the employees and for the year’s champagne production.

In 1718, Canon Godinot published a set of Champagne making rules, which are said to be established by Dom Pérignon. He was not fond of white grapes as they tend to enter re-fermentation; thus he said that fine wine should be made only from Pinot Nior. Dom Pérignon tried to avoid the re-fermentation process with this idea.
Another rule is to prune the vines aggressively so that they grow no higher than 3 ft (90 cm) tall and produce a smaller crop. Harvest should be done early in the morning (when the conditions are cool and damp). Rotten and large grapes are discarded. Dom Pérignon was also an advocate of organic winemaking, without adding any foreign substances. 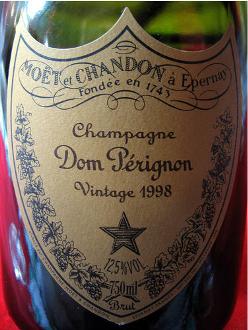 The Dom Pérignon Champagne we know and drink today

The first Dom Pérignon Champagne was produced in 1936 by Moët & Chandon, which purchased the Abbey of Hautville. The Champagne only exists in two styles: the Brut and the Brut Rosé, and in two sizes: 750 ml and 1.5 L.
By now you are probably curious how much a bottle of Dom Pérignon Champagne would cost you. As with any wine, the older it is, the more it costs. If you want to buy Champagne bottled in 1993, you can pay as much as €600 for a 750 ml bottle. A bottle dating from 1999 would cost only €100.

Can you take tours of Moët & Chandon and Dom Pérignon?

The Moët & Chandon winery is an understandably popular tourist attraction. The day tour, which leaves from Paris, includes visiting the cellar, drinking a glass of Champagne, and eating lunch in a charming village nearby. Also, you can purchase Dom Pérignon Champagne directly from where it’s produced. The day tour costs €136 per person.
Alternatively, you can visit just the cellar. A Visite Traditionnelle (traditional tour) costs €11 per person and includes one Champagne tasting. The Visite Imperiale includes two different champagne tastings, and costs €20 per person. The exclusive Visite Millesime, which includes the tasting of two vintage Champagnes, costs about €25 per person.

The phrase, ”Come quickly, I am drinking the stars” has been attributed to Dom Pérignon as he drank champagne for the first time.

Any other information about wine and Champagne?

Obviously, you haven’t met me:

Thirsty? Check out this awesome video of the current cellar master of Dom Pérignon, which shows you the storied cellars and explains the history and process (but without being boring):