For some, the idea of hitting the highways in a foreign country can be rather unsettling. However, if you choose to rent a car in France, a car can be a great way to see the beautiful French countryside. While I am always an advocate of traveling by train in France (besides the fact that I don’t drive, the TGV is by far the fastest way to get around the country), a car allows you more freedom and the ability to meander through the French countryside, stopping at villages and small towns that you may miss otherwise. Especially in the less populated areas of the country, a car also allows a traveler to set his or her own agenda, say, if you wanted to spend an extra day staring at sunflowers in Provence. 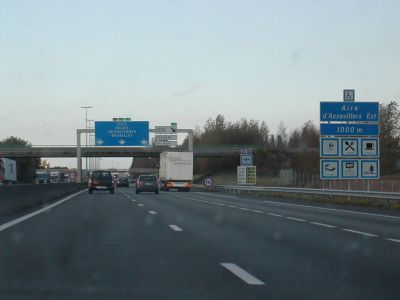 France is laced with a well connected network of high-speed highways called Autoroutes, which are mostly toll roads (routes à péage). Unlike major highway systems in other countries, France’s Autoroutes do not have a systematic numbering system, but are named based on region. For example, Autoroutes A-1 through A-16 radiate from Paris. While these Autoroutes make for easy travel around the country, you are usually better off taking a train when traveling only between major cities. Traffic in and around the large cities (like Marseille, Paris and Lyon) can be heavy, chaotic and cause long delays.

In addition, while the Autoroute system is a network of more than 7000 km/4200 miles of roads, because most highways work on the hub system (with Paris at the center of the hub) traveling from, say, Southeastern France to Southwestern France can be tricky. 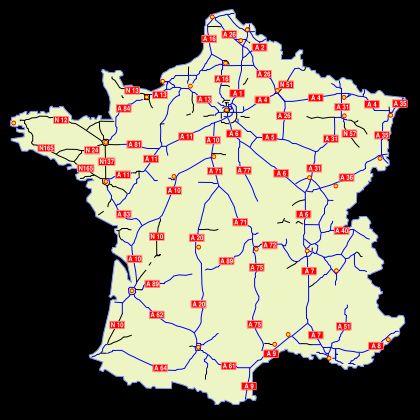 Much like the interstate system in the United States, France’s Autoroutes also have rest stops along the way called Aires. Aires are located roughly every 20 km and have everything from gas stations to restaurants, picnic grounds and restrooms.

Don’t be surprised if you find Turkish toilets (i.e., a hole in the ground) at some of these Aires. While they are clean, those who are uncomfortable with this type of toilet should use the handicapped restrooms, which always have regular toilets.

Gas is much more expensive in Europe than in the United States. However, buying gas in France is pretty much exactly like it is in the U.S., except you pay by the liter in in euros rather than by the gallon and with dollars (obviously).

While it easy to find gas stations all along the Autoroutes in France, the cheapest place to buy gas is usually at supermarkets off the highway and in town. If you plan your French road trip well, you can get gas during a lunch break in town or before you head out in the morning.

At the pump you can buy unleaded (sans plomb) in either 95 or 98 octane, super unleaded (super) or diesel (gazole). Some stations will also sell what is called fuel in French, normally at a separate pump. Do not buy it; it is diesel that is only sold to farmers. You can be fined, if it is found in your tank. This diesel is colored red, unlike regular diesel.

If possible, rent a car that runs on diesel, as it is cheaper than unleaded. Also the mileage is better. While those coming from the U.S. may think that diesel is only for huge trucks, this is not the case in France. Because diesel is cheaper in France, there are many companies (like Peugeot) that make mid-sized sedans in diesel models. This is probably the way to go.

Make sure to ask your car rental agent what kind of gas the car takes, and even have him or her write it down for you. The last thing you want to do is be stranded because you put the wrong gas in the car (although there are adapters on cars that prevent you from putting in the wrong juice!).

As stated above, most of France’s Autoroutes are toll roads. If a road charges a toll you will see it marked “à péage.” These tolls areusually a flat rate paid based on distance; you take a ticket at the station where you enter the Autoroute. When you exit, you give the ticket to the attendant at the exit station, and your toll will be determined. You can pay with either cash or credit card. Don’t lose your ticket, or you will pay the maximum toll.

If you are vacationing in France (as opposed to living there) and you’re over 18, your domestic driver’s license suffices. However, if you are one of those people that likes to err on the side of caution in these situations you can obtain an International Drivers Permit, which is a means by which police in a foreign country can know — in terms of translations in nearly a dozen different languages — that your domestic driver’s license is indeed recognized as being valid by the proper authorities in your country.
While it is not really necessary to obtain a IDP before renting a car in France, you can get an IDP at the local office of your auto club (AAA, CAA, etc.). They cost about $10; just make sure you bring with you your driver’s license, cash and two passport-sized photos for the card.

The rules for driving in France will not vary largely from many other places in the world, but it is important to brush up on a few things that may be different when driving in France. Rule 1, for the Brits: The French drive on the right side of the road.

Thanks to the crazy world of Twitter (you can follow me @WhyGoFrance), I had a few suggestions and tips come in about things to keep in mind when driving in France. Brittany gite owner, @la_vache said: “don’t forget that the French don’t use indicators, obey traffic lights or give priority to other cars already on a roundabout.” And @thisfrenchlife pointed out this helpful guide from the French government, which includes speed limits – download it now.

I also asked a dear friend who’s fond of road trips for some driving tips while in France, and here’s what he had to say:

If you want to brush up on more French driving rules and regulations, you can check out this guide and make sure you’re ready to hit the road for your vacation in France.

While taking the train in France is almost always going to be faster than driving (thanks to the high speed TGV’s that travel at speeds of more than 200 mph), here is the rundown on estimated driving times in France.