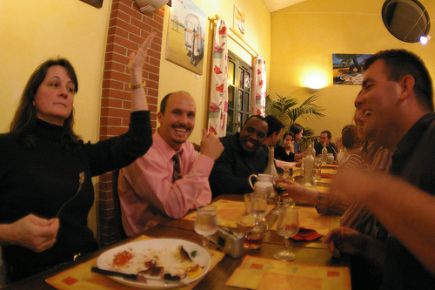 Food and eating in France are such an integral part of French culture and daily life, it is essential to understand a little bit about the French meal before you pack your bags and head to the land of flaky pastries, hundreds of cheeses, crispy baguettes, pate and so many other gastronomic delights (the list could go on forever).

Not only do the French care a whole lot about what they put in their mouths, the entire ceremony surrounding the meal and eating are equally important. It’s not just about what you are eating, but how you eat it. Especially for Americans who are used to a culture of eating and drinking everything on the go, the concept of a slow and very deliberate meal is a bit of a foreign concept. But France is the country where 2 hour lunches are standard, where the idea of a to-go coffee cup is still ludicrous and where it is unacceptable to rush a meal under almost any circumstance. Once, when I was running late for class and asked for the check before I was finished eating I got lectured on the importance of not rushing my meal. And then he brought the check after I had not only finished eating, but my plate had been cleared and he had asked me if I wanted a cafe. Guess what? I was late to class.

My grandmother’s favorite expression is “la table n’est pas loué,” which means “the table is not rented” (this has been uttered at an innumerable number of meals throughout my childhood and almost any time we sit down at the dinner table). It’s her reminder to us that there is no rushing the meal. And she means it. She comes from a country where the actual eating portion of a dinner party can take 5-6 hours. The French take their meals seriously.

Here is guide on everything you need to know for how to survive a French meal (it’s not that tough. Trust me).

The apero as it has been nicknamed in France, is an important and lovely tradition in France. The aperitif hour usually starts around 6 or about an hour before a meal. Starting around 6, you’ll see sidewalk cafes and bar terraces fill with patrons who chat and sip on their aperitifs.

When I was living in France, I would return home from class each day around 7 pm, at which point my great-aunt who Hugette whom I loved with would have an aperitif waiting for me while dinner finished cooking. 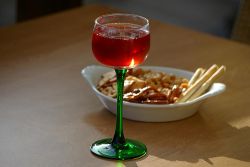 Kir—This is my personal favorite aperitif. It is made from a dry white wine and a splash of cassis (a black current flavored liqueur. A Kir Royale is the same thing made with champagne.

Pastsis—This is a concentrated aniseed flavored liqueur mixed with water. If you could drink black liquorice, it would probably taste like this. Although amberish in color in the bottle, it turns to a cloudy color when mixed with water.

Pinaud—This is definitely not a drink you see frequently in the U.S. It is made from grape juice fortified with cognac).

Beer—While France is known as a country of wine drinkers, you will see people sipping beers during the aperitif hour. A Demi is a fourth liter and the usual size in most places. 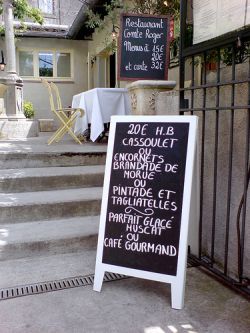 You will often see these words written on boards outside of French restaurants. It means “price fixed menu” and it usually will specify what is included in the price. The entrée-plat-desert is a pretty standard formula, though some price-fixed menu will be paired down to simply a entrée-plat or plat-dessert. You will be usually given a list of selections for each course. While fixed-menu in some comes with the connotation of high prices, this is not the case in France. Often, these fixed menus are a great deal and some even come with wine, making it a good way to go.

A menu degustation is like tasting menu and features many courses of smaller plates and runs the gamut of regional cuisine and the chef’s specialties. You will usually see these menu at more upscale restaurants.

Elaborate French meals may include the following courses: 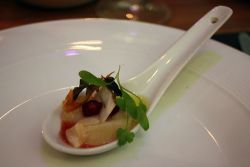 Amuse in French means to entertain and bouche means mouth, so you can imagine that these little courses are designed to entertain your mouth. They are usually a single bite and a surprise from the chef. It can be anything from chilled soup to 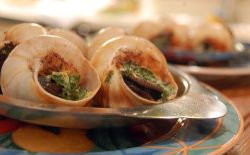 For those of us who have taken any French classes, we know that faux amis (false friends) are words that are the same in English and French but have different meanings in the two languages. The word entrée is one of these faux amis. An important thing to understand before you sit down at any restaurant is that an entrée in France is not a main course, but a starter (as you would guess from the name, which translates as “entrance”).

Entrees are appetizers that will often include items like soup, chacuterie (cured meats like salami and prosciutto), pate or foie gras, oysters, escargot and a variety of other dishes. 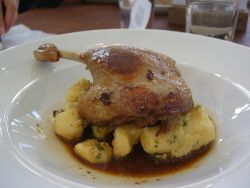 The plat is the main course of the meal, and usually consists of a meat or fish dish (there aren’t many French vegetarians, and you will probably be met with some pretty interesting looks and confusion if you tell your server or host you don’t eat meat). This course is usually also accompanied by a seasonal or region vegetable and the plat is often followed by a green, leafy salad (une salade verte). 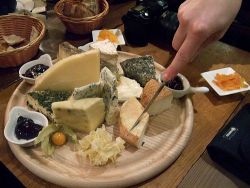 While many Americans are used to eating their cheese before a meal, the French usually follow a large meal with a cheese course just before desert. Keep in mind that you will likely have a large board of delicious cheeses to sample while you are eating the previous courses (because it would be such a shame to be too full for cheese). If you have been lucky enough to have been invited into a French home for a meal, the host will often present guests with a board with at least a few different cheese options.

At restaurants, you’ll either have a waiter rattle off the names of few different cheese or you will be asked to select from a pungent group of cheese he brings to the table. Just point to which ones you’d like to try. And absolutely don’t think about skipping this part of the meal. In fact, any visitor to France should be obligated to try as many cheeses as they can.

>>Did you know that there are Apellations for cheese just like there is for French Wine? 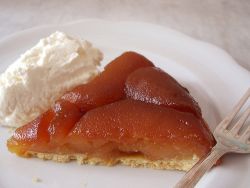 You will usually see a general assortment of different deserts on the menus in French restaurants. Tartes are a staple (open-faced, light crusted pies). Though you’ll see tartes filled with a variety of fruits (like apricot or pear), Tarte Tatin is among the more popular tartes (moist, upside-down kind of apple pie).

One of my childhood favorites and my grandmother’s speciality, you will also see crème caramel and creme brulle on many menus. Most restaurants will also have a chocolate cake on the menu, which always seem to have a fudgey, gooey center. 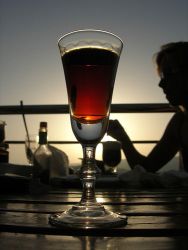 Most meals in France are finished off with a digestif (an afrter dinner drink). In contrast to apéritifs (which are drunk before a meal), digestifs usually contain more alcohol.

Digestifs are usually drunk straight (neat) and are most often spirits such as bitters, brandy, grappa, or whiskey. Some wines (usually fortified wines) are served as digestifs — for example, sherry, port, and madeira.

Coffee will also sometimes be drunk following a meal. Do not expect to have any cream with you coffee, however, as the French tend to avoid any cream in their coffee after noon. 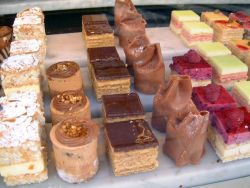 Petit Four translates literally as “little oven,” but these are actually little cakes generally eaten at the end of a meal. These little cakes were traditionally made as brick, coal fired ovens. Because coal burned hotter than wood and was more expensive, these little cakes were made as to not waste the heat generated as the oven cooled (when it was not hot enough to bake larger cakes).