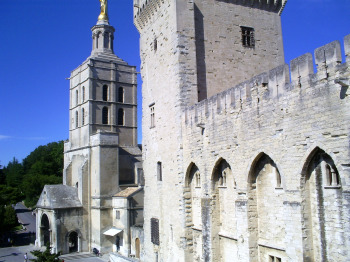 Adjacent to Italian World Heritage site Le Cinque Terre, and blessed by mild Mediterranean temperatures, the southern French region of Provence is one of the most glamorous holiday destinations among European travelers.
Under the administration of Provence-Alpes-Côte d’Azur, the region’s name dates back to Roman times when it was conquered and made it a Roman province (Provincia). Historic sites and quirky traditions are around every corner, and the landscapes of dramatic cliffs, wiggly waterways and wild mountains are overwhelming.
Authentic provençal life and traditions are best experienced in the region’s quirky little villages scattered all throughout its territory. Perched hamlets, ruined castles and deserted country lanes form the mysterious soul of the provençal area of Vaucluse, and many colorful local markets adds to liveliness.
The closest international airport is Marseille, but the best town to stay and from which to organize excursions is Avignon, being almost equidistant from all Vaucluse villages. Known as the City of the Popes due to the relocation of the Holy See from the Vatican between 1309 and 1377, Avignon is today a vibrant cultural town in the heart of one of the most seductive regions of France.
Being based in Avignon also gives the opportunity to visit its main heritage sites such as the Papal Palace (Palais des Papes) and the cathedral Notre Dame des Doms, and wander along its medieval streets and the famous Avignon Bridge, that offers a stunning view of the Rhône River.
Although Provence is a highly touristic area, buses are not as frequent as one might think and the easiest way to get around is by renting a car. For bus routes and fares, the best website to check is compiled by the Department of Vaucluse.
Cavaillon 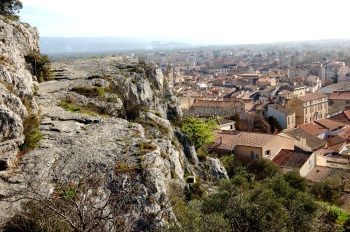 Nestled in the valley between the Luberon mount and the hill of Saint Jacques, Cavaillon is a quiet picturesque town in the heart of sunny Provence, in southern France. Lively both day and night, Cavaillon has something for everybody. Wandering the town’s streets travelers can slowly discover its history, traditions, colors and tastes, while climbing the hill of Saint Jacques the unfolding panorama will comprise the whole Cavaillon, the river Coulon and the Luberon mount opposite.
Along the town’s main roads, such as Cours Bournissac, Rue de la République and Cours Léon Gambetta, are lined up tantalizing little shops displaying colorful local  products such as lavender honey and typical cakes and breads, and fruits marmalade. On the cultural side, an ancient Synagogue and the old Cathedral lead visitors through Cavaillon’s ancient communities and lost mores.
Cavaillon is about forty minutes car drive from Avignon and an hour by bus. There are coaches departing from Avignon central station Gare Routière to Cavaillon station about every two hours, and the latest departure from Cavaillon back to Avignon is around 6,30pm. Ticket prices range from 1,50€ to 3€.
Gordes
Gordes strikes you before you actually arrive to town. Listed among the most beautiful villages in France, it offers breathtaking views from both outside and inside its walls. The little country lane that leads towards this perched village is full of tourists who stop in the middle of the road to take their best shots of the awe-inspiring castle and cathedral that command the view.
More than just a village, Gordes looks like a sculpture that comes naturally out of a huge rock, almost a natural wonder, rather than a man-made cluster of buildings. A stroll up and down its narrow cobbled lanes gives a unique perspective on medieval French architecture, to fully enjoy by visiting colorful local markets and traditional festivals.
There are no buses departing from Avignon to Gordes, and due to its position perched on a cliff and the possibility of taking great photos, the best option is to rent a car. Avignon is about forty-five minutes drive from Gordes.
Village des Bories
Part of Gordes’ municipality, the Village des Bories strongly reminds of a ghost town. The very origins of the bories, cone-shaped stone huts, date back to the Bronze Age, while for the village itself historians are debating over its inception, to be situated somewhere between the 7th and the 15th century.
Although no longer inhabited, it is certain that finds such as working tools and pottery, date back to the 18th century, and the most recent architectural changes to as little as the 19th century. It completes the fascinating journey through French dry stone history a short exhibition of photos taken all over the world showing that similar stone dwellings and villages can be found in many countries, from the Italian regions of Sardinia and Puglia, to California, to Turkey.
Lacoste
Epitome of inaccessibility, this perched village in the heart of Provence was once the beloved residence of the infamous Marquis De Sade, where he lived his most scandalous and libertine days, and wrote his blasphemous books against the Catholic Church, provoking the fury of the clergy. After several short imprisonments, he was exiled in his Lacoste castle in 1768.
Restored by the French fashion designer Pierre Cardin, the castle is not open to visitors, who can only admire its ruined external facade commanding the view on the countryside. The austere building looms over the village that lies in layers on the hill slopes. Modest signs point towards the Atélier de Création and the Savannah College of Art and Design, reason why it’s not unusual meeting English speaking students strolling along Lacoste cobbled alleys.
There are no buses from Avignon to Lacoste, and with the car it will take around half an hour to arrive.
L’Isle sur la Sorgue
Commonly called l’Isle by the region’s inhabitants, this village is spread out along the banks of the river Sorgue, from which it derives its name “the island on the Sorgue”. Very lively summer and winter alike, the town organizes every Thursday and Sunday a thriving show of delicacies coming from local farms. Boasting huge sectors devoted to all possible spices, jams, cheeses and flowers, l’Isle sur la Sorgue has the power to make even grocery shopping a pleasant activity.
While along the river it’s a cluster of cafés, pubs, ice cream shops and restaurants, moving a little towards the city center it’s possible to discover how the ancient town has been greatly preserved on the top of the buildings: if the bottom floors have been used as shops or public places, the council has decided to keep the town’s traditional look on the top floors, combining picturesque leisure time with genuinely old-fashioned style.
L’Isle is about twenty-five minutes drive from Avignon, and about forty minutes by coach. The buses from Avignon are about every two hours, being the latest way back around 6pm. Ticket prices range from 1,50€ to 3€.
Roussillon
Also known as the “red village”, Roussillon is an adored holiday destination for in-the-know European travelers. The blazing red color of its cliffs and the ochre hues of its quarries give the town a warm look under the blue Provencal sky. Surrounded by the other picturesque villages that contribute to evoke the charm of this French region, Roussillon has bedazzled many artists and is a thriving resource of art galleries and traditional craftspeople. A stroll around its narrow alleys is the perfect way to capture the essence of this little town, and an outing on its red canyon makes it for an otherworldly experience in southern France.
There are no buses from Avignon to Roussillon, and changing in Cavaillon could mean waste half a day between waiting and traveling. A car drive is best option and it will take less than an hour.
Châteauneuf-du-Pape 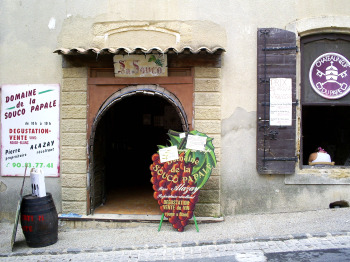 Maintaining the regional style of narrow cobbled lanes, Châteauneuf-du-Pape is renowned for the excellence of its wines. Red, white, rosé, visitors can enjoy a stroll about this medieval picturesque town by dawdling along its streets dotted with tiny caves. Friendly and cosy, caves are the soul and the claim to fame of Châteauneuf-du-Pape, where the wine tradition was brought in by the popes who had relocated the papacy in Avignon in 1309. <
The village, previously called Châteauneuf Calcernier, derives its current name by the castle built by pope John XXII in the 14th century, but officially acquired in 1893 in honor of the widespread circulation of the wines commonly known as  Châteaneuf-du-Pape. It completes the excursion a stunning view of the countryside that surrounds the village.
From Avignon to Châteauneuf-du-Pape there is only one bus a day. A car drive takes around fifteen minutes.
Fontaine de Vaucluse 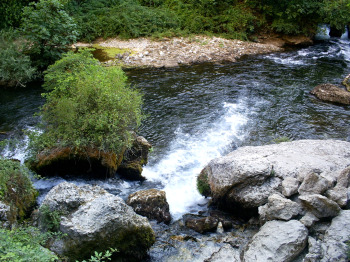 In line with the trend of neighboring villages, also the town of Fontaine de Vaucluse proudly boasts having been a source of inspiration for many writers such as Italian poet Francesco Petrarca who wrote masterpieces such as Chiare, fresche e dolci acque, to celebrate her beloved Laura from the source of river Sorgue. Nestled in the middle of a lush vegetation and with the river stretched out along its main road, Fontaine has been built around this source of water gushing up out of the ground and making the surroundings glow with iridescent hues.
Like many of other Provencal towns, also Fontaine houses beautifully preserved and very interesting museums, such as the one about traditional paper-making located where was the paper mill, once the main economic resource, and the Musée Appel de la Liberté about history and daily life in France and Provence during WWII.
Fontaine de Vaucluse is about thirty minutes drive from Avignon, and forty-five minutes by coach. The buses from Avignon are about every two hours, being the latest way back around 5,45pm. Ticket prices range from 1,50€ to 3€.
Angela Corrias is an Italian freelance journalist. She specializes in travel writing with the aim to combine her passion for travelling with a socially aware writing. She regularly updates her travel blog Travel Calling.
All photos by the author and may not be used without permission