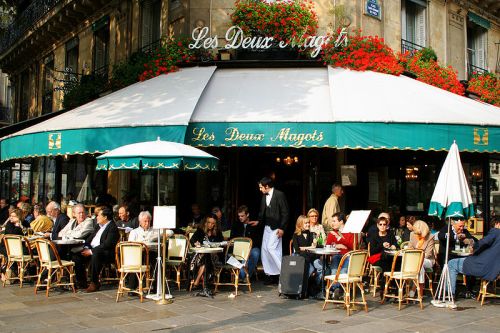 When it comes to style, art, culture, food and drink, the French are the undisputed kings and Paris is their crown jewel. A city bursting at the seams with fabulous sidewalk cafés, bars and restaurants  renowned for their famous clientele – from ex-pat writers like Hemingway to contemporary authors, artists and celebrities – there are plenty of haunts in Paris where you can sit at a table and sip your cocktail in the same spot Camus once did, or drink absinthe where Hemingway regularly got plastered.

While there are many equally great and lesser known cafés, some of the most famous Parisian cafés and bars are sightseeing destinations in themselves. From the birthplace of the Bloody Mary to the hangout of Picasso and Hemingway, you can sit and soak up the artistic vibes from generations past and hope some of that literary genius still hangs in the air. 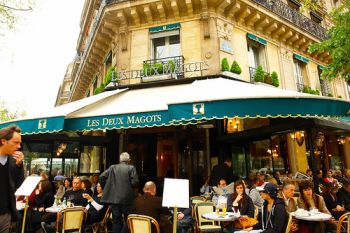 A Paris institution, Les Deux Magots has long had the reputation of being the place for a rendezvous among the literary and intellectual elite. It has hosted several famous patrons, among them Sartre and Simone de Beauvoir as well as Hemingway, Camus, and Picasso. The café has been featured in many films and like Café de Flore, Les Deux Magots also has had an annual literary prize for French novels every year since 1933.

My first time at Les Deux Magots, however, had little to do with existentialist thinkers and a lot more with my fascination of sitting in the bar that was the setting of so many conversations from my French language text book in school! 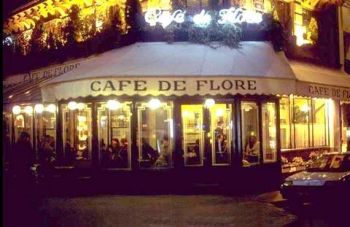 While there are dozens of bars that claim to have hosted famous scholarly, literary and artistic clientele, there are a few places in Paris that hold a special place in café culture and literary legacy in the City of Lights. Café de Flore is one of these places. Like its main rival  Les Deux Magots (who knew bars could have rivalries?), Café de Flore has long been celebrated for its intellectual clientele and gives out its own annual literary prize, called the Prix de Flore. 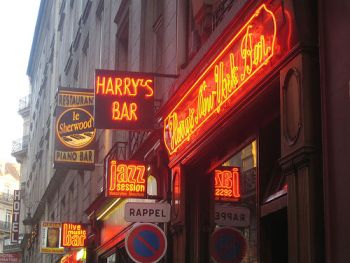 This Paris institution was opened in 1911 as The New York Bar; it later got its name from Harry McElhone, a Scotsman who was hired to run the bar. In a time when Paris was flooded with more and more Americans from the artistic and literary communities, Harry helped popularize the bar and make it a spot where ex-pats could feel at home.

Harry’s bar is not only the birthplace of the Bloody Mary, but has also hosted many famous American ex-pats and international celebrities like Sinclair Lewis, Hemingway, Bogart, Gershwin and more. 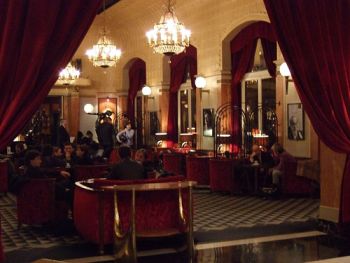 Hemingway seemed to leave an indelible mark on the many establishments in Paris, and the Bar Hemingway pays tribute to the hard-drinking author. Hemingway famously ordered a drink at the Ritz Bar during the liberation of Paris while gunfire from retreating Nazi soldiers could still be heard outside. Apparently, not even war or the threat of speeding bullets could turn stop Hemingway from getting to his booze.

Today you’ll find grossly overpriced cocktails at this bar (about €15 a pop), but you’ll also be surrounded by history and memorabilia. You’ll see homages to writers like Proust as well as rows of newspapers and a cozy, wooden interior. 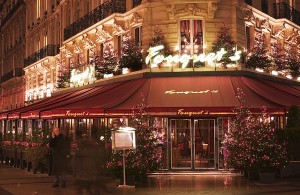 Aa Paris institution on the Champs Elysees since 1899, Le Fouquet’s is known as the place to see-and-be-seen and has boasted patrons like Chaplin, Chevalier, Churchill, FDR and Jackie O.

Not only will you be surrounded by the history of the famous guests who have sat and sipped here before; the sidewalk seating is perfect for spending a few hours nursing a café or a cocktail and watching people stroll by on the Champs Elysees. 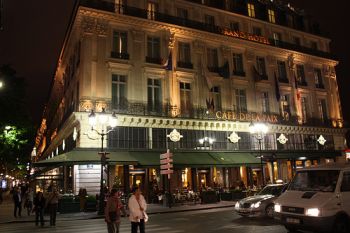 Situated in the 9th arrondissement, Café de la Paix was designed by Charles Garnier, the architect who designed the nearby iconic Paris Opera house. A popular meeting spot for after-opera dinner and drinks, it is said that if you sit at Café de la Paix long enough you are bound to run into someone you know.

Café de la Paix opened in 1862 and has attracted many famous clients since its opening, including Émile Zola and Guy de Maupassant. On opera nights the Café de la Paix will fill with the Who’s-Who of Paris; while certainly not a budget place to eat or drink, it is guaranteed to provide you with prime Parisian people watching. 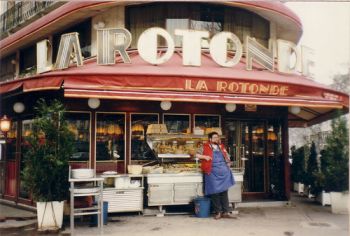 Yet another bar once patronized by Ernest Hemingway, this famous café was immortalized by the author in The Sun Also Rises when he wrote, “No matter what cafe in Montparnasse you ask a taxi driver to bring you to from the right bank of the river, they always take you to the Rotonde.” Le Rotonde is known as one of the many rallying sites for the Lost Generation, surrealists and existentialists living in Paris after WWI.

Le Rotonde and its Art Deco interior has seen patrons like F. Scott Fitzgerald, Matisse, T.S. Eliot, Sartre, Gertrude Stein and Alice B. Toklas and others, who sought out the Montparnasse bar during a time when the neighborhood was known for its Bohemian vibe. 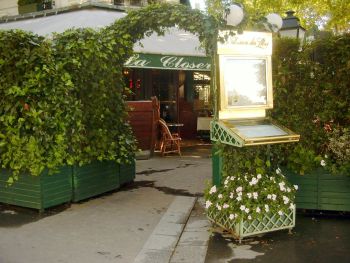 Another famous Montparnasse bar, La Closerie has been an important Paris institution since its opening in 1847, serving as a magnet for the social and culinary avant garde. The famous people who have sat in the “Lilac Garden” include Stein and Toklas, Ingres, Henry James, Chateaubriand, Picasso, Hemingway, Apollinaire, Lenin and Trotsky (at the chessboard), and Whistler.

While today you will mostly find tourists rather than literary giants, there is definitely something to be said about sipping a café or glass of wine where it is rumored Hemingway once penned much of The Sun Also Rises.