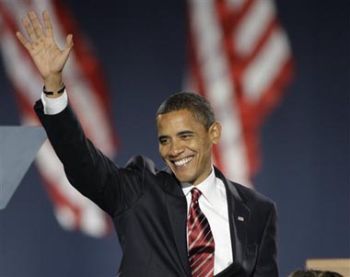 France anxiously looked with the rest of the world to the United States yesterday as the country prepared to finally decide the new President. As one of the world’s biggest supporters of the President-elect, more than 80% of the French people were in support of Obama (only Obama’s father’s country of origin Kenya had a higher percentage of supporters). This being the case, it’s no wonder that the French vociferously celebrated Obama’s election. France’s Le Monde’s front page had the headline “L’Amerique choisit Barack Obama” (America chooses Obama) with an accompanying full page photo of the new President with a caption reading “Mister President.” In the early morning hours in Paris as the election was called in favor of Obama, French took to the streets to celebrate. French President Nicholas Sarkozy wrote a letter congratulating the Obama on the election and many of the country’s main media sources are talking of French opinion towards the United States already shifting with the new, much more popular President to take office in January. It seems just knowing Obama will be president has already made the French like us more.

Harry’s Bar in Paris, which is a popular tourist destination, ex-pat hangout and is often credited as the birthplace of the bloody mary, has been conducting informal opinion polls of its patrons regarding the U.S. presidential election since 1924. The polls have only been wrong twice since it started the tradition, once in 1976 with Jimmy Carter’s election and recently in 2004 with the re-election of George W. Bush. This year the popular bar’s poll once again was spot on in predicting the outcome of the presidential election, favoring Obama in the race 248 votes to McCain’s 154.

Curious what the French media has to say about the new American president? Here are some clips from France’s major media sources reacting to the U.S. election:

“In this election, a French bias about Americans is swept away. Every four years, we complain about the poor voter turnout in the USA — which is a reality. But this year, given the election’s historical significance and thanks to the technological advances of the Internet, we saw an exemplary mobilization of American voters. There were impressive lines at the voting booths, and voters showed a higher-than-usual level of interest.

“We also need to change our preconceptions about American prejudice. For the first time, an African-American and a woman were candidates for the highest office in the land. It seems like America could teach us a thing or two about democracy.”

“Domestically, Barack Obama is defending a program that is better suited to the American economic crisis: reviving the role of regulation in the US; tax policies to smooth out increasingly wide socio-economic divides; planning a health-care system appropriate to the country’s wealth. (…)

“In foreign policy, a Democratic president won’t work miracles. But through his personality, Barack Hussein Obama will be in harmony with a world where the economic and political center is no longer the West. (…) Opposite him was John McCain, a longtime centrist who slipped farther and farther to the right. He thought he could only win by dividing America.”

>>Want to read more about how the international community is reacting to the U.S. Presidential election?