Ella Fitzgerald may have rhapsodized about April in Paris, but all of France in April is a thing to behold – the entire country awakes and stretches sleepily from its winter slumber, the air is crisp and fresh, blossoms start peeking out from their branches, and spring menus feature the fresh delicacies you’ve been missing over the colder months.
April in France begins with Poisson d’Avril, or April Fools’ Day – yep, there’s no escaping it. And in 2011, the Easter holiday falls in April as well, at the end of the month. It’s a wonderful, festive time for the French, who take full advantage of the nice weather and take short vacations to the great outdoors. Follow their lead, and your own holiday will feel like a month of Sundays.
>> Is Easter earlier this year? Check out France in March

Head to the South of France

While it can remain a bit cooler in the north, if you’re looking to get a jump on warmer weather then the South of France is the place to be. It’s not unusual for the French to bust out the bathing suits and catch the sun along the beaches of the Côte d’Azur, or enjoy springtime hiking trails in Provence and Languedoc.
The water is still a bit chilly for swimming, but the Mediterranean sun is blissfully warm. And because it is not yet high season, you can still find cheap flights to France and great hotel deals, especially in smaller beach towns that have been closed all winter.
>> Read more secrets about the South of France, and about cheap flights to Nice. 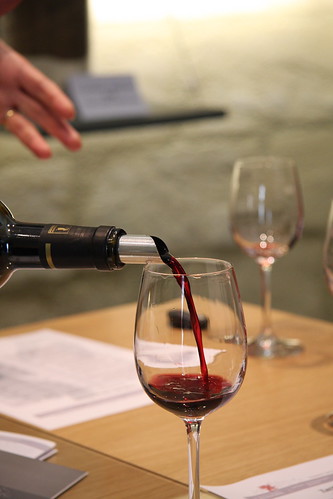 If you want to rent a car in France, you can hit the road in search of your favorite grapes. Get a convertible and cruise down the tree-lined roads of the Aquitane region, home to Bordeaux and some of the country’s most outstanding wine labels. (Note: April weather is ideal for a convertible. Just saying.)
This southwestern corner of France is bordered by the Atlantic and the northwestern area of Spain. If you’re a true wine and food freak, I’d recommend picking up some of your favorite bottles in Bordeaux, head down to watch the surfers in Biarritz for a few days, then hop over into Spain and gorge on tapas (pintxos in Basque) in San Sebastian. That’s a heck of a vacation, right there. In fact, I totally want to take that vacation now.
>> Read more about wine tasting in France 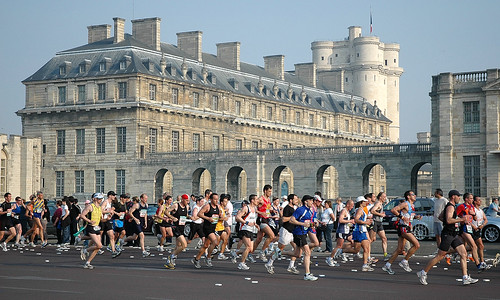 If you want to see Paris in full festive mode but without the holiday crowds, then have your trip coincide with the Paris Marathon, traditionally held within the first two weeks in April. And if you’re a runner, go ahead and register – it certainly it a unique way to see the city!
But if you’re like the rest of us, you’ll be quite content to mix it up with Parisians on the sidelines, cheering on the runners as they head from the Champs-Élysées throughout the city. Of particular note is the foot massage station at the Trocadéro – it’s a hoot!
>> Read more about things to do in Paris in April
Photo 3, machhaphuchhare; Photo 4, Mr~Poussnik