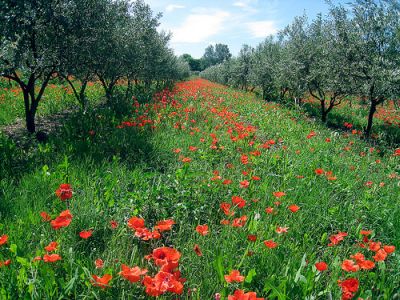 June is a fantastic time to visit France—not only is the weather warmer and often very pleasant, but the hoards of tourists that descend on France in July and August have not yet arrived. While tourist season has definitely arrived come June and you will of course see many more tourists than during the winter or early spring months, there are also lots of festivals and events to enjoy and many attractions have extended hours. June can often also be the last month is France before rates at hotels and attractions rise to high-season rates.

Perhaps the best part of visiting France in June is the abundance of beautiful flowers all over the country. Heavy spring rains have usually given way to more sunshine and left behind blooming fields of everything from tulips to sunflowers around the country.

June is also the month that truly kicks off summer in France, which means that the outdoor markets will be full with early summer produce, you’ll enjoy warm weather without wanting to melt and there are plenty of festivals and events that happen around the country to celebrate the return of warmer temperatures and long summer days.

What to do in France in June

While the weather does not tend to be as consistently hot in France during June like it is during July in France or August in France, you will still be able to enjoy lots of outdoor and summer activities in June. Because France is fairly far north, one of my very favorite parts of being in France near the summer solstice are the incredibly long days. Especially if you find yourself on the Brittany coast, you can enjoy days that last until nearly 11 pm. While showers sometimes stick around through the beginning of the month, you can definitely count on being able to enjoy the plethora of great outdoor activities during this month.

Shop at the Markets 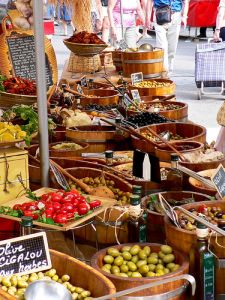 It is certainly no secret that France is home to some incredible markets. Whether you are perusing the flea markets of Paris or picking up fresh produce, cheeses and olives for a picnic lunch. While some of the produce at these markets in the early spring and winter months can be sparse, by June you’ll start to see early summer fruits like cherries and strawberries filling the stands at the outdoor markets.

While we haven’t yet reached the dog days of summer yet in June and temperature won’t be unbearably hot, the weather is certainly warm and pleasant enough in most of France to be able to enjoy a day at one of France’s many great beaches. People flock to the French coastlines during the summer months to soak up the sun, eat fresh gauffres (waffles) on the boardwalk and swim in the ocean. Whether you head to La Baulle or rub elbows with the rich and famous along the French Riviera, you’re sure to have a great time.

>>Check out the Best Beaches in France (coming soon)

While you may find some stores closed down for the month in Paris, many museums in France have extended hours during most of July to accommodate the extra tourists and locals. There is a rumor floating around that museums are now free for those under 25 in France (which is good news to some and doesn’t mean a thing to many of you).

>>Not sure what museums you should hit up? Check out Paris’ Top 50 Museums

France is laced with a network of connected canal systems (from the days before trains and automobiles) and today barge tours are an extremely popular way to see France during the warm summer months. Guest float through the French countryside on this canal cruises, stopping in villages along the way, biking alongside the boat and enjoying meals out on the deck.

One of my favorite summertime activities I did in France was Canoeing the Dordogne River. Not only was the scenery totally beautiful, but floating this gorgeous river was relaxing, fun and a unique way to see this part of southwestern France.

Holidays, Festivals and Events in France in June

While Bastille Day (the national French holiday) and the infamous Tour de France both take place during July in France, that doesn’t mean there aren’t plenty of great festivals and event that will keep you entertained throughout June in France. 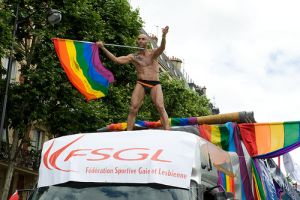 Paris Gay Pride Festival—What happens when you combine wacky French theatrics, one of the globes largest gay pride festivals in the world and the streets of Paris? The answer is a truly colorful, fun and entertaining event. Attracting nearly a half million people each year, this event takes over the streets of Paris at the end of June, complete with wild costumes, floats, and flamboyant balls which take place during the weeks surrounding the event.

Joan of Arc Festival—This is one of three festivals dedicated to this beloved French saint (the other two are in Orléans and Rouen). This festival celebrates the Saint’s return of the Dauphin for the coronation of Charles VII. The festive atmosphere is evident in processions, pageants and other street celebrations.

Paris Air Show—This event takes place during the third week in June in Paris, and is perfect for those aviation enthusiasts or history buffs. According to the web site, the “International Paris Air Show will be a unique opportunity to see more than 3 hours of flying displays daily. You will also be able to (re)discover mythical aircraft from the last century up to the present day, both in the Air & Space Museum and at the Show itself.”

Festival of Water (Fete de l’Eau)—This event in the town of Chartres (home to a magnificent cathedral that is worth a visit in itself), and involves a torchlight parade on the Eure River, music on the bridges and gorgeous light displays. 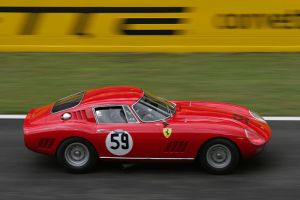 24 Hours of Le Mans Auto Race—Car enthusiasts around the world know this Brittany town not because of the green countryside surrounding it or for it’s attractions, but for the huge annual auto race that takes place at the track here. This sports car endurance race has been held annually near Le Mans since 1923 and runs on a circuit containing closed public roads that are meant not only to test a car and driver’s ability to be quick, but also to last over a 24-hour period.

Amiens, the Cathedral in Colors—This town which serves as the capital of the Picardy region is famous for its artistic and historical sites—including it famous Gothic cathedral, which is listed as a World Heritage site. In the Middle Ages, the sculpted arches of Amiens Cathedral were painted in magnificent bright colors. The multicolored facade has been beautifully refurbished as part of a larger, ongoing restoration project and for two weeks in June this cathedral is beautifully light up with colorful designs.

Regional Produce Fair, “Journees du Terroir” in Cap d’Agade—Not only is this beach along the French Mediterranean coast one of the best beaches in France, it is also home to a great outdoor market kind of fair in June. Head to this beach town in mid-June and get the chance to discover all the best artisan produce, wines, foods and delicacies as well as activities and leisure interests at the Chateau Laurens.

Vinexpo, Bordeaux—This international wine trade show is only for people involved in the global wine trade. That being said, if you’ve got a vineyard in the Willamette Valley or anywhere else this might be a great trip to make. With 2,400 exhibitors from 45 countries, 50,433 visitors from 140 countries and 1,356 journalists of 53 nationalities in 2007, Vinexpo is the only world-class event that brings together all wine and spirits industry players. If you just like the drink French wine, but don’t know a whole lot about it, brush up on your knowledge by reading my Guide to French Wine and French Wine: Understanding the 4 Categories.

Weather in France in June

While the weather in France during June will not be as hot as it is during July in France or August in France (which is a blessing to many), you are likely to get some pretty nice weather when traveling in June. With the summer solstice taking place towards the end of the month, you are guaranteed to have long days that hopefully are filled with sunshine. The rain can sometimes stick around Paris into June, but you also might find scorching hot and muggy days.

>>Find out more about weather in France and look at average temperatures in other cities around the country.

Depending on where you are planning to be in France during June will determine how you pack. Despite warm or hot temperatures almost everywhere in the country, keep in mind that it can still be chilly in the Alps, especially in the evenings or if you head high into the mountains. Paris can also still be on the rainy side in June, so make sure you bring layers and a light coat. Checking out my post on what to wear in France in the summer is sure way to look stylin’ in France in the warm months, but here is a list of things you shouldn’t forget:

Getting to France in July

While June certainly isn’t the peak travel month during the busy summer tourist season in France, you are also not the only traveler who has realized June is a great time to be in France. More tourists mean more crowded attractions and higher hotel rates and airfares. However, with enough searching, it is possible to a decent deal on airfare to France for June. Booking far in advance can also help land you a cheap flight to France, even in the peak summer months. If you will be arriving in France from another European city, you’ll probably be arriving by train or ferry. For those coming from London, taking the Eurostar between Paris and London is easiest and fastest way to get between France and UK, though there are other transportation options for getting from London to Paris.

Make sure you book your hotels in France early as it can be a tough time to get a room in June. With the great weather in France during this time of year and lots more people flooding into this popular tourist destination, even finding a hostel in France can be hard during June. Plan ahead and book early and you’ll have a better shot at getting a room. If you find yourself hanging out along the Mediterranean coast, Nice’s best hostels (including the famed Villa Saint Exupery) offer great accommodations on the cheap. If you are in Paris and just cannot imagine your stay there without a view of Paris’ most iconic structure, check out these Hotels with a View of the Eiffel Tower.