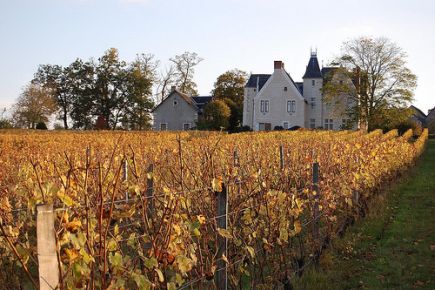 With plenty of blue sky days, pleasant temperatures and changing foliage enhancing the already picture-perfect villages, France is perhaps most beautiful in the Fall. September is still in the tail end of tourist season, October in France marks the beginning of low tourist season in France – which means no crowds, fewer tourists and cheaper rates on airfare and hotels in France.
For those of you who enjoy French wine (which should be just about everyone reading this right now), October is one of the main months during the grape harvest (vendanges) season – meaning there are lots of wine-related events and festivals around the country.

What to do in France in October

Go Wine Tasting or Go to a Wine Harvest Festival 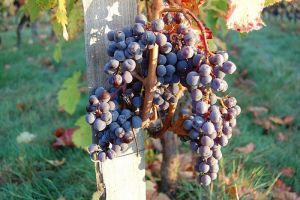 Fall brings grape harvests to France, and October is a great time to check out the many vineyards around the country and sip on some vin. I am a big fan of autumn in the Loire Valley, and by October the leaves should be a mixture of fiery reds and oranges. You can taste wine and check out the castles of the Loire, made even more beautiful surrounded by changing leaves. Since October is the main month of the vendanges, you will find the country side abuzz with the life.
>>Find out more about Wine Tasting in France. Or, if you are interested in learning more about French wine and the different regions or appellations of French wine, read A Guide to French Wine and French Wine: Understanding the 4 Categories
Take a Barge Cruise
Cooler temperatures but still plenty of pleasantly warm days make October a relaxing month to take a barge cruise through the canals that lace France. By October beautiful fall foliage can be found around the country, and taking a barge cruise can be a great way to soak it all in.
>>Read more about taking a barge cruise in France
Go Mushroom Hunting
As it turns out, October is the perfect month to go foraging for fungi in France. There are a wide variety of mushrooms that grow in different wooded regions of France, and mushroom hunters know that a few days after a good rain is the perfect time to find the fungi growing in the woods. Of course, it is very important to keep in mind that many mushrooms are poisonous, so you should definitely do your research and talk to experts before you put any of your fungi finds in your mouth. The site rogersmushrooms.com, based on Roger Phillips’ work “Mushrooms and other fungi of Great Britain and Europe,” can serves as a great resource for identifying mushrooms. And remember, if you are not into mushroom hunting but you are into mushroom eating, you can always find plenty of mushrooms in the outdoor markets in October. Which reminds me…
Shop at the Outdoor Markets 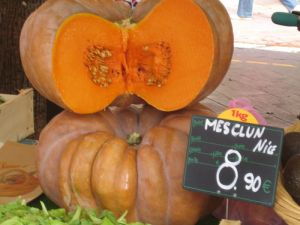 October in France marks more than just the wine harvest season in France. In fact, this fall month brings some of France’s best harvests, with the best produce filling the markets with apples and pears in Normandy and Brittany and bright orange squashes and pumpkins, mushrooms in the Pyrenees and more. Foodies and gourmands have long loved France as a culinary destination, and this is a particularly great time to be shopping in France’s markets for the freshest, best ingredients.
>>Read more about Shopping in France’s Markets

Holidays, Festivals and Events in France in October

Cider and Chestnut Festival in Sauveterre-de-Rouergue—This picturesque city overlooking an idyllic valley in the Midi-Pyrénées region of France is known for its ancient chestnut tress and high-quality cider that’s made fresh from the orchard harvests nearby. Every October, a traditional festival is held to celebrate it! The cobbled central square buzzes with light and color late into the night, so why not enjoy some seasonal treats and a traditional concert after a day spent walking through crisp autumn leaves in the surrounding countryside?
Halloween in France—While this American holiday has yet to fully catch on in France, in more recent years there have been more and more events across France celebrating Halloween. Lots of kids are now trick-or-treating, and you can find a handful of Halloween celebrations around the country. However, those looking to get wild on Halloween have the prefect excuse to do nothing the next day – the day after Halloween (November 1) is La Toussaint (All Saint’s Day), a national holiday in France.
Descent from the high mountain pastures in Annecy—Every October, there is a public celebration in honor of the traditional autumn descent of the herds from the mountain pastures high above the city. There is a procession of the animals from the pastures through town, as well as bands, folklore groups, traditional crafts, food demonstrations and more.
Sorcerers’ Festival in Chalindrey—The Fête des Sorcières has been held for nearly a century in Chalindrey, home to a 16th-century witch hunt and the Fort du Cognelot, known as Devil’s Point. Rather than buying into the commercial side of Halloween, this festival seeks to evoke its Celtic roots – while still scaring you witless. Alongside the dance on Saturday night, there are exhibitions and screenings of scary films. And for the younger festival-goers, there’s face-painting and the election of Miss Sorcière.
Pepper Festival in Espelette—If you find yourself hanging out in southwestern French Basque country in October, check out the daylong Fête du Piment in late October in Espelette. Farmers sample and sell product during the festival. Visitors can enjoy music, dance, awards ceremonies, eating and drinking. The red peppers from this region (which originated in Mexico) became a staple in Basque cuisine starting in the 16th century and the festival honoring these red peppers draws more than 200,000 people each year. 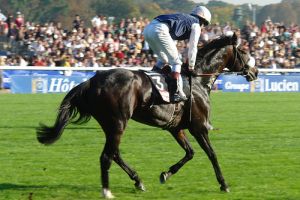 Prix de l’Arc de Triomphe—This is France’s biggest horse race (think the Kentucky Derby of France), usually held on the first Sunday in October at the Longchamp Racecourse near Paris. It is the most prestigious horse race in Europe and its slogan is “Ce n’est pas une course, c’est un monument” – while hard to translate exactly, it’s a play on the word “monument,” which can mean a tradition or time-honored institution, but refers to the Arc de Triomphe as well. OH, those French and their cute sayings.
Fete des Vendanges in Banyuls-sur-Mer—Located in the heart of the Roussillon wine region in France, over 2,000 people come to Banyuls-sur-Mer each year in October to celebrate the grape harvest. Children can stomp grapes the traditional way, there is lots of wine, music and food and a traditional wine-growers lunch is served on the beach.
L’Armagnac en Fête—As you might guess from the name, Labastide-d’Armagnac is one of the best preserved bastide towns in France (original Medieval walled cities that were centered on a market square with houses set in narrow, often gridded streets), and each year in October there is a festival in town celebrating the harvest. This region of France is known for its eau-de-vie, which translates directly as “water of life” but is a lighter, more delicate version of cognac Brandy. If you are a cycling fan, numerous former Tour de France champs have left their shirts in this town—including a Lance Armstrong-signed yellow jersey. You will also find a small collection of antique bikes and more Tour de France collector’s items.

Weather in France in October

What to Wear in France in October

Autumn is a difficult time of the year to pack for a trip to France as the weather can be unpredictable and temperatures can be all over the place. You should expect everything from warm, sunny days to rainy evenings that could chill you to the bone. A good way to be prepared for a variety of weather conditions is to think layers: Bring a light jacket, an umbrella and sweaters for layering over lighter pieces.
If you want to know how to dress more like a French person and less like a tourist, you may also want to check out my posts on what to wear in France:

For figuring out what to bring on your trip to France in the fall, you are probably best off combining items from both lists and layering.

Getting to France in October

Luckily while October is still a lovely time to visit France, it is no longer high tourist season, which means everything from airfare to France to hotels in France will be cheaper. Because travel in France during off-peak fall, winter and spring months is always cheaper than, say, France in August, October is a great time to score a cheap flight to France.

Where to Stay in France in October

Since October is no longer in high tourist season in France, it is also much easier to find hotels in France and hostels in France. October also often marks the first month when hotels and hostels lower their rates to low-season levels.
Keep in mind that if you are looking for a hotel near one of the major wine harvesting festivals this month, you will probably still have to book far in advance.
If you find yourself hanging out on the still-warm French Riviera, you can check out Nice’s Best Hostels or Hotels near the Promenade des Anglais in Nice. If you are in Paris and cannot imagine a stay in the City of Lights without a view of Paris’ most iconic structure, you may want to check out Hotels with a view of the Eiffel Tower.
Not Going to France in October? Check out these other times of the year to go: