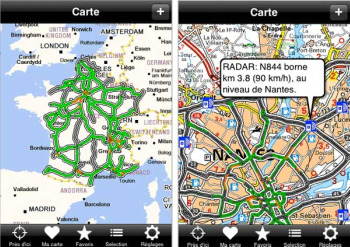 Travelers use all kinds of tools when they get out and hit the road – travel guides, maps, phrase books, calculators for currency conversion – and increasingly often those tools are taking a technological turn. You don’t even have to be a geek to appreciate how gadgets like the iPhone or iPod Touch can lighten the load, either – just by toting your iPhone in your daypack or purse means you don’t have to carry all the things listed in the first sentence of this article.
It’s a good thing, then, that there are so many France travel apps for the iPhone.
This article won’t be a complete list of the iPhone apps for France – it can’t possibly be, what with all the new apps being added by the nanosecond – but it is a selection of some of the best France travel apps currently available. If I missed your favorite, please leave a comment below.
And in case you’re wondering about the lack of Paris-specific apps listed here, I figured it made sense not to re-invent the wheel since there’s already a long list of Paris iPhone apps over at sister site WhyGo Paris! So if your trip to France includes the country’s capital city, then be sure to check out that companion article along with this one to fully kit your iPhone up for the adventure.