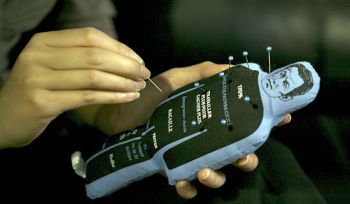 Apparently the French President doesn’t have a great sense of humor when it comes to people quite literally poking fun at him. A voodoo doll in Sarkozy’s likeness, which went on sale October 9, has apparently infuriated the unpopular French President. The International Herald Tribune reported on Friday, October 30 that the French courts recently threw out a request by the President’s lawyer demanding a ban on the doll, claiming that the doll is protected by what it called the “right to humor”.

President Sarkozy has notoriously had a shaky relationship with the press, both domestically and internationally. The President was criticized for walking out on Leslie Stahl during a 60 minutes interview last year when the interviewer asked him a question regarding his then –wife Cecilia (it is rumored Sarkozy had already taken up with former supermodel Carla Bruni). The walk out on the interview was just the first of many unfavorable run-ins with the press. In February, Sarkozy sued a journalist for publishing the content of a text message he claimed he never sent to his former wife days before marrying Bruni. The President has also sued t-shirt producers for making fun of his last name.

While Sarkozy’s predecessors Jacques Chirac and Francois Mitterand committed themselves never to take legal action against the press, Sarkozy seems to not have taken the same line. Along with being further to the right than the past two previous French presidents, Sarkozy apparently is far less tolerant of negative press.

One French newspaper put aptly, “Is the president of the republic superstitious?”