Hi, and welcome to the first month of our France Blogging Roundtable series. Each month I and four awesome bloggers write about the same France-related topic, sharing our unique perspectives with you and each other. This month’s topic is art in France. Do you have suggestions for future topics? Let us know by leaving a note in the comments! And make sure to follow #FranceFriday on Twitter to see everyone’s posts each month. 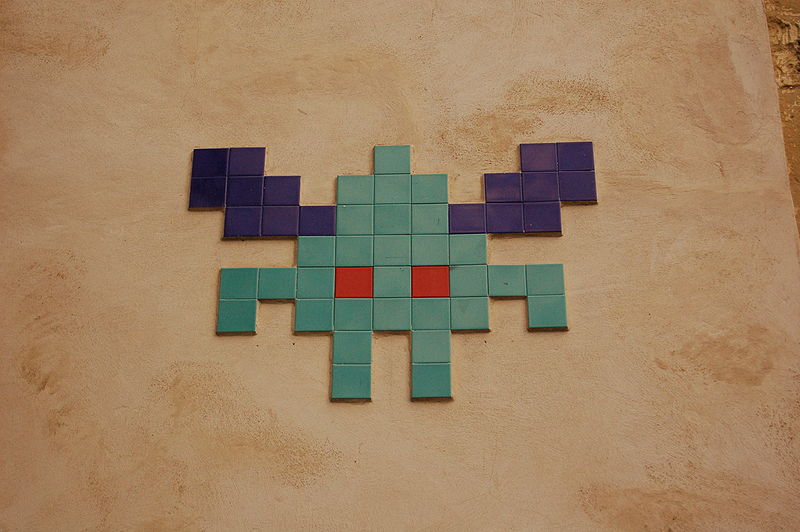 France is known for its art – whether it’s the Mona Lisa hanging in the Louvre Museum in Paris, or the Lascaux cave paintings in the southwest. And as in practically every country on earth, when you’re traveling around France you’ll see your fair share of street art. But there’s one artist in particular whose combination of whimsy, guerilla tactics and creativity make his work the closest to my heart: Invader.
For those of you who may not know, Space Invaders was a popular video game back in the day (1978, to be exact) in which you had to shoot lasers at invaders from space. It was a basic game, with crudely designed pixelated aliens (hey, it was the ’70s), which has made it easy for this Parisian-born artist to reconstruct them in mosaic form. Once created, he sticks them high up (10-15 feet) on building exteriors. They range in size, but normally a single invader is usually about a foot wide.
He’s “invaded” cities on five continents, but has practically carpeted France with his Space Invader-themed mosaics. However, it should be noted this this isn’t just any graffiti tagger. Although his real name is kept private, Invader has shown in many formal exhibitions all over the world. 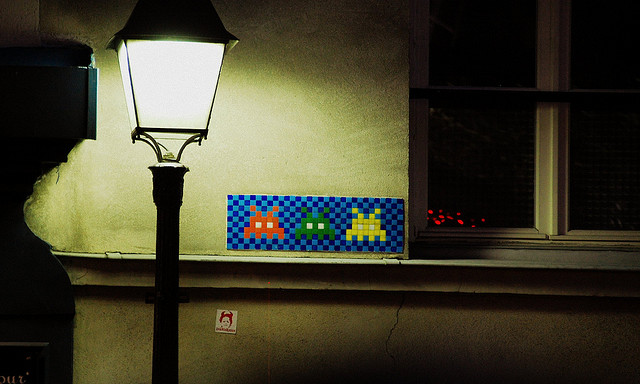 Where To Find Invader

If you’re visiting any of the following cities, make sure to keep an eye out for invaders: Paris, Aix-en-Provence, Anvers, Montpellier, Grenoble, Avignon, Pau, Clermont-Ferrand, Lyon, Marseille, Montauban, Toulouse, Lille, Bordeaux, Rennes, Bastia on Corsica, and Saint-Tropez. Here are some installations of note:

Understandably, Invader’s hometown of Paris has the most pieces – a total of 1,000! They range from your run-of-the-mill invader figure to Pac-Man ghosts to “I (heart) You” with an invader in place of the heart. (“I Invade You?!”) In fact, it’s almost impossible not to see an invader while you’re in Paris.

Montpellier’s invaders (44 in total) are unique in that, when placed on a map, take on the shape of one large invader – another indication that this isn’t some haphazard affair. Whenever I have kids visiting me, I always make it a point to show them one, and then make it a game to find the rest.

Invader was invited to show at an exhibition in Avignon, but the organizers discovered that due to local laws he could not post on historic buildings (which pretty much leaves out the entire city). He decided to do it anyway, making each invader “camouflaged” by matching the color of the tiles to each building’s exterior color. Far from being angry, however, the city has kept them in place to this day. 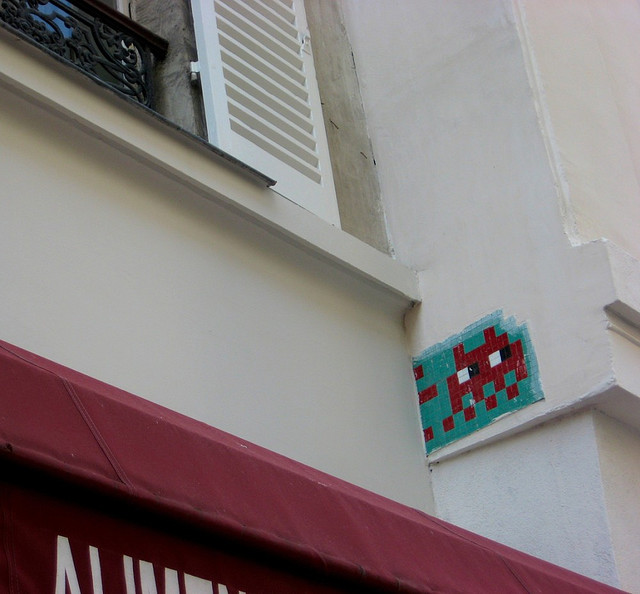 What’s interesting, to me at least, is that they are tolerated, and even welcomed, throughout France. In Grenoble, for example, you can get a map of their locations at the Ecole des Beaux Arts, the fine art university. Lyon’s invaders were part of their 2001 Bienniale. And as you can see above, even exterior renovations don’t mean they’re gone for good.
Have you seen these invaders when you’ve visited France? If so, let me know. And be sure to be on the lookout for them the next time you visit!

EuroCheapo
Chez Loulou
Food Lover’s Odyssey
Life’s A Feast (check back for the link!)
Check back each month for new installments of our series. Thanks!
Photos: Wikipedia, LWY, tpholland