FULL DISCLOSURE: I stayed at the hotel for free, but my opinions are mine and mine alone. 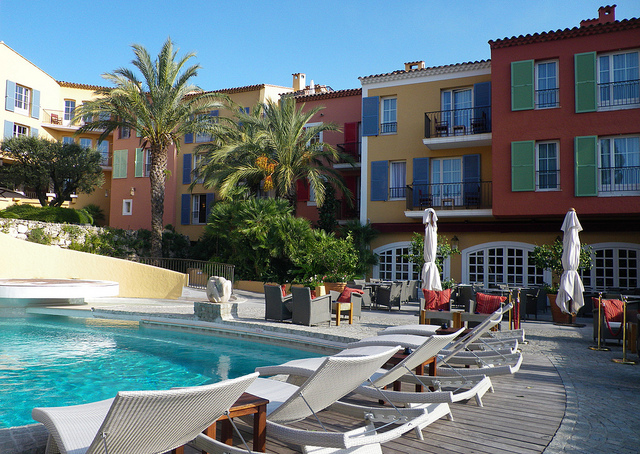 Here at WhyGo France, our goal is to get you inspired to travel to France by showing you just how doable it is. So, we don’t normally talk about luxury getaways or splurging while on vacation. After all, you still want to pay your bills once you get back to your regularly scheduled life! But I was recently invited by Hotel Byblos in Saint-Tropez to spend a couple nights there, and OMG you guys – if there is one time in your life you’re going to splurge while on vacation in France, forget Paris. This is it.
My invitation included two nights’ stay, breakfast both days, a dinner at their on-site restaurant Spoon, and a treatment at Spa Byblos By Sisley Cosmetics. But before you start thinking that they really hooked me up, this is a typical offer for guests who choose their two-night “Sensations Package.” They have greater and lesser packages, depending on the type of room, how many nights you’re staying and the time of year.

Things You Should Know About Hotel Byblos 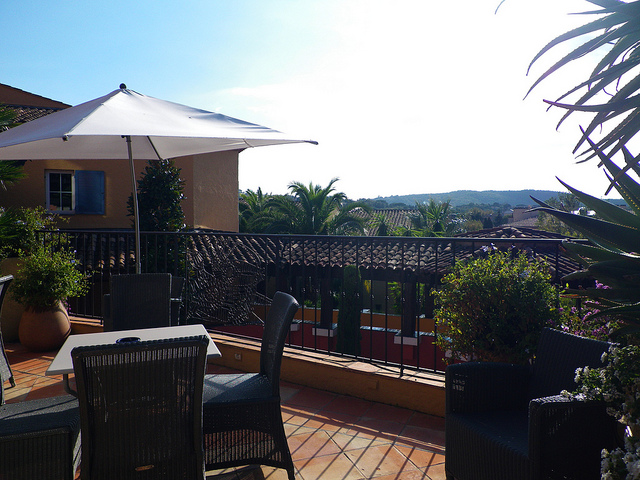 The hotel itself is inviting (if confusing at first!).

Hotel Byblos is not one structure; it’s built to look like a candy-colored village with the pool and gazebo bar at its center. When you enter the hotel you’re at the top of the “village,” and it kind of wends its way down the hill in a bit of a sprawl. I had to be led to Spoon for dinner my first night, and even the next afternoon and evening I was still finding hidden nook-and-cranny seating areas. It has a comfortable, even intimate feel – although I’m guessing the pool area, front and center, is quite the scene in high summer. 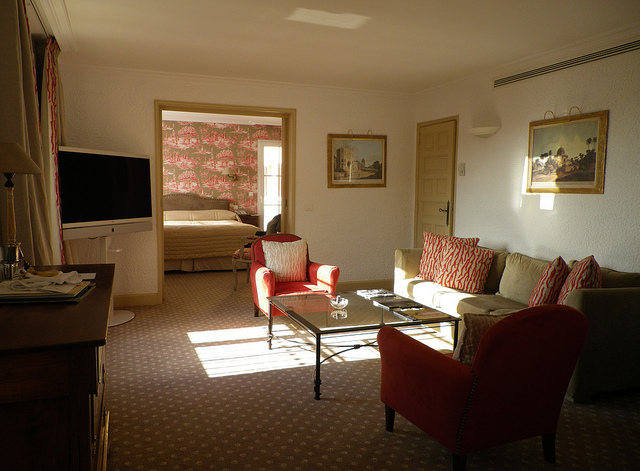 The rooms are five-star, but not intimidatingly so.

I’ve stayed at a few five-star hotels in my day, and I’ve found that somewhere along the line “luxury” got translated into “sterile and severe” when it came to the rooms. Happily, this is not the case at Hotel Byblos. Although the suite they put me in was clearly meant for someone way above my pay grade – it had three balconies, an outdoor shower and a bathroom I could have thrown a party in – it had a convivial elegance that I adored. It was less “Are you cool enough to stay here?” and more “You’ve arrived (both literally and metaphorically); relax.” And from what I’ve seen of their other rooms, the theme runs throughout. 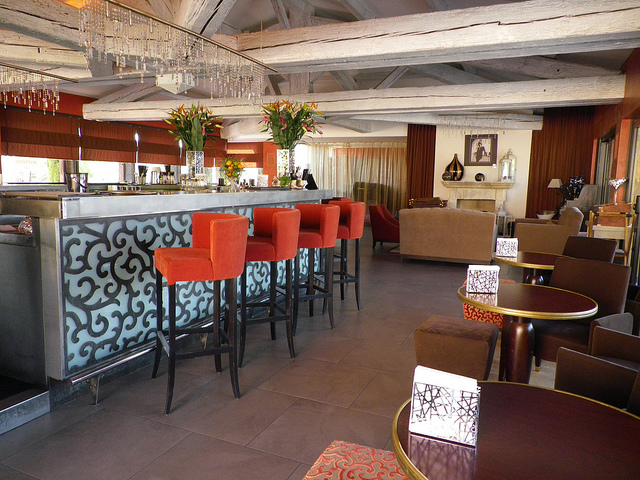 My complimentary dinner at Spoon was good. My main course was a “Pasta Pot” with lobster Bolognaise, which was a great twist and seriously tasty. They bring out an enormous pot of homemade pasta, transfer some of it to a bowl, and you dress it yourself with the sauce and shaved Parmiggiano. The thing is, they leave the pasta pot on the table, which means by the time I was ready for seconds it was not as hot and a little soggy. I think it’s probably meant to be shared, though, and not to be gobbled up by a starving lunatic who had just traveled for 13 hours.
The second night, on my own dime, I tried out the food at the poolside lounge. The menu is called Le Byni’z, and features teensy portions of what’s offered at their other on-site restaurant, Le B. I had an outstanding raw tuna with foie gras and ginger, a Byblos burger, goat cheese samosas, and finished it all up with macaron-sized Tropéziennes, which is the town’s signature pastry. Everything was brilliantly executed, the perfect bite size, and just plain delicious. 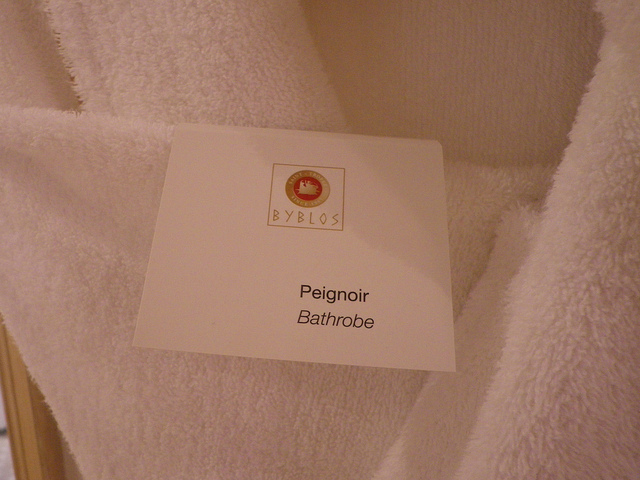 Spa Byblos By Sisley Cosmetics has their act together.

First of all, the elevator to the Spa Byblos level opens up directly into the spa, which means that if you want, you can leave your room in one of the plush bathrobes they provide and go there without traipsing through any public areas looking like it’s shower time at the freshman dorm. I opted for a facial treatment, which was a full hour and included roughly 500 awesome things done to my face as well as an expert foot, neck and shoulder massage in a private room that I wanted to live in. My favorite part was when I was offered a surprisingly delicious detox drink and left alone for a while afterwards, to re-acclimate to a reality in which I was not going to be massaged for the rest of my life.

Their service is top-notch.

With the caveat that those who knew why I was there definitely snapped to attention, staff who didn’t even know whether or not I was a guest treated me like I was someone important. Which, at a five-star hotel in St-Tropez, is a fair guess on their part. But not Hollywood-style, like they were waiting to be discovered; they were confident, warm and not at all obsequious. Also, they came and retrieved me when, abandoned like a street urchin at the bus station upon my arrival in the evening, the taxi service I called wouldn’t take me.

And it seems like it’s staff policy to speak to guests in whatever language they’re spoken to, so this is not the place to try out your French. Unlike most places in France, your efforts will not be met with bad English and a withering glance; they’ll cheerfully reply in French, and then you’ll be lost. They speak English really well, actually, so feel free to be The English Speaker in the house. (I learned this the hard way when I spoke French and then lapsed into Italian; so did the hotel receptionist, and then we were off to the races!)

It’s closed from November through March.

I mention this because it’s important for trip planning, but also to note that although I was there just before their closing weekend, there were few signs of the place winding down. Other than their little boutique section just under the lobby, the place was up and running. I never felt like they were waiting for me to leave so they could close up shop.

Why I Think You Should Splurge On Hotel Byblos

Well, first of all, it’s Saint-Tropez. It’s the big leagues, and it’s not the easiest place to get to. So if you’re going to make the effort to see what all the fuss is about – and you should – then do it right. But more than that, while it is a splurge, it’s not extortionist-level splurge. Their packages are surprisingly good deals, and there were no $20 Cokes on any menu that I saw. You absolutely get your money’s worth.
Visiting Saint-Tropez
How to Get to Saint-Tropez
Best Places to Honeymoon in France