French women are putting their bikini tops back on 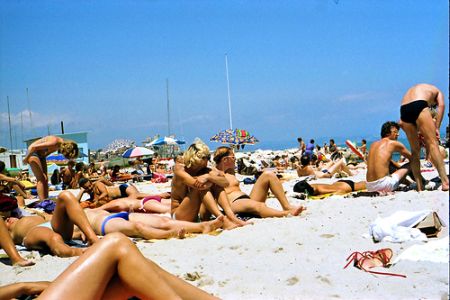 It seems that the days of topless bathing beauties on French beaches may be coming to an end. While the country used to pride itself on having beaches packed with half naked women, the younger generation of French women are turning away from hanging out on the beach sans bikini top. According to an article in New York Magazine, a growing number of ladies between the ages of 18 and 30 are turning against the topless tradition in France. Changing attitudes ion feminism are probably to blame for the younger generation of French women choosing to keep their tops on. Christophe Granger writes in his new book Les Corps d’Ete that going topless in the 1960s and 70s was a sign of “sexual liberation and a return to nature.” However, times have changed and attitudes on feminism have shifted—meaning more and more women are investing in both pieces of that bikini (and as Granger writes focusing their feminist efforts on equal pay and workplace opportunities instead).

Going topless on the Paris Plage (a man-made “beach” that is created along the banks of the Seine River every summer), is actually illegal, and untying that bikini top could even result in a fine. What was once considered a symbol of the feminist movement in France, going topless on the beaches in France just doesn’t seem to be so en vogue these days. In a country that for years prided itself on being the capital of seaside half-nudity, now it seems most of the women on the beaches in France leaving their tops off are of the older generation.

So, guys, while you may have been dreaming of topless women on the beaches ever since you booked your flights to Paris, you may be disappointed to find that most of the women leaving their tops at home these days are over 60 (cue disappointment sound effect). Even the mayor of Saint Tropez, a famous beach along the Mediterranean in southern France once known for its gaggles of topless bathing beauties, says that image of topless women is outdated.

According to a recent poll, 24% of women were perturbed by toplessness on beaches, while 57% said it was OK in a garden. So, as the French put their tops back on, you may just feel like the party is over. But rest assured, guys and gals who like to avoid tan lines, not all French women are relinquishing their right to hang out with out their bikini tops off. A group of young feminists called Les Tumultueuses are still fighting for topless bathing rights in public swimming pools—recently staging a protest by diving into the Les Halles public pool in Paris sans tops.

Now that we know a large number of French women are opting to keep their tops on, it would be interesting to see how international travelers coming to France feel about the changing attitudes regarding topless sunbathing. Personally, I’d like someone to conduct a poll in one of the party hostels in Paris to find out if young, fun-loving females from around the world are disappointed they too will not be able to forgo the bikini top during their trip to France.