Getting from Barcelona to Nice 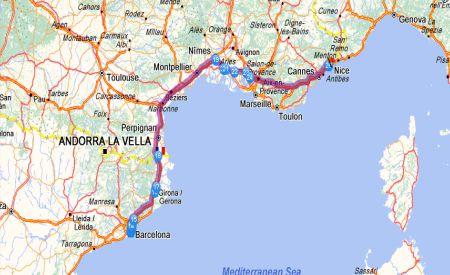 A popular French travel itinerary is to travel along the coast on your way from Barcelona to Nice. Although it encompasses just a fraction of the country’s diverse landscape, you still can see the vast differences – from the more rugged Languedoc coast to the pristine towns of the French Riviera.
There is no direct route by public transit, but with a few tips and knowing the options, you should be able to master this journey without too much trouble.

Train is usually the fastest and easiest way to travel between two European cities, though because there is no direct route from Barcelona to Nice, this may be an exception to this general rule. Also, while trains in Europe tend to be faster than cars, this route is also an exception to this rule: The drive takes about 6-8 hours, and the train journey will take you 10-11. That being said, if you having no intentions of renting a car in France (or Spain) and would prefer to stay on the ground, it is possible to travel from Barcelona to Nice via train.
Many fans of traveling by train usually scope out the night train option, as it saves money on a hotel room and you wake up ready to go at your destination. However, for the Barcelona-Nice route, it’s actually more expensive and takes longer. And it takes you way out of your way! And you miss all the awesome scenery! If you must know, though, it leaves Barcelona Franca station at around 7.30PM and arrives in – wait for it – Geneva, Switzerland at about 5.30AM. Then you have to take a TGV to Avignon, and another TGV to Nice. As of March 2011 it costs 237 euro and takes almost 18 frraking hours. You could walk there in less time.
The better option is to take the daytime trains. They cost from 97 – 125 euro total and take only 9.5 hours. There are several routes, but the best in my humble opinion is the one that hugs the coast the whole way. It leaves at 9AM from Barcelona Sants station with train changes in Figueres and Montpellier and gets you into Nice around 6.30PM. Just in time for cocktails by the sea!

If you are renting a car in France (or Spain) during your trip, you can do the entire drive in about 6-8hours. Basically, the car route follows the Mediterranean Sea (the scenery is quite spectacular). Do keep in mind, however that rental car companies can charge you huge fees for renting a car in one location and dropping it off in another. Also remember that many of the roads in Europe require tolls and that gas prices tend to be much higher than in the U.S.
Despite the possibility of higher costs for driving, the drive is relaxing and spectacular at the same time. The roads between these two cities consist of all well maintained and fast autroutes that allow you to cruise at high speeds. The entire journey is approximately 670 km.
Here’s the route:

>>If you want specific driving directions and maps, there is a great site that allows you to plot your journey across Europe by car at www.viamichelin.com.

Iberia Airline offers non-stop service between Barcelona and Nice (airport codes BCN and NCE) that only takes about 1.5 hours. Flight prices will vary depending on the time of year, with summer prices being much higher than winter ones. Read more information about cheap flights to Nice.
Super-cheapo airlines like Ryanair and easyJet can get you to Nice from Barcelona, but you’re going to have to fly through Paris. It can be done – just be careful about flight times, and be aware that Ryanair flies into Beauvais – which is out in the middle of nowhere, so scrap those plans for an extended layover with a quick jaunt into the City of Light.