Getting from Nice to Marseille 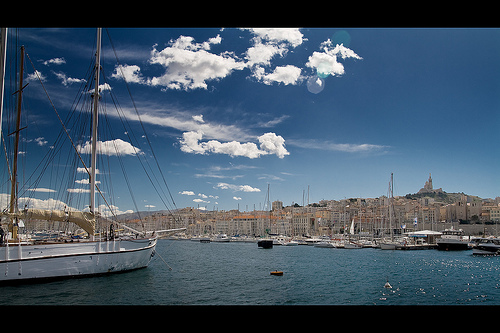 Nice to Marseille By Car

As I mentioned in my post about summer road trip ideas, If you’re going to drive anywhere in France, the Côte d’Azur is the place. It’s a straight shot along the A8, which will get you there in a bit over two hours. But to get your money’s worth, even though it takes a couple hours longer, you really want to take the D559 along the coast. This drive in and of itself can be a day trip, as it takes you through the Riviera beach towns you’ve heard so much about, and the view could not be more inspiring. And in a car, you can stop wherever you’d like for some fresh oysters, a photo op or even a dip in the Mediterranean!

Nice to Marseille By Train

The train ride from Nice to Marseille is one of the few in France that takes just about as much time as driving – roughly 2.5 hours, which with a bit of town traffic is equivalent to taking the A8 autoroute. Trains leave fairly frequently from Nice Ville station and cost between €30-38 depending on time of day and some other factors. And that’s about equivalent to driving as well, if you’re traveling in a pair, between gas and tolls.
But the thing about the train from Nice to Marseille is this: There is no risk of you running off the road as you gaze at the jaw-dropping scenery on this route. And at some points, the train gives you an even better view than the road – and you can take pictures without risking life and limb (or even a pit stop!).
No matter which way you choose, though, please make the effort to include both cities in your France vacation itinerary. You won’t regret it. And I’m here to help – with a bunch of handy information that will get you well on your way!

Lastly, check out this video that’s a photo montage of Marseille. I think it will surprise you!