Getting from Nice to St Tropez 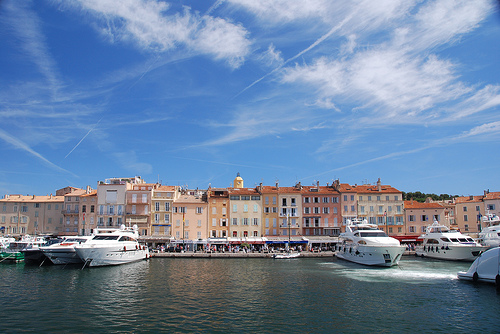 Are you ready to rock the Riviera? Then you’re ready for St. Tropez. It’s just as glitzy as you imagine. It’s worth the trip to see just what all the fuss is about. But what many people aren’t ready for is the size of the town – it’s a tiny fishing village, much smaller than Nice. And in the winter months, it’s really quite adorable and lovely. I’d put it on the list, especially in the off season.
Here’s how to get from Nice to St. Tropez, in ways other than by marrying rich.

You know the saying, “You can’t get there from here?” That applies to St. Tropez. They don’t have a train station. My guess is that it’s to keep the riff-raff away, but there’s probably a more benign explanation.
In any case, what you can do is take the train from Nice Ville station to St. Raphaël, which has a bus that takes you to St. Tropez. It takes about an hour and costs about €10-11. The bus is a local line, so that will cost you an additional €1. You can also take Les Bateaux de St-Raphaël and come off the dock in St. Tropez pretending you just pulled up in our megayacht.

There are several bus lines that serve the Côte d’Azur; the Lignes d’Azur is the major one, and you can check out this PDF for more information.

Yes, this is actually an option, so I’m just throwing it out there for you. Turn up your speakers and get a load of this crazy site, which gives you all the info you need to book your trip and an idea of just what you’re in for. If I had some money to burn (it’s €210), I would TOTALLY DO THIS. The view must be ridiculous. 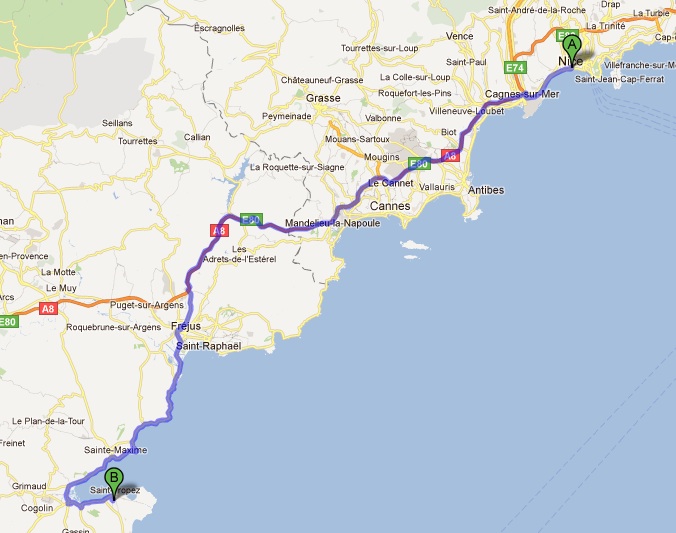 Oh, yeah, the car. Not quite as glamorous as a helicopter. But it will still get you to where you are going, and let me tell you – even though the map above shows you the most direct route, take the extra time and drive along the coast. It’s freaking spectacular. Honestly, you’ve never seen anything like it. However, it’s not for the faint of heart – sheer drops abound.
After a drive like that, you may need a place to rest your head. Here’s a quick way to search for hotels:

And with this handy tool, you can plan your whole trip!