Getting from Paris to Bordeaux 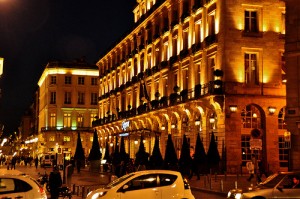 One of the greatest parts about France is that there is a huge diversity of scenery, regions and cultures that are all located relatively close to each other. Because the entire country is just about the same size as Texas and is well linked by a high-speed train system and well-maintained Autoroutes, it is easy to get from Paris to almost anywhere in France with ease.
If you are looking to venture to France’s renowned wine region that surrounds the city of Bordeaux, you can travel between Paris and Bordeaux without taking up too much of your vacation time at all. Let’s take a look at exactly how to do that, shall we?
>>Read more about other wine regions of France.
>>Need to know where Bordeaux is, exactly? Check out this informative map of France.
>>Check out our picks for budget hotels in Bordeaux.

I am a huge advocate of train travel in France. It’s just the fastest and often the easiest way to get from place to place. Especially with the well connected TGV (high-speed train) rail system that links Paris to many major cities in France, you can easily travel from one side of the country to the other in just a few short hours.
There is a high-speed TGV train that runs from Paris Montparnasse to Bordeaux that leaves about every two hours. The trip takes only 3 hours (as a comparison, driving takes at least seven). Prices for the TGV vary much like airfares do, but the TGV generally costs between €40-70 each way, which is well worth the price for the speed and convenience. If you have a bit more time but not as much money, there are slower trains that cost less and stop in smaller towns along the way.
>>Read more about Train Travel in France and the TGV: France’s high-speed train.
>>Traveling by Eurail pass? Read more about your Eurail options.

When the train only takes 3 hours from downtown Paris to downtown Bordeaux, it seems silly to consider flying between these two cities. However, if you are determined to do this journey by air, there is an airport located in Merignac, which is approximately 10 kms west of the city. While the airport does serve international destinations (mostly in the UK and Spain), most of the flights coming into this airport arrive from Paris’ Orly airport.
There are several airlines that fly into Bordeaux’s Merignac Airport, though Air France and discount carrier EasyJet provide the most regular flights from Paris.
A shuttle bus connects the airport with Bordeaux’s central train station. Shuttles depart every 45 minutes from 07:45 until 22:45 each day, and the trip takes around 40 minutes.
>>Check out other major airports in France, you jet-setter.

While driving to Bordeaux will take you  twice as long as taking the train, if you plan on renting a car in France Bordeaux is easy to reach by car and the drive can be a good way to make stops along the way and enjoy the countryside or canoe down the Dordogne river.
As it’s the main city in this part of southwestern France, several major roads run through the city. From Paris, take the A10 Autoroute south through the towns of Orleans, Tours and Poitiers into Bordeaux. All of the major highways connect with Bordeaux’s ring road, from which you can enter the city at whatever point you wish.
>>Read more about Driving in France or, if you want more detailed driving instructions and maps for your journey, check out the Via Michelin website.

In some countries, bus travel is common and easy. France is not generally one of those countries. There are regional bus companies which cover, say, the Normandy or Brittany regions. There is also one company which will get you from Paris to other major cities in other countries (Eurolines). But unlike in other countries, there isn’t a national French bus company that will help you get between two cities in different regions – like Paris and and Bordeaux – easily.
Eurolines also has some international bus routes that stop in Bordeaux on its run from Paris-Tours-Bordeaux before heading onward to Spain, but you cannot take that bus only from Paris to Bordeaux. I know, it’s weird. Anyway, check the Eurolines website for schedules for that route.
photo: geoliv