Getting from Paris to Lyon 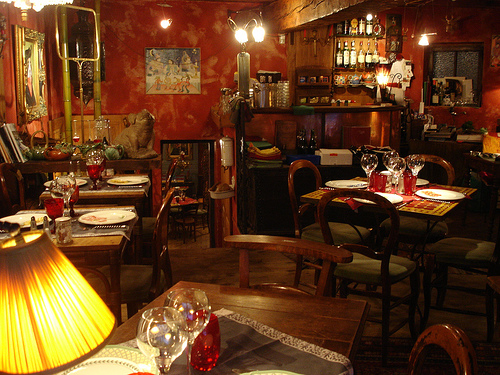 I’ll let you in on a little secret: There is a small but passionate group of people in this world who don’t want you to visit Lyon. You may have heard of them; they’re called foodies. But don’t let their harmless-sounding nickname fool you! They would rather you spent all your time swooning over a croissant au beurre in Paris than deprive them of a table at their favorite bouchon in Lyon.
Travelers, now is the time to stand up to these foes! Get thee to Lyon post haste, and claim what is rightfully yours! I’ve infiltrated the underground foodie scene, and am now prepared to unlock the hidden maps that show you exactly how to get from Paris to Lyon. Go, go you brave souls! And report back from the front lines of the foodie wars! (After your nap, of course.) 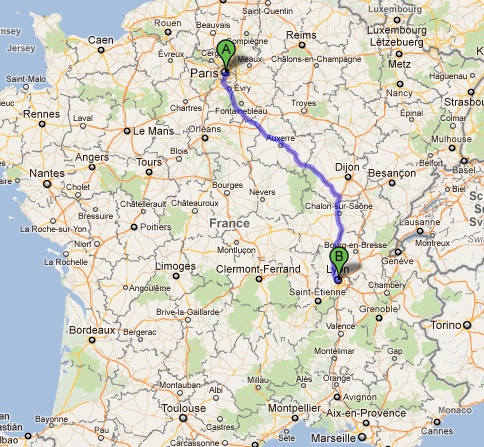 Because Lyon is such a major French city – second only to Paris in population, don’tcha know – it makes sense that one of the major highways leading out of Paris gives you pretty much a straight shot to Lyon’s city center, 289 miles south-southeast. It’s the A6, and if you can rent a car, point it at Quai de Bercy and then the Périphérique, or outer ring road, look for signs to A6 Lyon and go.
That’s the good news. The bad news, at least if you’re in a hurry, is that it’s going to take you a shade over five hours – on a good day. And the annoying news, common when driving in France is that it’s a toll road, which means you have to keep an eye on the signs to make sure you don’t get caught in a toll lane that only takes French credit cards or the French version of the EZ-Pass, and you’ll have to have cash on hand. Oh, and gas costs a fortune. Which leads us to getting from Paris to Lyon…

Ahhh, the train. Seriously, you guys, take the train. The TGV takes you from Paris’ Gare de Lyon (coincidence? I think not) to Lyon Part Dieu station, smack in the city center, in about two hours for around €66.50. Boom. No tolls, no gas, no traffic, no parking. Leave in the morning, and get there in plenty of time for your first heavenly lunch. Look, I’ve even included a handy train reservation thing right here on this post, so you can find out more about just how easy it is, and book your ticket right now and everything. And here’s more about taking the train in France.
Of course, if you insist on being a jet-setter, you can always get from Paris to Lyon…

Arriving in Lyon by plane makes sense if it’s your final destination from an overseas trip. You land in Paris first, and then switch planes to Lyon-Saint Exupéry Airport. Air France has flights from Paris-CDG and Paris-Orly airports. But if you’re staying in Paris and are thinking about flying to Lyon, well, stop it. It will cost a fortune and between the check-in rigamarole and getting to and from both airports, it’s not worth it.
That being said, if you want to visit Lyon from somewhere outside of France, there are lots of low-cost airlines that fly there directly without stopping in Paris first – easyJet brings you to Lyon from pretty much every major European city.
>>Are you ready to hang out in Lyon? Check out these handy links to help you get started planning your trip!

And here are more helpful posts for planning your trip to France: