Getting from Paris to Marseille 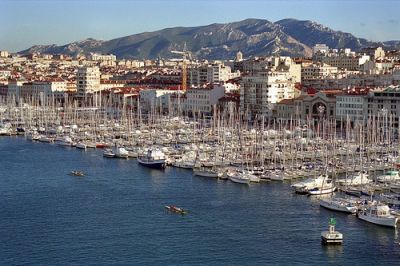 The French national anthem La Marseillaise was actually written by revolutionaries marching on foot from Marseille to Paris. Fortunately, we now live in an age where cars, trains and planes are all the chosen modes of transportation, which means getting from Paris to Marseille is a whole lot easier than it used to be.
Considered to be the “melting pot” of France, Marseille is a dynamic city located on the shores of France’s Mediterranean coast. It’s the third largest city in France by population (after Paris and Lyon), and Marseille has long served as an important port city in France. It’s also one of the oldest cities in Europe, being established by the Phoenicians sometime around 600 B.C. Here is a run down on various transportation options when headed to the colorful Mediterranean city of Marseille from Paris.
>>Need to know where Bordeaux is, exactly? Check out this informative map of France.
>>Read more about getting around France.
>>Thinking of using Marseille as a base as you travel around Provence or the Cote d’Azur? Check out our picks for hotels near Marseille’s Vieux Port.

I will almost always recommend you travel by train when in France. France has an extremely well connected high speed train network (TGV), which can whisk passengers from one end of the country to another at speeds of more than 200 mph. This means that taking the train will almost always be faster than driving.
The TGV connects Paris to Marseille via several trains leaving daily from Paris’ Gare du Lyon. Trains arrive at Marseille St-Charles train station. The journey takes 3 hours.
>>Read more about Train Travel in France and the TGV: France’s high-speed train.
>>Traveling by Eurail pass? Read more about your Eurail options. 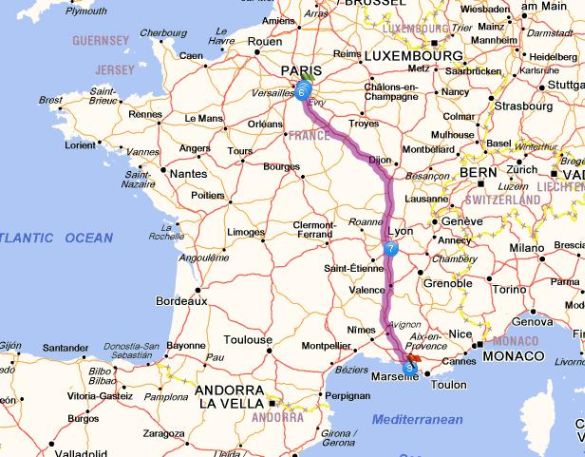 While taking the train will for sure save you time, if you decide to rent a car in France and make the drive to Marseille (preferably at a leisurely pace with stops along the way) the journey should take about 7 hours (note this is more than twice the amount of time it takes by train). It is about 776 km (482 miles).
From Paris, take the A6 south to Lyon and then continue on the A7 to Marseille. Keep in mind that you will also be paying tolls and gas is much more expensive in Europe. You can make a trip planner, estimate gas and toll costs and get specific directions on the Via Michelin website.
>>Read more about Renting a Car in France and Driving in France
>>Check out some ideas for summer road trips through France that include Marseille.

Because the French government encourages people to use the rail system, there is no national bus system in France. Because of this, ti is nearly impossible to travel inter-regionally in the country by bus. While buses connect towns and cities within regions, there are no buses that connect regions. While you may be able to arrange hopping off a Eurolines bus on one of its longer international routes, there is simply no easy way to travel between Paris and Marseille by coach or bus. You are better off on the train.
>>Read more about Bus Travel in France.

You are probably better off taking the TGV from Paris to Marseille, but if you choose to fly it is fairly easy to get affordable flights in between the two cities. Marseille has an airport (MRS), which is located 27 km northwest of Marseille. While Air France has the most daily flights between the two cities, major discount carriers EasyJet and Ryanair also fly into Marseille.
Keep in mind while the flight time is certainly shorter than the plane, by the time you factor in transportation to and from the airport, security etc. flying will probably take more time than taking the train.
>>Read more about flights in France, airports in France , cheap flights to Marseille and budget airlines that fly to Marseille.