How to Get from Paris to Nice 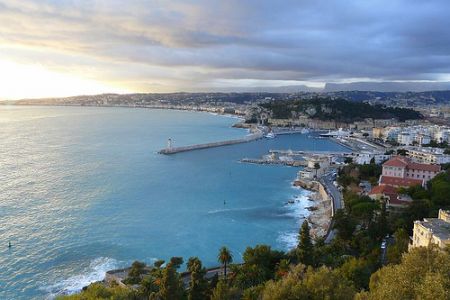 For those traveling from Paris to Nice (which is a good home base for checking out Cannes and nearby Monaco), here are the best ways to get from the capital to the warmer, impossibly glamorous climes of the French Riviera:

While I am always one to recommend taking the train in France, Nice is actually home to France’s second largest airport in France (airport code NCE) and there are many daily direct flights from Paris to Nice as well as from 90 other destinations via 50 airlines.
Flying is certainly an easy way to get between Paris and Nice and is both affordable and fast, but it is also important to keep in mind that you have to take into consideration transportation to and from both airports. Since airports are not located in the center of cities and towns, like train stations often are, you’ll have to figure out how to get to and from the airport and add that to your lead time.
>>Read more about cheap flights to Nice and budget airlines that fly to Nice.
Transportation to/from the Nice Airport:
There are two buses that have frequent service from the Nice airport into the city center:

Train is by far the easiest and fastest way to travel around France. While taking the train can seem more expensive than some of your other options, it is the fastest, most convienent way to travel around the country.
From Paris, you can take the TGV high-speed train. There are several trains leaving from Paris each day and the journey takes about 5.5 hours. You will need to make reservations in advance, and the trip costs anywhere from €50-€100.
>>Learn more about France Railpasses,  get schedules and book your travel
If you are continuing your travels from Nice and hoping to explore more of the Mediterranean coast, there are many trains that connect Nice to Cannes, Monaco (only 40 mins away) and the Italian Riviera.

If you are renting a car in France and want to drive (perhaps with some stops along the way), the journey from Paris to Nice takes about 8-9 hours covering approximately 950 km. Because gas costs more in Europe than in the U.S., it is important to take fuel prices into consideration before you decide to drive from Paris to Nice – as well as any extra fees if you’re going to drop the car off in a different location than where you picked it up.
Directions:

Although taking the bus can save you some money if you are traveling in Europe on a tight budget, there is simply no easy way to take the bus from Paris to Nice. Unfortunately, big European bus company Eurolines only offers routes to destinations outside France (for example, if you are traveling from London to France, the bus is a good option).
If you are determined to take the bus, you’ll probably have to change buses several times or opt to take a bus tour that has a stop in Nice. However, the journey could take as much as 15 hours, compared to just 5.5 hours via train. (In other words, buy a Eurail pass and take the train).
>>If you are headed to Spain from the French Mediterranean, check out how to get from Nice to Barcelona.
>>Read more about your transportation options to get around France.
Other reading that may interest you when planning a trip to the South of France: