How to Get from Paris to Normandy 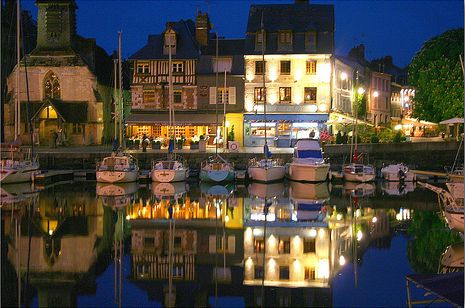 A region of France marked by its creamy Camembert, hard cider and many, many cows, Normandy is a region that lies along the English Channel coastline east of Brittany. Rolling green landscapes, wide sandy beaches with dramatic limestone cliffs and, if course, the D-Day beaches and memorials make Normandy a great place to visit when in France.
It’s also known for its especially friendly people, and best of all – it’s just a short train ride from Paris! In fact, getting from Paris to Normandy is as easy as an 1-2 hour train ride or a little bit longer drive. And when you get there, you will certainly not have a shortage of great activities to choose from.
>>Check out a few of my favorites: Top 10 Things to do in Normandy.
>>If you are planning on visiting Mont Saint Michel in Normandy, read more about getting from Paris to Mont Saint Michel. 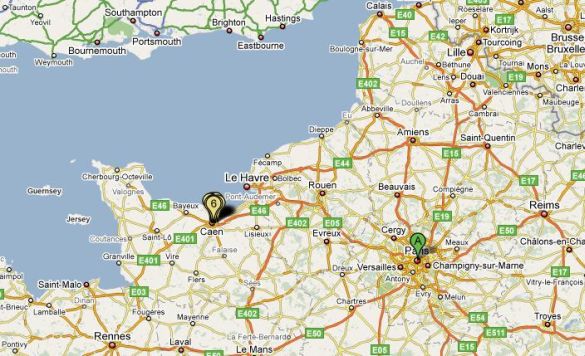 Here is what you need to know to get to Normandy:

I  almost always advise people to take the train when choosing a transportation option in France. While renting a car in France can allow you some added convenience and independence for touring the smaller villages and towns not connected by rail, taking the train in France will almost always save you time. France has such a well connected TGV high-speed train system, so you can be whisked to your destination at more than 200 mph (a whole lost faster than if you were Driving in France, trust me).
All major towns and cities in Normandy are well connected by rail, though keep in mind that buses between smaller towns and villages are infrequent and can be difficult to use. That being said, while exploring Normandy’s rural areas is probably best done by car, it may be a good idea to first take a train from Paris to one of the towns or cities in Normandy and then pick up your wheels from there.
TGV trains leave from Paris’ Gare Saint Lazare several times a day to many towns and cities in Normandy. The French rail network SNCF provides daily and regular links from Paris:

Getting to Normandy from Charles de Gaulle Airport
For those heading directly to Normandy from the airport, you can be in Normandy within 3 hours of stepping out of CDG. From the airport, take RER Line B for a 30-minute ride to Paris Nord train station. From there, switch to a Line E train for a 5-minute hop to Gare Saint Lazare where you can board one of the many trains headed to Normandy.
>>Read more about Train Travel in France

Because Normandy is located so close to Paris, it is definitely not worth flying from Paris to this region of France. For those coming to Normandy from an international destination, it is probably best to fly into Charles de Gaulle Airport in Paris and then hop on the train to Normandy from there.
Paris’ Beauvais airport is also less than an hour’s drive from Normandy and has flights from Dublin, Shannon and Glasgow; note that Beauvais is NOT close to Paris, so if you want to go directly look into renting a car and bypassing Paris altogether.
There are a few smaller airports in Normandy if you are determined to fly directly into the region. Ryanair offers some low-cost daily flights to the region from the UK and Ireland.

From Paris take the A13, which passes near Evreux, Rouen and Caen through Normandy. The drive from Paris takes about 2 hours, depending on where in Normandy you decide to head.
>>Read more about renting a car in France, and driving in France.
photo credit: solea20 on flickr