Getting from Paris to Provence 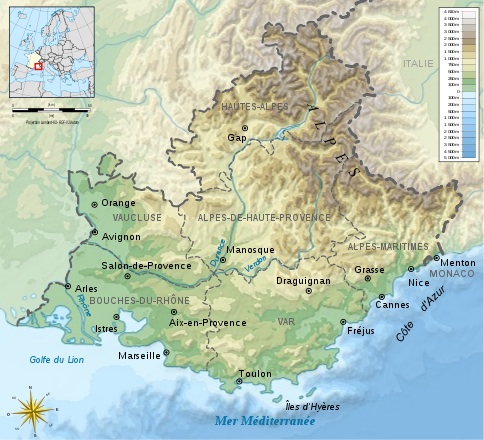 Ok. Hi. I know you came to this page because you want to know how to get from Paris to Provence. Don’t worry; that information is below. But first, I feel it is my sworn duty to clear up exactly what and where Provence is, and what and where Provence is not. And in case you thought you already knew, let me spring this on you: There actually is no place in France called Provence.
I know; I just blew your mind, right? Good. Now we can get started on the learnin’.
The official name for the southeastern-most region in France is Provence-Alpes-Côte d’Azur. As the name suggests, that covers a lot of ground – from its western border with the Languedoc-Roussilon region to its eastern border with Italy, and from the Mediterranean Sea in the south to a lot farther north than you’d expect. Within this region are the administrative départements of Var, Vaucluse, Bouches-du-Rhône, Alpes-de-Haute-Provence, Alpes-Maritimes and Hautes-Alpes.
Some consider Vaucluse and Bouches-du-Rhône as “Provence,” leaving the “Alpes” part to Alpes-de-Haute-Provence, Alpes-Maritimes and Hautes-Alpes. But that doesn’t account for the Côte d’Azur, widely assumed to be located in Alpes-Maritimes, and it leaves out Var altogether, which is a sizeable chunk of real estate. Of course you could say, with reason, that the Côte d’Azur covers the shoreline of the entire region; but like Provence, there is no one place or département actually called “Côte d’Azur,” so… maybe it’s more of a state of mind? Also, would anyone in the Alps ever say they were in “Provence” or the “Côte d’Azur”?
So many questions; so many insouciant French shrugs. One thing everyone can agree on, though: There is no place on a map you can definitively point to and say, “This is Provence.” (Sorry.)
Now that we’ve established that you’re going to a make-believe place, how about we figure out how to get there?

How to Get From Paris to Provence

One acronym, three little letters: TGV. It stands for Train à Grande Vitesse, and remains your single best way to get from Paris to the South of France.
If you want to get to Arles, Miramas or Aix-en-Provence*, you’ll have to take the TGV to Nîmes and switch to an auxiliary line. For anything east of there, you’ll be going first to Marseille (with a stop in Avignon*) and then switch trains. That TGV line goes from Marseille to Nice, with stops at Toulon, Hyères, Les Arcs Draguignan, Saint Raphaël, Cannes, Antibes and Nice. To get from Nice to the border, including Monaco, you’ll have to switch trains again.
*These stops are at dedicated TGV stations outside the city center. Frequent shuttle service is provided.
The train from Paris to Marseille takes about 3.5 hours and will cost you between €73-105, so fiddle with the train times to get the best deal. From Marseille to Nice is another 2.5 hours, and costs around €32.
As for inland trains… well, this is the rare occasion where the French rail system will fail you. It will get you to all the major cities on your itinerary the trains are fine, but everything else – like those dusty Provençal towns you’ve been dreaming of – a car is your best bet. Which is a delightful lead-in to… 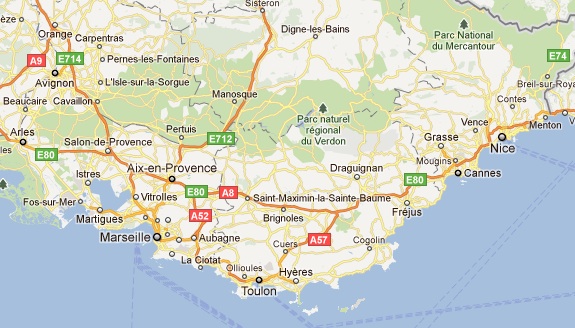 Your route is going to be the A6-A7 south out of Paris, which takes you just west of Dijon and through Lyon, and then to the smaller highways per the map above. It’ll take you about 7-8 hours to get to Marseille, and then another 3 hours from there to Nice. And tolls. And gas. Seriously, just take the train down to the region, and rent a car from there to get around.
Because I want to be a help after having destroyed your dream of visiting a place called Provence, I’ve broken down our Provence-area information, so you can plan your perfect trip. First, we have the logistics:

Next we’ve got itinerary ideas:

And finally, some specific activities that are seriously awesome and will make your trip one for the books: