Getting from Paris to Rennes 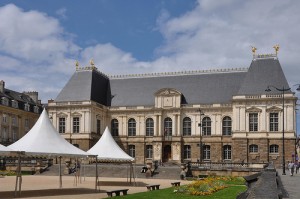 Rennes is an active university city located in the heart of Brittany that has been a major crossroads since Roman times. Woven by canals that can be explored by boat and sitting at a major intersection of highways linking France’s northwestern cities, Rennes is a great place not only to be based in during your travels in Brittany and Normandy; it is also a lively city that can be explored by boat via its waterways and has an active nightlife with a wide array of places where you can pop in for a pint. For those trying to get to Mont Saint Michel, Rennes is also the popular connection point for those headed out there.
>>Need to know where Rennes is, exactly? Check out this informative map of France.

I almost always suggest that people take the train in France when trying to get from point A to point B. With a well-connected, efficient and speedy rail system with lots of TGV (high-speed train) lines connecting Paris to cities across France, taking the train is almost always faster than driving in France.
It is super easy to get to Rennes from Paris via train. There are TGV trains that run several times daily from Paris’ Gare Montparnasse. The train takes about 2.25 hours and should cost around €50 round trip. If you have a bit more time but not as much money, there are slower trains that cost less and stop in smaller towns along the way.
From the airport
If you are headed directly from Rennes from Charles de Gaulle airport in Paris, you can also catch a TGV from the airport to Rennes. There is a TGV that runs directly from CDG Terminal 2 station to Rennes city center. Keep in mind that direct trains only run a few times a day, so you’ll want to make sure you check your train and plane schedule before counting on a swift transfer from CDG.
From the airport, follow signs for “Gare—TGV” (located in Terminal 2).
>>Read more about Train Travel in France and the TGV: France’s high-speed train.
>>Traveling by Eurail pass? Read more about your Eurail options.

If you are renting a car in France and planning on driving from Paris, Rennes is easily reached by car. It’s about a 3.5-hour drive from Paris via the A11 and A81, which are toll roads. The journey is about 350 km.
>>Read more about Driving in France and Renting a Car in France

For those coming to Rennes from the UK, there are a few budget airlines that fly into the airport located about 5 km from the city. Flybe offers routes from Southhampton and Aer Lingus has a flight from Dublin. However, it just doesn’t make sense to fly to Rennes from Paris. Taking into account time needed to get to/from the airport, get through security, etc. you’ll end up spending a lot more time flying than simply taking the train through the Chunnel and connecting from there.
>>Check out other major airports in France.

France has no national bus system, meaning that while buses connect cities and towns within regions of France, they cannot be taken for inter-regional travel. While Rennes has an impressive bus system in the city (there are more than 50 bus lines in Rennes), you cannot take a bus from Paris to the city.
>>If you’re traveling between France and another country, though, there is the Eurolines bus company that has gotten good marks from budget travelers.