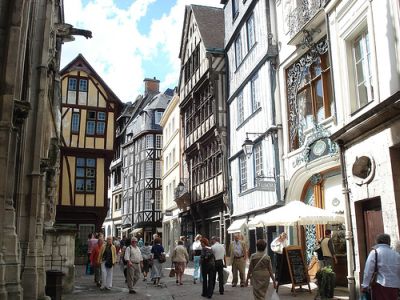 A region of France marked by its creamy Camembert, hard cider and many cows, Normandy is located along the English Channel coastline between Brittany and the northern tip of the country. Rolling green landscapes, salt tinged winds, wide sandy beaches marked by dramatic limestone cliffs and stone farmhouses dotting broad fields and apple orchards make Normandy a great place to visit when in France.

In addition to frothy cups of hard cider, D-Day beaches, beautiful landscapes and creamy cheese, Normandy is also known for its especially friendly people—all while being located just a short train ride from Paris. In fact, getting from Paris to Normandy is as easy as an 1-2 hour train ride or a couple hour drive.

If you are planning on doing a day-trip from Paris to Monet’s Gardens in the Normandy town of Giverny, read more about Getting from Paris to Giverny. 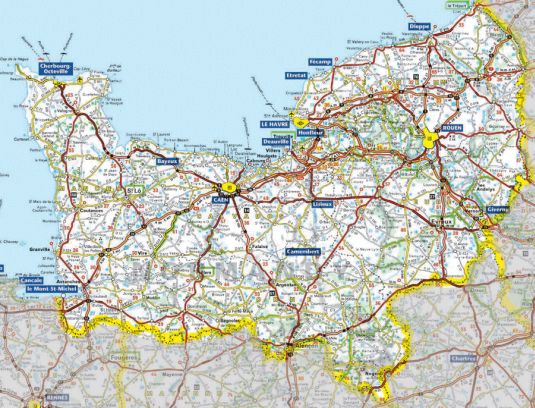 Here is a run-down on how to get to Normandy:

I will almost always advise people to take the train when choosing a transportation option in France. While renting a car in France can allow you some added convenience and independence for touring the smaller villages and towns not connected by rail, taking the train in France will almost always save you time. Because France has such a well connected TGV high-speed train system, you can be whisked to your destination at more than 200 mph (a whole lost faster than if you were Driving in France).

All major towns and cities in Normandy are well connected by rail, though keep in mind that buses between smaller towns and villages are infrequent and can be difficult to use. That being said, while exploring Normandy’s rural areas is probably best done by car, it may be a good idea to first take a train from Paris to one of the towns or cities in Normandy and then pick up your wheels from there.

Getting to Normandy from Charles de Gaulle Airport

For those heading directly to Normandy from the airport, you can be in Normandy within 3 hours of stepping out of CDG.

From the airport, take RER Line B for a 30-minute ride to Paris Nord train station. From there, switch to a Line E train for a 5-minute hop to Gare Saint Lazare where you can board one of the many trains headed to Normandy.

Because Normandy is located so close to Paris, it is definitely not worth flying from Paris to this region of France. For those coming to Normandy from an international destination, it is probably best to fly into Charles de Gaulle Airport in Paris and then hop on the train to Normandy from there.

Paris’ Beauvais airport is also less than an hour’s drive from Normandy and has flights from Dublin, Shannon and Glasgow.

There are a few smaller airports in Normandy if you are determined to fly directly into the region. Ryan Air offers some low-cost daily flights to the region from the UK and Ireland.

Airline Sky South also has flights directly into the Caen airport from Shoreham in the UK.

It is easy and fast to reach Normandy by car for those coming from the UK or Paris. From the Chunnel, the drive takes about 90 minutes via the A28/E402.

From Paris, take the A13, which passes near Evreux, Rouen and Caen through Normandy. The drive from Paris takes about 2 hours, depending on where in Normandy you decide to head.

Because Normandy is just a quick hop across the English Channel (or La Manche as the French call it), there are several ferry services that travel between the UK and Ireland to Normandy. Ferries from England and Ireland dock at Cherbourg, Ouistreham, Le Havre and Dieppe.

Transmanche Ferries has daily service from New Haven to Dieppe and Le Havre. June through October, there is also service between Portsmouth and Le Havre and Newhaven to Le Havre. www.transmancheferries.com

There is also ferry service that runs from Brittany. There are daily services to Caen and Cherbourg from Poole. For more information, check out www.brittany-ferries.com.

Those coming from Ireland can hop on a Celtic Ferry, which connects Rosslare and Cherbourg www.irishferries.com