Hotels near La Croisette in Cannes 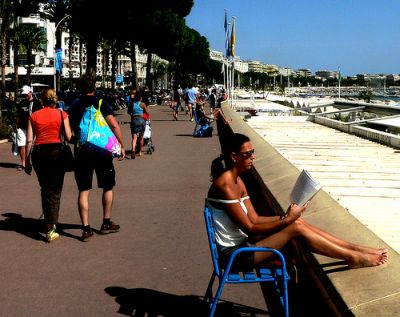 Famous around the world for its Film Festival, Cannes is a glamorous city located along the Mediterranean coast of the French Rivieranear equally glamorous Monaco, Italy and Provence. While Cannes is prohibitively expensive while the festival is happening, there are actually a wide variety of hotels at a range of prices in Cannes during the other 11 months and two weeks of the year.
At the epicenter of Cannes is Boulevard La Croisette, which translates as “Avenue of the little cross” and is a prominent road in the city. Stretching along the shore of the Mediterranean, La Croisette is known for its Palais des Festivals et des Congrès, where the Cannes Film Festival is held. The boulevard is also lined with many expensive shops, restaurants and elegant hotels like the Martinez and Majestic.

This is not a hotel, but a two-bedroom apartment with a living room, private garden and shared bathroom – perfect for families or couples traveling together. It’s smack in the centre of Cannes, and you can walk anywhere. Because it’s an apartment and not a hotel you’ll have to book as far in advance as you can, but the great rates are worth it – especially in the off-season.
>>Book Alexandre Apartment

This is a no-frills hotel in a million-dollar location. It’s in walking distance from the train station, super close to Rue d’Antibes (shopping!), and you can skip right on down to the beach to work on your natural tan. You cannot beat this place for the price/location factor.

Hotel Florella is about halfway between the train station and La Croisette – five minutes in either direction. They have regular hotel rooms and small apartment, which have terraces! And for you late risers breakfast is served until noon, either downstairs or in your room.

The Corona is a smaller hotel, with only 20 rooms – but they’re air-conditioned, which is a plus in the heat of the summer. And rare among smaller places, it also has an elevator. It’s not that fancy, but it’s clean, simple and ideally located. I’d put it on my list of solid choices.
>>Book Hotel Corona

The Chanteclair is good for solo budget travelers – it’s safe, super cheap, and the owners and staff are always available and generous with their advice. Like the other hotels on the list, it’s in a great location as well – just step outside and into the Cannes craziness of La Croisette!

This is more in the center of town, although everything is within walking distance. For those of you who don’t love doing absolutely nothing on vacation, they have a gym, sauna and jacuzzi. They offer easy access to private beaches and can hook you up with excursions both on land and sea.

Azurene is a small hotel, with only 16 rooms – perfect if you don’t like the impersonal bigger hotels. It’s simple, clean, comfortable and definitely in a top location. And they have triples, which is good when you’re traveling with friends.

The Best Western Mondial is a newly renovated and designed hotel in the heart of Cannes. There are 49 rooms total, including 8 deluxe rooms and 2 suites with a sea view – perfect for a splurge without spending George Clooney-level money, especially in the off season. And they’ve got wifi!

Hotel de France is just 120 meters from the famous La Croisette. The hotel has been renovated to reveal its original Art Deco style and has air-conditioning and WiFi access throughout. On the top floor there is a sunny roof terrace with a beautiful sea view, and sun beds for those who want to be above the fray – and they also have their own sun beds on the beach as well. Chic!

Hotel America is situated right in the center of Cannes and has a 24/7 reception desk and bilingual staff. Rooms are decorated with modern elegance and have air-conditioning, sound-proofing, WiFi, minibar, marble bathrooms, hair dryer and laundry service.
>>Book Hotel America

This four-star hotel is actually Cannes’ oldest hotel on La Croisette. The chic hotel offers 76 rooms and suites, Bar le Cercle and restaurant Le Park 45 as well as a terrace and garden, WiFi internet access, air conditioning and satellite tv. As the oldest hotel on the Croisette and it has been completely revamped in 60s style.
>>Book LLe Grand Hotel

Located right on La Croisette, this is a larger hotel with 168 rooms and apartments, a swimming pool, garden, air-conditioning, ocean views, and a lounge where you can pitch your next movie script. It also gives you access to a private beach with sun beds and a beach restaurant.
Photo by luiginter; hotel pictures courtesy of hotel websites
Here are some other links to help you plan you fabulous trip to Cannes!