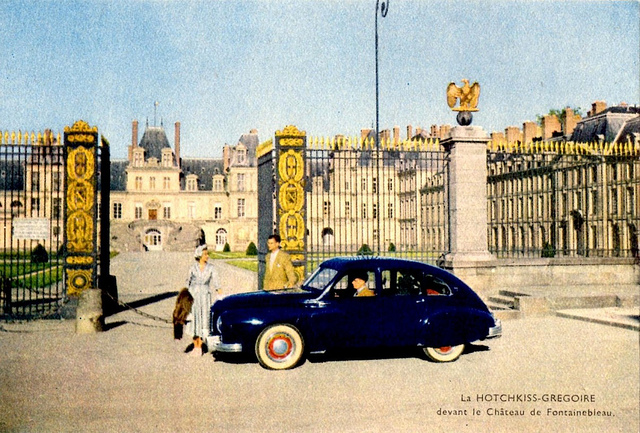 Any self-respecting guidebook will tell you that Versailles is a good day trip from Paris. They usually put Fontainebleau in that category as well, as they should; it’s a massive château outside of Paris that’s definitely worth a visit. But unlike Versailles, and even though it’s farther away from Paris, Fontainebleau doesn’t seem so much as a day away from Paris as “Hey, we just got done lunch and have some time to kill, how about we go to Fontainebleau?” There’s something about it that seems so much more doable on a whim.
I think it’s because the palace is right in town – or rather, the town built itself around it at a much closer proximity than Versailles. After Versailles, Fontainebleau’s entrance seems like somebody’s front yard – there’s a regular street with modern traffic going right by it, which depending on your level of romantic inclination can seem like either a fascinating juxtaposition or an jarring reminder of reality. But like a secret garden, once you pass through its gates the traffic fades away and you’re transported into another time, when gardens were works of art and everyone’s favorite color was gold.
What I’m trying to say is, put Fontainebleau on your list! Here’s exactly how to get there.

By Train (and bus)

Trains leave roughly every two hours from Gare de Lyon and take about 45 minutes. When you arrive, you’ll see local buses right outside the station. Take Line 1 (Lilas/Château) to the Château stop (about 20 minutes). It costs €1.90, and you pay the driver as you get on. Some buses will have recorded announcements for each stop and some will not, but the bus driver usually shouts “Château!” and that’s the stop. In any case, each bus stop has a sign with the stop’s name clearly marked.
Once you get off, there are two ways to enter the grounds:

The ticket office is in the front yard, and you’ll need one to take a tour of the palace itself. However, the gardens and park are free to roam around to your heart’s content. In the summer months, you can even take a rowboat out on the pond!
Note that there are actually two train stations, technically – one for each direction. This means that when you return, it won’t look like the same place you left from. Also, the restaurant/bar next to the Paris-direction train station is actually really nice; if you have some time before the train, you can grab a drink on their terrace (and use their bathroom).
Photo: aldenjewell