How to Get From Paris to Quimper 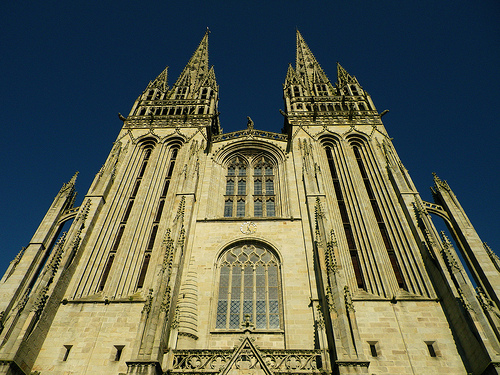 Quimper (pronounced CAMP-ay) is a wonderful town in the Brittany region. A river runs through it! It has lush green areas, a great church, tasty food, and a fun, vibrant atmosphere that makes you want to stick around for a bit.
Which is a good thing, because in terms of France, it’s a haul to get to. A lot of people don’t seem to know just how “out there” the Breton peninsula is; but spend a night there, see just how long it takes the sun to set, and you’ll realize you should probably be on London time, not Central European time.
If you’re taking the train from Paris to Quimper, you’re in luck, though – there’s a TGV line that goes to Quimper, so it cuts the trip down to about 4.5 hours as opposed to almost 7 if you’re driving.
The train leaves from Paris Montparnasse station, and they run about every two hours. It will cost you between 75 and 100 euro, depending on which time of day you choose to travel. There is some beautiful scenery, though, and someone else is doing the driving – so kick back, pack a great lunch, and enjoy the ride.

To give you a sense of just how far you’re traveling, check out this map:

Yikes! You pass Rennes and Le Mans, perfect towns for a pit stop and a little lunch. Otherwise, it’s a pretty straight line out to Quimper. Out of Paris you want to look for signs for the A10/E5/Palaiseau/Étampes/Bordeaux/Nantes/Antony/Massy/Longjumeau); from the A10, it’s onto the A11/E50 (watch for signs for A81/Rennes/Nantes/Le Mans/Chartres), then the A81/E50 (signs for Rennes/Laval). After that it’s the slightly smaller highways – the N157 to the N136 to the N24 to the N165. From there you’re home free.
Lest that sounds confusing, no worries – it’s mostly merging from one regional road to another, and everything is well marked and clear.
Or you could just take the train, and nap your way to Brittany!