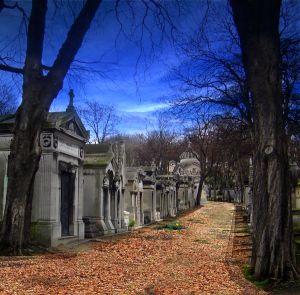 When people talk about Paris sightseeing, they mean French architecture and world famous paintings -spots like Notre Dame, the Louvre and the Eiffel Tower. But just behind these top three tourist attractions is a grave site that may be the least-talked about, most-visited place in Paris.
Tucked in Paris’ eastern 20th arrondissement is the famous Père Lachaise Cemetery. Here, among the remains of great French writers, leaders, philosophers, artists and war heroes, is the final resting place of music legend Jim Morrison of The Doors. As the fourth most-visited tourist attraction in Paris, Morrison’s grave is by far the most popular grave site in the entire cemetery. Morrison’s tombstone is always littered with flowers, music paraphernalia, letters from fans and a small crowd of people taking pictures next to the site.
Morrison actually spent his last days in Paris, where he moved to in March of 1971 to concentrate on his writing and to take a break from performing. It was in the City of Light that he made his last studio recording anddied at the age of 27 from an accidental heroin overdose. He is buried in the “Poet’s Corner” of the cemetery among men that he once named as great influences on his lyrics, including French poets Arthur Rimbaud and Charles Baudelaire. 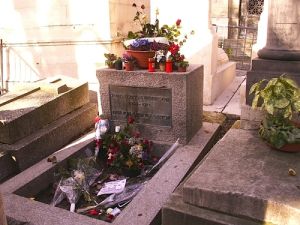 Much to the chagrin of Père Lachaise officials, Morrison’s grave site has seen graffiti and other destruction over the years. Fans and visitors have destroyed two of his headstones, left graffiti on nearby headstones as well as left marijuana at his grave site. A commemorative bust of Morrison was sculpted to honor the 10th anniversary of his death, but was stolen in 1988 by vandals. The latest headstone to grace Morrison’s final resting place is flat-stone with the Greek inscription “ΚΑΤΑ ΤΟΝ ΔΑΙΜΟΝΑ ΕΑΥΤΟΥ,” which means “True To His Own Spirit” and is rumored to have been selected by Morrison’s father.
Although the grave brings many visitors to Père Lachaise Cemetery, officials have perceived the grave mostly as a nuisance. People entering the cemetery illegally over fences at night and hosting parties at Morrison’s grave (leaving behind litter of wine bottles, drug needles and graffiti) test the patience of officials. A stone block was also placed over Morrison’s sealed grave after many attempts by fans (fanatics really) to unearth his body. In fact, the vandalism and destruction got so bad, French cemetery officials threatened to remove Morrison’s remains at the expiration of the thirty year lease on his grave.
Regardless if you are a rock music fan, Père Lachaise Cemetery is great way to spend a few hours in Paris. The eclectic tombstones, winding walkways, statues and large shady trees iprovide an interesting and scenic (albeit creepy) place to visit. Plus, the place is free, which makes visiting this historical cemetery well worth your time.