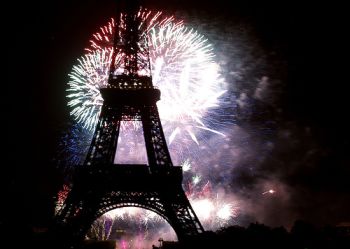 Even with the pomp surrounding Christmas in France, the French certainly have enough steam to carry on with celebrations through the New Year. In fact, Paris was recently ranked as one of the Top Ten Spots to Celebrate New Year’s Eve and the entire country has grand celebrations in honor of the close of the year and the beginning of a new one.
New Year’s Eve in France is called Saint-Sylvestre, in honor of a pope during the 4th century and who has no direct relation to the New Year, but whose feast day just happens to be December 31. New Year’s Eve is typically celebrated with a feast around midnight called Le réveillon de la Saint-Sylvestre (sound familiar to French Christmas celebrations? It is!), and like the name would suggest réveillon comes from the French verb for to wake. The feast is enjoyed late the night of New Year’s Eve and the celebration is carried through until well after midnight. The feast also usually includes special and celebratory foods, like Champagne and foie gras.
New Year’s Eve is of course also celebrated with balls and parties (une soirée dansante). In Southwestern France, it is traditional to attend evening Mass the evening of Saint-Sylvestre followed by a torchlight procession into the vineyards, where mulled wine awaits revelers. (YES.)
Unlike in the U.S., where kissing under the mistletoe is a Christmas tradition, in France everyone kisses at midnight on New Year’s Eve under the mistletoe (called le gui in French). New Year’s Day in France (Jour des Étrennes) is a national holiday (i.e., everything will be closed) and is spent among friends and family, who often exchange cards and gifts in honor of the New Year. In fact, the New Year is not just celebrated on January 1, but continues for several days until January 6 (the Epiphany), in which families have celebrations and cut into a la galette des Rois (a cake with a small king figurine baked inside).

New Year’s celebrations in Paris are of course the most boisterous. There is a large and famous parade that takes place for two days around New Years. The parade starts in nearby Chantilly (the birthplace of whipped cream) and ends near the Trocadero (under the Eiffel Tower) on January 1. The parade includes thousands of performers, singers, dancers, and street entertainers that wind their way through the streets of Paris. There are also parties at the local bars and clubs, and much like in New York’s Times Square, thousands gather under the Eiffel Tower to watch the fireworks at midnight.
Cruises
Cruises have also become popular ways to ring in the New Year around France. Whether on a boat on the Seine, the Mediterranean or on one of the canals that lace the country, ringing in the New Year on water has becoming increasingly popular. Barge tours, sailing trips and cruises often have special soirees for the occasion.
Castles
Ringing in the New Years the way French nobility once did has also become popular. Private events at Chateau in the Loire and all over France have celebrations. For example, the four-star Château de Fère near Reims (the Champagne capital of France) hosts a Saint-Sylvestre dinner, party and fireworks to ring in the New Year.
Southwestern France
In Southwestern France, it is traditional to march out to the vineyards by torchlight following the midnight mass where they enjoy vin chaud and ring in the New Year.
Ski Towns
The snow blanketed mountains just seem to add to the festive spirit if you spend New Years in the Alps. In Chamonix, for example, revelers ring in the New Year with Champagne in the town square and fireworks.

New Year’s Eve is typically a formal, dressy affair in France, and even celebrations among family tend to include fairly formal attire. Remember, that when it comes to casual, the French are usually stepped up a few notches over us Americans, so don’t hesitate to go all out in the wardrobe department, especially if you are going to a party or celebration in Paris. For those not sure how to pack for that winter vacation to France, you can check out my post on what to wear in France in the winter for some ideas.

It will be pretty chilly throughout France over this holiday. In Paris, the average temperature around this time of year is about 40 degrees Fahrenheit. In the Alps, depending on elevation, temperatures will be in the 30s and along the Mediterranean you can expect temperatures in the low to mid 50s.
>>More information on Weather in France