Paris – Then Prague – for a Romantic Getaway 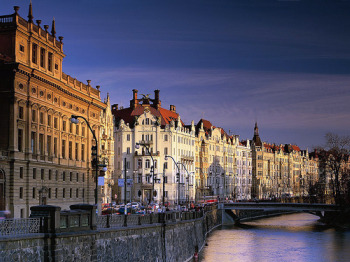 It’s hard to look at any travel website right now and not be inundated with enticing Valentine’s Day travel deals. (Whether or not those “deals” are actually going to save you money is another thing entirely.) And since so many people think of France when they think of romantic vacation destinations, it’s not surprising to see offers to spend time over the Valentine’s Day holiday in Paris, Provence, or along the Cote d’Azur.
But if you’re looking for a romantic getaway that’s a little less traditional, let me suggest you look east.
The city of Prague can be incredibly romantic, especially in the old city. I won’t go so far as to claim it’s anything like Paris, but for awhile after the Iron Curtain fell more than a few people were saying Prague was then like Paris was in the 1920s – a haven for artists with a real Bohemian flair. And it does have a river running right through the middle of it – although it’s a little chilly in February for romantic strolls along the bank. Of course, a chill does encourage snuggling, but you might still want to pop into a cafe for a cup of coffee afterwards.
Prague’s Old Town has an odd sense of foreboding that lends itself well to moonlit walks, and it’s packed with sumptuous architecture that makes for the perfect backdrop to hand-held couple self-portraits. And all of the beauty of the city comes at a bargain price – especially if you’re more accustomed to the high tourist prices in Paris.
While you may have better luck finding a deal flying into Paris than you will on airfare to Prague (since Paris is a big European hub), you’ll get much more for your money on just about everything else in Prague. When it comes to accommodation, Prague wins easily – the cheap hotels in Prague are still 3- or 4-star affairs, whereas you’d be lucky to find a 1-star hotel room (that’s not in the center of Paris) for the same price.
If you’re unconvinced that a trip to Prague for Valentine’s Day (or any romantic getaway) will sweep your special someone off their feet, then why not combine the two? Fly in and out of Paris, since (as mentioned) you’ll probably find better round-trip flights into Paris from the US anyway, and then take advantage of one of those budget airlines in Europe to spend a few days in Prague before you head back home. You’ll get the “wow” factor of Paris, the under-discovered gem of Prague, and you may just be able to afford a longer trip because your budget stretches further in the Czech Republic. And that way, everybody wins.
photo by kruhme