Summer festivals abound in France – from May through September, it seems as though every town you visit has a bandstand set up in the main square, delicacies for sale, and traditional activities unique to the area.
Of course, because France lives and dies by the seasons, there are festivals all year ‘round. But summertime is party time, and you’d do well to plan your itinerary around some of the more awesome events.
By far, the most popular summer festivals in France involve music in every conceivable form. To give you a leg up on what’s happening when and where, here’s a list of some of the most popular French summer music festivals! 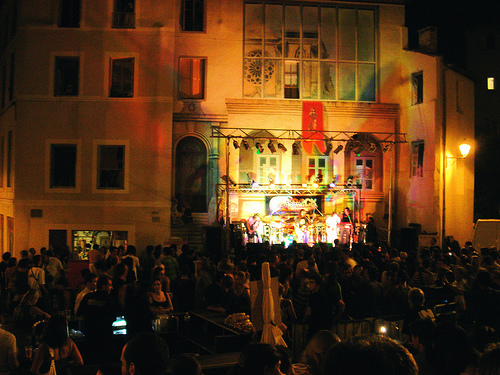 Held every June 21 nationwide, the Fête de la Musique, or Music Festival, is practically a national holiday. From morning to, well, the next morning, From Paris to Perpignan and everywhere in between, you can barely pass a street corner without hearing music, whether live or being spun by a DJ.
There are huge concerts by the leading names in rock. There are wrinkled old men playing accordions outside cafés. Cool jazz singers with a bass accompaniment. String quartets. Traditional French folk music. Enough reggae to shame Jamaica. And, of course, food and wine are available from bars, cafés and restaurants that have tables set outside their premises.
The big cities have more to do and see during Fête de la Musique, while the smaller towns have a stronger mix of traditional and modern music. If you have the chance to be in France on this day, you have to take part in this wonderful celebration of the start of summer, the joy of music, and the pride of a nation.
But, don’t worry if you can’t make it to France for Fête de la Musique this summer; the country is rocking all summer long. Check out other music festivals below!

Other Summer Music Festivals in France

Festival de Nîmes – This music festival is staggered throughout the entire month of July, and brings in major acts – this year we’ll see everyone from Supertramp to Sting to Santana, and dozens more. The big shows are in the fantastic Arènes de Nîmes, a Roman-era coliseum that is still in use today; check out Metallica’s most recent concert DVD to get a load of what an evocative venue it is.

>>Want to look cool while rocking out to hot music? Read my tips on what to wear in France in the summer.

Cognac Blues Passions Festival – In the mood for smooth sounds? This highly acclaimed concert series is in Cognac, running from July 5-9, 2010.
Toulouse Salsa Festival – This three-day festival (May 6-8) features shows, classes and unique spaces atnight to get your groove on!
Cosmic Trip – From June 2-5 in Bourges, this festival has a wide variety of music genres including Garage Punk, Sixties Funk and an awesome DJ Party, with acts coming from all over the world to get down and dirty.
Les Escales de Saint-Nazaire, the port of Saint-Nazaire, near Nantes, Brittany. Fifity concerts in two days, August 5 & 6, 2011.
Petit Musik – This takes place in Bouconville, in the Champagne region, July 2 & 3, 2011. If you’re anywhere near there, or even in Paris over those days, it’s worth a trip to this festival of dance, music, acrobats and more that all take place in a rural setting in the idyllic countryside. Truly unique.
>>Not a music fan? Check out the last word on the best beaches in France.
For more seaside fun – and a more traditional take on music festivals – visit the Festival du Chant de Marin in Paimpol, a small town on the Channel in Brittany. Usually held over the first weekend in August (they haven’t released dates yet for 2011; no rush, guys, really), this festival treats the public to traditional sailors’ songs sung by groups from all over the world. There’s also a huge exposition of ships in the harbor. Way cool, and way, way local.
>>Plan your summer trip to France with the Summer Travel Guide.