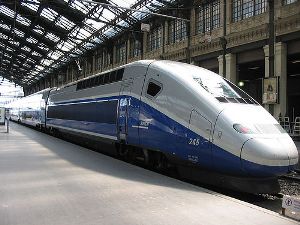 One of France’s best-known icons is the TGV, the super-fast train network. It’s fast, reliable, affordable and safe – and more often than not, the best way to get from one place to another in France.

What is the TGV?

TGV stands for Train à Grande Vitesse, or “high speed train,” and is the cornerstone of the SNCF national rail system. It first hit the rails in 1981 with a route between Paris and Lyon, and has since expanded to connect every major city in France (see below) as well as sneak over the borders of neighboring countries. TGV trains have synchronized  systems with local and regional trains, so you’ll never have a crazy layover when traveling long distance.
It should be noted, however, that in some cities there is a separate dedicated station for TGV trains – so check your tickets to make sure you’re at the correct station, and if you need to get from one station to another to switch lines.

Here are the cities you can get to by TGV:

They’re still planning and building the network to include more French cities as well as a line into Italy via Torino (Turin).

Many people say that low-cost airlines offer better prices than the TGV. However, if you consider that you need to travel to and from the airport, plus the extra fees they tack on, the TGV suddenly becomes the affordable alternative.

You can book a ticket up to 60 days ahead of travel, and the  TGV official website makes it an easy task. You just need to type the cities, choose the date when you want to leave and the site will offer you several alternatives, highlighting the best one.