The Cathedral at Rouen: The inspiration for Monet's famous series 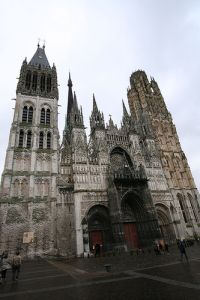 Rouen is a town in Normandy known mostly as the place where Joan of Arc was burned at the stake, and as the home of the Gothic cathedral made famous by Monet’s series of paintings. Monet’s series is so comprehensive, as you stand in the square and gaze at its façade you’ll feel as though you have seen the cathedral before. A walk inside the cathedral, however, gives way to a whole new vantage point, complete with unimaginably high vaulted ceilings. Visiting the cathedral has inspired countless travelers to learn more about Monet’s series of paintings – but you can get a head start and know before you go!
Monet’s series
Whether you are an art buff or a casual art appreciator, most people who know anything about the French Impressionists have learned about or seen Monet’s famous series of paintings of the cathedral at Rouen. Called by some as the “climax of Impressionism”, the series aimed at showing the influence of the atmosphere and light on subjects. Monet wanted to capture the way something looks at one instant during the day, and the way natural light can affect how something is seen as well as interpreted.

During the 1890s, Monet worked on several series of paintings representing the same subject at different times of day. The most famous of these series focused on the cathedral at Rouen, whose Gothic architecture made for a dynamic subject. Although the 31 paintings of the cathedral are dated 1894, the majority of the paintings were “done” over two lengths of time in 1892 and 1893, when Monet rented two different rooms facing the cathedral. The paintings were later finished in his studio in Giverny.
The cathedral at Rouen is large and impressive, though Monet’s efforts were not aimed at showing off the architectural magnitude of the Gothic cathedral. In fact, Monet wanted to demonstrate the power of a painting in representing the dynamic quality of light and atmosphere, thus giving life to something that had remained relatively unchanged for centuries. Monet would sometimes be working on as many as ten canvases at a time, waiting for a fleeting cloud, early morning fog or bright sun ray to change the atmospheric conditions of the cathedral. 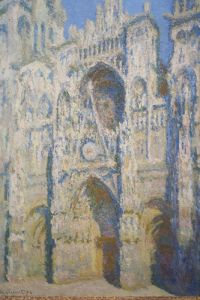 The series of cathedral paintings was a huge success, changing traditional ideas about paintings. It also changed Impressionism; Monet’s avant-garde take on reflecting a moment in time changed the genre forever. Writer Georges Clemenceau said of Monet’s paintings, “In front of the twenty views of the building by Monet, one notices that the art, in its persistence of expressing the nature with increasing exactitude, teaches us to watch, to perceive, to feel. The stone itself is transformed into an organic substance, and one can feel how it changes in the same way that a little moment of the life is followed by another one.”
Monet’s famous cathedral series is still so popular that in May 2000, Sotheby’s auctioned one of the canvases for more than $24 million. If you don’t have $24 million, though, you can check out the cathedral yourself and get some inspiration before looking at Monet’s impressive series.
Many of the Rouen Cathedral series can also be found at Paris’ Musee d’Orsay, and there is also an extensive collection of works about the series – the perfect way to bring Rouen and its famous cathedral to you!