Things To Know About Using A Eurail Pass In France 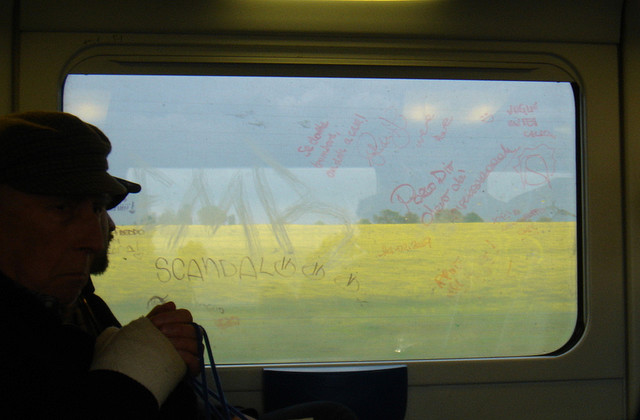 I traveled with a Eurail Pass at the tender young age of 40 last year, so that’s the first thing you need to know – it’s not just for backpackers! But even though I’m a wizened traveler and a train addict, there was a definite learning curve. Here’s what I learned while traveling with a Eurail Pass through France. Enjoy!

Although the Eurail Pass allows for a lot of freedom, it doesn’t mean you should shy away from planning.

With the kind of Eurail Pass I had, you can travel for 15 days out of two months. But on each day you travel, you can take as many trains as you’d like. (There are cut-off times for overnight trains, FYI.) So if you want to cram in as much as possible, you’ll need to make a plan for your trip.

For example, during a few days in Paris I wanted to take road trips to some of the northern cities. So I got out my map of France and the Eurail train timetable that came with my pass, and like an army general, set out my plan of attack. Now, granted, I was doing recon for this site, so I wasn’t as interested in full immersion traveling. But I wanted to give you an idea of what’s possible, so here are some (long) days of travel I planned out:

Decide how you want to use your Eurail Pass.

When you’re planning your trip, instead of thinking about it linearly, think about having a base and using your pass to travel from there. I chose Paris as my base to explore Northern France because to get to many of these cities from the South of France, you have to go into Paris first and then back out to get to the destination. So it made sense to start off four hours closer to all the places I wanted to go.

However, I also used it to get to Paris in the first place, as well as to take trips to Berlin and Rome. Using your Eurail Pass to get from Point A to Point B – with as many stops as you’d like along the way – can be paired with an open-jaw plane ticket for your entire vacation. (An open-jaw ticket is one that lets you fly into one destination, and fly out of another. So you can fly from New York to Paris, and then return to New York from Rome.)

You have to make reservations for certain trains.

Regional trains and “smaller” train lines – like the one that goes from Nice to Ventimiglia, Italy – don’t need reservations. You just hop on with your Eurail Pass and you’re good to go. But if the train normally needs reservations (meaning, if it has assigned seating), you’ll need to have an actual ticket.

Luckily, train station ticket people are more than familiar with how Eurail Passes work, so just slap your pass down on the counter and let them know where you want to go. The only question they usually ask you is whether your pass is 1st or 2nd class, so they know where to put you on the train.

You can’t get on any train you want.

While you can certainly check on a country’s train system website (like SNCF for France) for times and such, your Eurail Pass timetable is the final word on which trains you can actually get on. This doesn’t hold for regional trains, of course, where reservations are not necessary; but for major train routes, there are a limited number of seats reserved for Eurail Pass holders. So, again, you need to plan ahead!

Even with your Eurail Pass, you’ll still have to pay sometimes.

Don’t worry, you won’t have to pay a lot. In France, my usual tariff for TGV trains was about €3. My trains from the South of France to Berlin were about €30 total – although the most expensive one, from Paris to Frankfurt, included a full lunch! And a newspaper. So, it all evens out. Just make sure you know which ones you’ll need money for, because French train stations (and ticket machines) don’t take American cards.

Always have your passport with you.

You need it because the conductor needs to check the name on your ticket with your passport. Once you read the literature that comes with your Eurail Pass this should seem apparent, but I want to include it here because a lot of people like to leave their passports in the hotel safe. I put my Eurail Pass inside my passport, so I always had them together. I also clipped a pen onto my passport, because you need to…

Wait until you get on the train to write in the date, but make sure it’s the first thing you do.

The way you “validate” your Eurail Pass is to write the date of your travel on the ticket face. You have to do this even if you have a reservation. (And, FYI, you have to write it “European” style, with the day first and then the month.) Train conductors can at best give you the hairy eyeball, and at worst issue you a fine. So, it’s really important that you do it!

But, make sure you do it AFTER you board the train, because you never know what could happen (strikes, plans changed, etc.) and you can’t erase a date you’ve written, just cross out it – meaning you’ll lose one of your travel days.

If you’re ready to buy your Eurail Pass, or if you want to learn pretty much all there is to know about Eurail Passes, check out the BootsnAll Eurail Pass site – it’s fantastic and very comprehensive.