Tipping in France: The Final Word 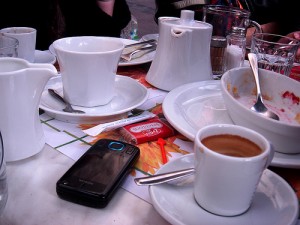 Of all the cultural differences I’ve seen in this fine French Republic, I think there is not one that creates more abject terror in the hearts of visitors than figuring out what to tip for services in France.
Well, fair traveler, fear no more: We’re going to set you straight so when you get here you’ll be tipping – or not tipping – like a pro.

OK, here it is, once and for all: a 15% gratuity is already added to every single restaurant, bar and cafe check in the country. Whether you see it or not, it’s there because it’s the law. Cast aside your service industry guilt, and become one with this fact. Don’t worry about whether owners are paying it out, or how, or when, or anything else. Just believe it and move on.
Now. That being said, people do leave money on a table or counter after a meal or a drink. This is the time you want to get rid of the spare change you don’t want to bring back home with you. If you absolutely, positively must have a mathematical equation to remain calm when the bill comes, stick to €1 for every €20-€25 of the total.

Leaving nothing after being served a drink is normal; €0.15 for a €3 glass of wine is more than OK and can be left on the table when you head out, although the great majority of bars and cafes require you to pay for each drink at the time you receive it by presenting you with a receipt. They may stand there and wait or they may run to another table for a moment, but put your money on the little dish they give you as soon as you can.

This can get complicated, but I tend to go by the €1 rule – €1 for each bag the guy helps me bring up to the room, €1 for the room service waiter, €1 per day left at the end of my stay for housekeeping.
Concierges are another matter. If they helped you once with a routine issue or question, a thank-you should suffice. If they gave you a decent amount of assistance or helped you make reservations every night, a nice box of macarons or a tenner is welcomed. If you treated them like your personal tour guide or if they got you into the toughest tables in town on a moment’s notice night after night, €20 is considered standard.
After all, what did you think those envelopes and stationery in the hotel room are for, writing letters to the folks back home? Ha! They’re to put your concierge tip inside with a nice thank-you note.

Tip the person who checks your coat €1 per item, but only if there is a formal coat check person. If the waiter or owner grabs your coat and sticks it somewhere else because otherwise it’d be in the way, just give a warm smile and a pleasant “Merci.”

Other People to Tip in France

If you’re at a theater and someone shows you to your seat – whether it’s the movies or the opera – give them €0.50.
Tip a gas station attendant up to €1 if they do anything else for you other than pumping gas.
Guides and chartered bus drivers should get between €3 and €5 for their services.
If you have any other tipping questions, let me know and I’ll answer them for you!