Top 10 Things to do in Normandy 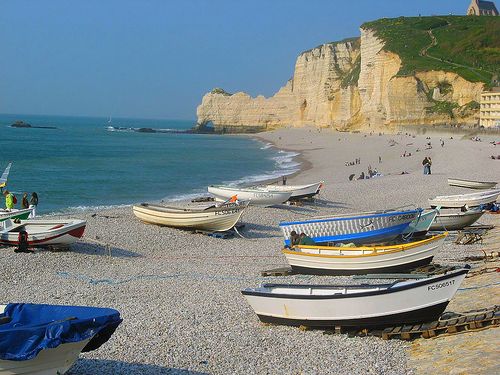 Characterized by apple orchards, fresh cheeses, rolling green landscapes and dramatic seaside cliffs, Normandy is the region of France located to the northwest of Paris along the coast of the English Channel. Though once part of Britain (though it’s been firmly in French hands since the 13th century save for a few British channel islands off the coast), there remains a Norman influence here that gives the region a slightly different cultural feel than other parts of France.
Normandy is a mostly agricultural area made up of bocages—a patchworks of fields divided by high hedges. Normandy is also where much of the country’s dairy is produced. Cattle breeding, cider production and fishing are also important industries that help define this lush and beautiful region of France. With temperate weather year ’round (it’s rainy and chilly in the winter and relatively sunny and mild in the summer), Normandy is a great place to visit during almost any time of the year. From beaches to countryside, most will not regret making the trip to this region of France.
>>Read more about weather, regional cuisine and more in Normandy 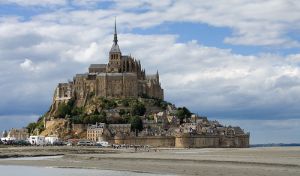 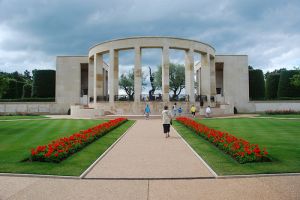 History buff or not, a visit to the D-Day beaches is definitely worth your time if you find yourself on the coast. For those who had family fight WWII, the memorial honors American soldiers who died in Europe during WWII. It is located in Colleville-sur-Mer on a cliff overlooking Omaha Beach (one of the main landing beaches of the Normandy Invasion). I recommend taking a guided tour of the area to capture the full meaning, both past and present, of what many consider hallowed ground.

3. Check out Monet’s gardens in Giverny 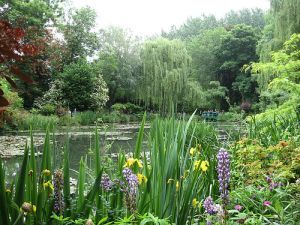 You’d imagine that a painter most famous for his beautiful landscapes would probably surround himself with, well, beautiful landscapes. And that’s just what he did! Located just a 1 hr. by train from Paris (it is an easy day-trip from Paris), Monet’s house and gardens in Giverny are well worth a visit. You can see the water lilies that inspired the painter and stroll through the absolutely stunning gardens that were Monet’s muse for so many of his well-known prices of art work.
While Giverny can get rather packed with tourists in peak summer months, it is still well worth putting up with other curious travelers to check out these spectacular gardens.
>>Read more about Monet’s Garden at Giverny and if you are coming from the City of Light, Getting from Paris to Giverny

4. Soak up the art and architecture in Rouen 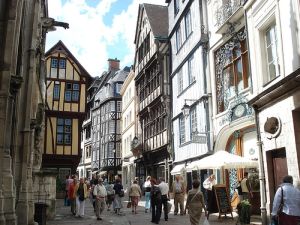 Rouen is a great place to be based for your other Norman adventures. With its stately spires soaring above the city, the beautiful Gothic cathedral at Rouen (a favorite subject of Monet, who did a series of painting of the cathedral) is enough in and of itself to warrant a visit to this Norman city. However, Rouen’s beautifully restored Medieval quarter is a living museum of Normandy-style architecture.
Rouen is also where Joan of Arc was tried for heresy and burned at the stake—and you can visit the very spot where the heroine met her demise.
>>Read more about the Cathedral at Rouen and the other impressive Cathedrals of France

5. Chow down on herring and/or scallops in Dieppe 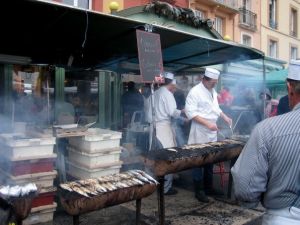 Nestled among dramatic limestone cliffs on the English Channel (or La Manche as the French say), Dieppe is a busy port city of about 35,000 with a salty, authentic old harbor where fishermen unload their loads of fresh fish and famous scallops alongside gawking tourists and British day-trippers.
It’s just a quick ferry ride from Newhaven in the UK and the closest beach town to Paris. The big beaches, fresh seafood, annual herring festival and dramatic cliffs make it a worthwhile visit, especially for your foodies out there.
>>Read more about Visiting Dieppe and going to the Herring Festival in Dieppe

6. Visit the old port in Honfleur 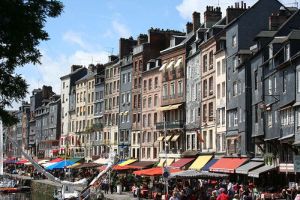 The top getaway spot for many Parisians, Honfleur is a small city (pop. 8300) with a charming and attractive port. The heart of Honfleur centers around the old port, or Vieux Bassin, where you’ll find humble fishing boats alongside super-modern yachts. Once the launching point for explorers headed across the Atlantic (many settlers in Québec left from this port), Honfleur has a rich cultural history and is full of brightly colored buildings and grand Norman-style wooden houses that hug the old port—a stark contrast to the modern, industrial port of Le Havre just across the Seine.

7. Sip your way along the Cider Route 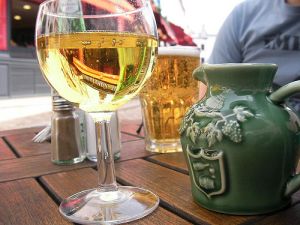 Normandy is famous for its abundance of apple orchards and cider making, so no trip to the region would be complete without indulging in some of the local beverages. There is a clearly signed route called the “Route du Cidre” (complete with apples marking the signs!) that is about 40 km long and passes by the producers of cider in the region. Following the Route du Cidre will not only allow you to sample the local ciders, but you’ll also be able see and explore some of Normandy’s small, quaint villages—a must-do when in Normandy.
The route starts 35 km east of Caen in Camembert and goes through many small villages, where you can stop along the way and sample different ciders. You’ll also be able to try Calvados (an apple brandy form Normandy) and Pommeau (a traditional Normandy apéritif).

8. Check out the Bayeux Tapestry 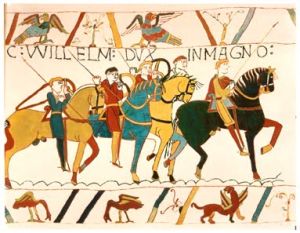 Bayeux receives millions of visitors each year who flock to this small Norman city to check out the immense embroidered cloth (it’s not technically a taspestry) known to the French as La Tapisserie de la Reine Mathilde. The 230-foot long taspestry is one of the largest and most detailed in the world, and the painstaking embroidery tells the story of the events leading up to the Norman invasion in 1066.
While the tapestry itself will probably only be of minor interest to most, Bayeux is actually a great town to explore after you’ve made the obligatory stop to check out this piece of historical signifigance. The first town liberated after D-Day and one of the few towns in the region to survive WWII rather unscathed, Bayeux has narrow streets crammed with wooden-framed Norman houses and has its very own Gothic cathedral. 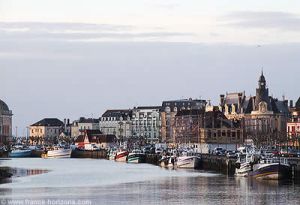 Mussels have long been one of the favorite dishes of France, and Normandy has some of the best mussels in the world. What better place to enjoy moules marinière – a delicious dish made of mussels simmered in a shallot and white wine sauce – than in one of the true gems of Normandy. Unlike Deauville, its flashy sister city across the river that is sometimes called the Monaco of Normandy and packed with designer boutiques and 5-star hotels, Trouville is a charming town with an active working fishing port. This means that not only will you be able to soak up local culture and be able to afford Trouville, but you’ll also primely situated to enjoy the freshest seafood. 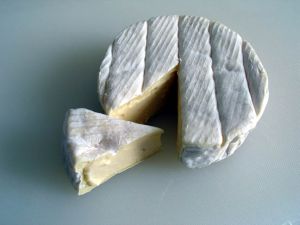 Any country with over 300 types of cheese will always remain in my heart. It is no wonder that in a region chock-full of cows, Normandy is also famous for its cheeses. Most famous of all is Camembert (which, not surprisingly, comes from the village of Camembert), a creamy, mild brie-like cheese. If you are interested in seeing how the cheese is made, you can visit the President farm (the major Camembert exporter) located in the heart of Camembert.
The guided tour (€5) shows you how the cheese was traditionally made, allows you to view a collection of vintage cheese making tools, and most importantly allows you to sample plenty of the village’s famous cheese.
photo credits: American memorial, Giverny, Rouen, Honfleur, cider tasting, trouville, normandy