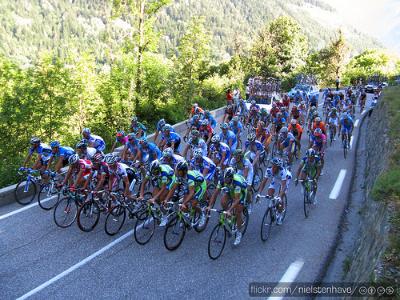 While the Tour de France is primarily the cycling world’s premier race, it’s also one of the biggest spectator sporting events in the world each year. So whether you’re interested in cycling or just happen to be traveling through France in July, you may want to see what the fuss is all about. Here, then, are some tips for watching the Tour de France.

The atmosphere surrounding the Tour de France is really something to behold, and at times it can feel like it has very little to do with the actual race or the riders. The start towns buzz with anticipation (and the party usually continues long after the riders depart), the finishing towns party long into the night (after watching that day’s winner bask in the glow of his victory), and all along the route locals set up picnics at the roadsides and make a day’s outing of the whole thing.
They’ll bring transistor radios to their picnic spots, or show up in camper-vans equipped with TVs and satellite dishes so they can keep up with the progress of the race as it gets closer to their position and then follow what happens after the riders zoom by. It’s an incredibly social vibe, and if you know a little French and have the makings of your own picnic lunch you just might make a bunch of new friends by the day’s end!
A few things to know if you’re making a day of it and waiting for the race to come to you:

One final tip – these guys move fast. It’s not like watching a marathon go by. The whole thing is usually over in less than a minute (unless you’re on a mountain stage, in which case it’s a little bit slower). If you’re looking to take pictures of the cyclists as they go by, you’d do well to practice a bit beforehand with your camera, preferably by taking pictures of cars speeding by.
original photos, top to bottom, by: Niels ten Have and .kol tregaskes