Tour de France: The Course Flips Upside Down in 2009 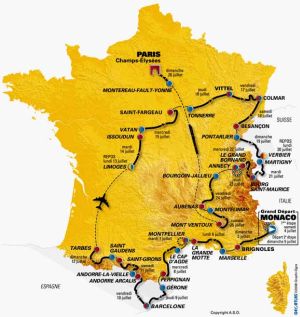 Ok, Tour de France fans, the time has come. The official route map is out and Lance Armstrong wants back in on the action. With talk of the first week being the toughest ever and a summit finish on Mount Ventoux the day before the Paris finish, there is certainly plenty of speculation and drama. Add into the mix the former 7-time Tour de France champion wanting back in the race after retiring in 2006 and a longer than usual time trail opener in Monte Carlo and you’re guaranteed to have one hell of a show this summer.

This year will mark the 96th Tour de France and the 3435km route is sure to challenge the riders in new ways and delight cycling fans across the country as they watch the battle for the yellow jersey with the world’s top cyclists battling across France. The race kicks off July 4 and goes through July 26, with plenty of big hill climbs and fast time trails in between. This is also the first race since 1981 to start on the Cote d’Azur (the “Blue Coast”). The last time the race started along the Mediterranean in 1981, the last Frenchman to win the Tour de France, Bernard Hinault, claimed victory. Does this mean the French might have a chance at taking back their race this year, or will Armstrong once again trump his competition and end up wearing the yellow jersey at the end of the race?

Read More:
While I have watched the Tour de France whiz past me in the Alps, I do not claim to be any kind of cycling expert. In that vein, if you are interested in reading more about this year’s Tour de France route, you should check out the Steephill TV site for course info, player reactions to the course and more.