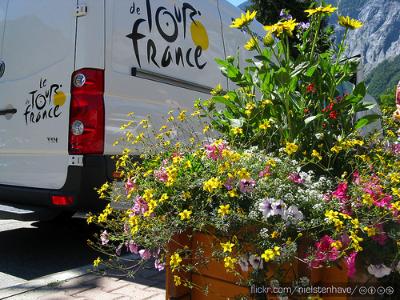 For most tourists, just catching a bit of the Tour de France on the TV in the local bar or maybe even seeing the riders whoosh past is enough to feel like they’ve “been there, done that.” But in case you’re interested in something more – in case you’d like to put yourselves in the cycling shoes of the riders or at least follow in their footsteps – there are Tour de France vacations out there for you.
Generally speaking, these kinds of vacation package tours fall into two categories – cycling and spectating. With the cycling vacations, you’ll get to ride some of the same roads the professional cyclists in the Tour de France will cover (albeit at a slower pace and not at the same time!). Spectating vacations instead happen during the race, and you’ll be taken from viewpoint to viewpoint along the race route to watch as the riders go by each day.
For those who want to cycle, watch the Tour and see the French countryside, there are some companies, like Viva Travels, that do custom guided cycling tours during the Tour de France.
The best part about these kinds of vacations for cycling fans is not only do they get to watch a lot of Tour de France action – you are also assured to eat well along the way. I mean, who doesn’t love French food? As you move through the different regions of France you’ll get to sample great regional cuisine in France and many cooks also offer up special Tour de France menus that correspond with the stages of the tour. Food blogger Marilyn Kennedy does an annual Tour de French Cuisine on her blog, if you want to check out some of food you could be eating.
In both cases, all the logistics of getting from place to place, including finding the best spots to watch the race, will be taken care of for you – which is a huge load off your back. Because the Tour de France covers parts of the country that aren’t as heavily visited by tourists, the getting-there-and-back part can be complicated and expensive – especially as many of the prime spectator spots require renting a car in France. And if you choose one of the cycling vacations, not only will all of the nitty gritty details be worked out for you, there’s also a bike provided for you in most cases. You just can’t beat these Tour de France vacation packages for convenience!
As you might expect, these package tours aren’t cheap. You could duplicate the concept on your own, but it would require a lot more legwork on your part – so you’re definitely paying for the time saved by having someone else do the organizing – and of course most of these packages also include your airline tickets, so that’s part of the expense. The prices will vary by the duration of each tour, whether there’s cycling involved, and whether there’s any “backstage” or “VIP” access included in the package. Another variant that can change the price involves the Tour de France route, which changes every year. Some destinations are more popular than others, and if they’re on the route that year they’ll come with higher-priced hotel rooms.
A simple online search will produce several tour companies offering Tour de France vacations, so you can browse through the options and find the one that suits you best.
original photo by Niels ten Have