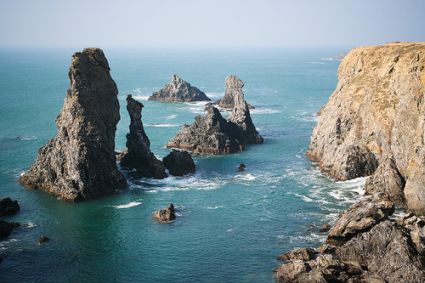 As its names might suggest, Belle-île is in fact one of the France’s most beautiful islands. With stunning cliffs, quaint seaside hamlets, pastel colored homes, green countryside and jagged rocky coastlines, Belle-île’s beauty has long inspired sailors, authors like Flaubert and Dumas and painters like Claude Monet and Matisse. Located off the Brittany coast and accessed by ferries leaving from Quiberon (about 14 km away), Belle-île’s population swells nearly tenfold during the peak tourist season(summer in France); but as Brittany’s largest island, Belle-île provides plenty of space to explore and get away from the crowds.
Because of warmer ocean currents that flow past Belle-île, the island tends to experience warmer temperatures and has Mediterranean flora growing on the island, which are not found on the nearby coastline. You will also find lots of cozy spots to indulge in delicious fresh seafood, crêpes, cider and other delights from the regional cuisine of Brittany.

Measuring about 17 km by 9 km, Belle-île is subdivided into four areas and has about 150 villages. For a really clear idea of where everything is situated, check out this interactive map.
Le Palais 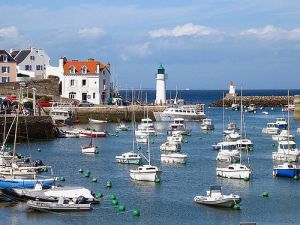 The largest town of the island and its main access point (the ferries from Quiberon dock here), Le Palais is generally the launching point for explorations of the island. The dramatic Vauban citadel distinguishes and dominates the port here.
Le Palais is the most populated town on the island, but with only a few thousand full-time residents, you’ll be amazed at how fast you can be in the “countryside” of the island from the bustling town center.
Sauzon
Known for its colorful houses and large port, Sauzon is located on Belle-île’s northern coast. Here you’ll find spectacular rock formations and the famed Grotte de l’Apothicaire (Apothecary’s Cave), where waves crash in from two sides and Phare des Poulains lighthouse. There are also many trails that start from this seaside town, making it a worthwhile stop on any trip to Belle-île that includes a nice hike.
Bangor
Bangor is most famous for one of the most impressive lighthouses in France, constructed in 1935 and sitting 84 m above the sea. Bangor covers the cote sauvage or “wild coast” side of the island and is known for its dramatic scenery like the famous aiguilles (needles) of Port Coton, severe rocks jutting out of the sea in spiky clusters. The rocky coast and Donnant beach (where swimming can be dangerous, but has amazing surf) greatly inspired Monet, who did series of paintings of this part of Belle-île.
Locmaria
Locmaria is a small maritime village that features the white Notre Dame de Bois Tord chapel. If you really want to get away from it all, Locmaria is the place to do it.

What to do & see on Belle-île

Hike the coastal footpath
If you are looking for a challenging and beautiful adventure while visiting Belle-île, you may be interested in walking some of the 95 km circuit that follows the entire islands coastline. Although this is clearly too far to do in one day, portions of this trail can also be great day hikes and is a nice way to see the cote sauvage section of the island.
Rent bikes or a motor scooter 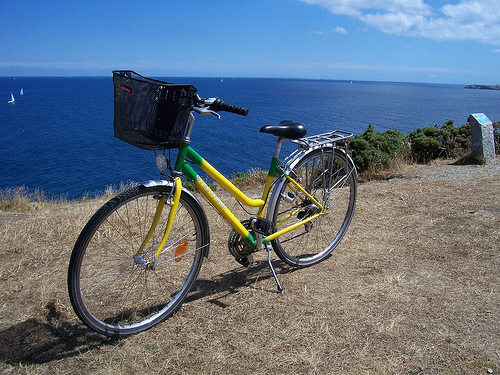 Although you can rent a car on Belle-île for your visit, the island is small enough that you may be better off forgoing the car and renting a bike or motor scooter and seeing the island that way. From Le Palais, you’ll find plenty of places that rent out both bikes and motor scooters for about €15-€35 per day. This is not only a cheap, easy way to get around the island, but it’ll also allow you to take in the panoramic views as you work your way around the island quickly.
Visit the Vauban Citadel
The star shape is what will first stand out to you about this structure (which served as a prison for famous revolutionaries and a succession of state enemies, including Ben Bella of Algeria), but you will also be also be astounded by its size. Built along stylish and ordered lines by the great fortress-builder Vauban, it is filled with doorways leading to mysterious cellars and underground passages, endless sequences of rooms, dungeons and deserted cells.
(Open daily: April–June, Sept & Oct 9.30am–6pm; July & Aug 9am–7pm; Nov–Mar 9.30am–noon & 2–5pm; €6.10)
Go to the beach
Because much of the coastline on Belle-île is marked by rocky cliffs, there are only a few places where visitors can find a beach for swimming. On the sheltered Port Kerel there is the 2-km Plage des Grands Sables, which is the biggest and busiest beach on the island.
>>Read more about the Best Beaches in France
Go camping
There are about 10 campsites scattered around Belle-île, which are open from about mid April or early May through September or October. With beautiful views and plenty of places to pitch a tent and enjoy comforts like showers, restrooms and picnic tables, camping can be a great way to enjoy the natural beauty of Belle-île while saving a few bucks.
Check out the Côte Sauvage 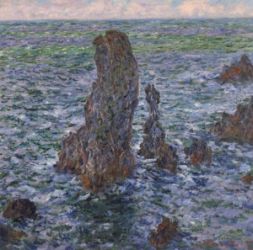 Any trip to Belle-île is not complete without a visit the Côte Sauvage (wild coast). With its rocky “needles,” sea caves and rough Atlantic waters, you definitely should not miss its drama. For Impressionist fans (or those who have paid a visit to the Musée d’Orsay in Paris), you may also want to see the coastline that inspired Monet’s series of paintings.
Take a walking/cycling tour
The local tourist office in Le Palais offers both walking and cycling tours for guided visits around the island. If you are just hanging out on Belle-île for the day or weekend, this can be a great way to see its best sights.

As Belle-île is about 17 km off the Brittany coast, the only way to get to there is by ferry. You can ferry your car to Belle-île, but not only will you have to shell out quite a bit of cash (transporting a small car costs nearly €120 plus passenger fares); the island is small enough that you really won’t need your car. There are also enough car/scooter and bike rental places where you can rent quick transportation for much less.
From Quiberon
The shortest crossing to Belle-île is from Quiberon. SMN operates car/passenger ferries year-round, which takes about 45 minutes and drop passengers off at Le Palais. There are also fast passenger ferries that run in July and August, which take only 20 minutes. The fast passenger ferry also runs from Quiberon to Sauzon starting in April through mid September. There are five crossings per day year ’round, and up to 13 crossings per day in July and August. Ferries cost about €25.
>>Planning on hanging out in Quiberon before or after you head to Belle-île? Read more about visiting Quiberon
From Vannes
Navix operates a ferry from Vannes to Belle-île between May through mid September. The ferry ride takes just over an hour and costs about €20.
From Lorient
In July and August, SMN operates a fast passenger-only ferry once a day to Sauzon. The ride takes an hour, runs once daily and costs about €15.

Where to Stay on Belle-île

As you may have read above, there about 10 different campsites scattered around Belle-île, which can be a great budget accommodation option while visiting Belle-île.
For those who want a roof over their heads and don’t want to shell out a whole lot of cash, there is the Auberge de Jeunesse Haute Boulogne, a hostel is located just north of the citadel in Le Palais.
If you’re looking for a higher-end experience, the Vauban citadel houses a lavish and chic hotel, which has rooms that range from €120-€450 per night.
The Le Goeland Hotel in Le Palais has affordable beds, a lively bar/brasserie downstairs and is a reliable choice.
If you are one who prefers to stay in bed and breakfasts in France (rather than hotels in France or hostels in France), then you will also find a plethora of chamber d’hôte and gites around the island, which offer up a comfortable “in-home” experience at usually very affordable prices.
Photo Credits: Les aiguilles , Sauzon, bike on belle ile