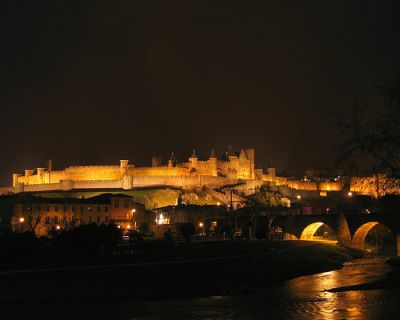 Carcassonne is a fortified medieval walled city in southwestern France. It was classified as a UNESCO World Heritage site in 1997 and welcomes more than 3 million visitors annually (about the same amount of people who visit Mont Saint Michel each year).
Carcassonne is essentially a castle that is also a city (La Cité de Carcassonne) around which the modern city, or Ville Basse, grew. The Cité de Carcassonne’s double row of fortified walls run almost two miles long and accentuated by 56 imposing watchtowers.
While there are a way too many touristy souvenir shops hawking tacky medieval inspired wares, once you’re inside walking the narrow cobblestoned streets and taking in the sights you won’t mind dodging the other tourists you may encounter.

What does the name “Carcassonne” mean?

In 760 “Pepin the Short” wrested southern France from the Saracens, except for Carcassonne – he just couldn’t breach it. But he figured that eventually, they’d starve within its walls and surrender. But Dame Carcas had other ideas – she fattened up their last pig, and had it thrown over the city’s ramparts. Their enemies figured if they could waste such an animal, they must be well-stocked. Once the enemies retreated, Dame Carcas rang all the bells of the city in celebration. “Carcas sonne” (Dame “Carcas rings” the bells) is where the name of the city came from, or so they say. 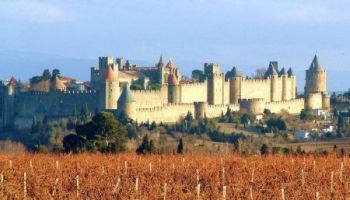 3500 BC: Settlement near the present-day site of Carcassonne can be traced back to when the city of Carsac (an old Celtic name) was an important trading hub.
100 BC: Carcassonne was first identified as being strategically important and the city was fortified by the Romans, who named the city after Julia Carsaco and later called it Carcasum.
462: The Romans finally officially ceded Carcassonne to a local Visigoth King who had ruled over Carcassonne since 453 and who built even more fortifications to protect the city from outside invasions.
508: The Visigoths of Carcassonne fought and won against King Clovis, who tried to overtake the walled city.
725: Saracens from Barcelona conquered Carcassonne and ruled until 759, when they were defeated by King Pepin the Younger.
1067-1096: Carcassonne became the property of a viscount of Nîmes.
1096: Pope Urban II blesses the cornerstone of the new cathedral.
12-13th Centuries: Carcassonne played a role in the Albigensian Crusades. In 1209 Simon de Montfort captured Viscount Trencavel, let him die in prison, and named himself the new viscount of Carcassonne. Montfort was instrumental in adding more fortifications to the city.
1240-1250: King Louis IX took rule of the city  and also added to the outer ramparts, boosting the reputation of Carcassonne as impregnable.
1659: The Treaty of Pyrénées reduced Carcassonne’s military, and the city turned its focus from war to wool making.
1849: The French government decided Carcassonne should be demolished, which was not received well by the people of France. There was a campaign to save the fortress as an important historical site, and in 1853 works began to refortify and renovate the city.
Present Day: Carcassonne has been re-built to its former glory and is now one of the most visited attractions in France.

What to do in Carcassonne 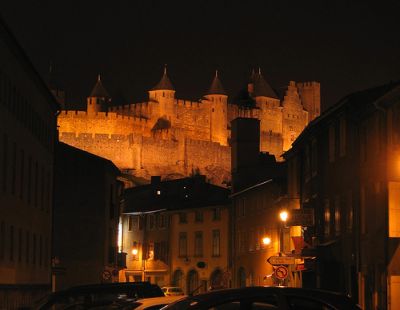 Take a Tour
There are tours offered in many languages that will teach you some of the history and point out points of interest in Carcassonne. I highly recommend taking one these tours, as they will not only give you a brief lesson on the history of the site, but also allow you to check out the fortified walls and watch towers.
Go to the Festival de la Cité
If you find yourself in France in July and close to Carcassonne on Bastille Day (July 14), there is the Carcassonne Festival de la Cité when the entire city celebrates with special music and theatre performers.
Stroll the streets, eat cassoulet and visit the Ville Basse
You can also spend a whole day simply strolling the Medieval cobble stoned streets, checking out the city and maybe even snacking on a traditional cassoulet (a hot stew-like dish made from white beans, pork, sausage and sometimes a hunk of duck).
While la Cité (the walled section of Carcassonne) can be tourist hell in high tourist summer season, the Ville Basse located in the shadow of the impressive fortress is well worth checking out as well.

While there is a hostel located within the walls of La Cite de Carcassonne, you might be better off (specially in July or August in France) staying below the fortress in the Ville Basse. Here you will find a wider range of accommodation options, which range from budget to high-end.
>>See Hotels near Carcassonne (coming soon)

Carcassonne is located in southwestern France between Toulouse and Narbonne and just a short distance from the Canal du Midi (for those taking a barge cruise in France).
By Train
I am almost always an advocate of taking the train in France and this is definitely a great mode of transportation for getting to Carcassonne. Carcassonne is located on the TGV rail line linking Narbonne and Toulouse. It is only a 50-minute train ride from Toulouse and costs about €10.
By Car
If you are renting a car in France and will be driving to Carcassonne, then you should know that cars are not allowed with the walls of la Cité during the day in the summer months (too many tourists clog the narrow streets).
There are many roads that come to Carcassonne coming from various other destinations in France. The map below from the Carcassonne official tourism website shows the roads leading into and from Carcassonne. 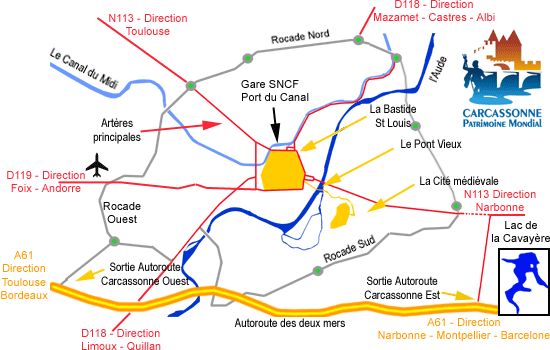 By Plane
Ryanair is the only airline that flies into the airport at Carcassonne, which is located 5.5 km from town. This means if you are coming from the U.S. or another international destination, you will need to book Ryanair to get to Carcassonne. There are also daily flights from London (Stansted).
There is a bus during the summer months from the airport into town. The Agglo’Bus leaves the train station two hours before each Ryanair flight, takes about 25 minutes and costs about €5.
By car, take the Carcasonne Ouest A61 motorway exit. And here’s a handy toll to help you find a good deal on a rental, as well as the other features of your trip.